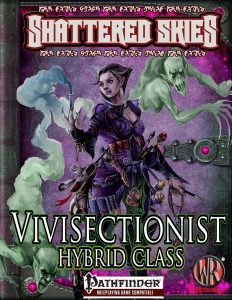 This hybrid class clocks in at 13 pages, 1 page front cover, 1 page editorial, 1 page SRD, 1 page back cover, leaving us with 9 pages of content, so let’s take a look!

Vivisectionists are locked into an evil alignment and receive d8 HD, 4 + Int skills per level, proficiency with simple weapons, bombs and light armor and the class receives a 3/4 BAB-progression as well as good Fort- and Will-saves. The class begins play with alchemy and Brew Potion and receives extract-spellcasting akin to the alchemist. The class draws its extracts from its own list of available formulae and the governing attribute here would be Intelligence. While the vivisectionist receives the bomb class feature, it is used in a different way and more in line with a very soft crowd-control, as the only level in which the ability is increased would be 13th. It should be no surprise that vivisectionists thus begin play with Throw Anything as well. Sounds much like an alchemist? Well, 1st level also yields channel necromantic energy, usable 3 + Cha-mod times per day. This special channeled energy does not cause damage, but can be used to command and heal undead – those affected by it may fall under the sway of the vivisectionist on a failed Will-save.

Starting at 2nd level, the vivisectionist receives DR 2/bludgeoning and magic, increasing this by +2 at 6th level, 11th level and 15th level. As a minor nitpick, the formatting of the DR in the class table lacks the slashes. 2nd level and every even level thereafter yield a discovery, but more on those later. Starting at 3rd level, a vivisectionist may 1/day emit a 5-ft-burst of negative energy that inflicts 1d4 damage per class level, half on a successful Will-save. As a minor formatting nitpick, it should be “+ Charisma modifier”, not “+Cha modifier”. This ability can be used an additional time per day at 8th, 12th and 18th level and it heals undead. Additionally, their channel can be used to further activate the ability more often. I assume the default standard action for activation of this Su, but would have still appreciated an activation action – and, pretty important, a note on whether this provokes an AoO. I assume no as a default, analogue to channel energy.

3rd level yields swift alchemy, which contradicts the table that puts the ability at 4th level. 5th level yields the eponymous vivisection, which allows the character to, as a free action, inject specially-charged brain matter, granting a +1d6 surge-like bonus on one skill check within 1 minute, even those requiring the taking of 10 or 20, with the choice being required after the check is rolled, but before results are made known. The interaction with taking 10 and 20 are a bit weird here, but retain their functionality, so this gets a pass. This can be used “1 + Cha modifier” (again, should be “Charisma” -I’ll stop commenting on this type of formatting hiccup now) times per day, +1/day at 7th level and every other level thereafter. Alternatively, as a move action, the vivisectionist may gain the benefits of a combat feat for the duration, but has to meet all prerequisites, with 7th level decreasing action economy for this type of activation to a swift action.

Starting at 7th level, the vivisectionist may 1/round deliver a melee touch attack that inflicts 1d8 untyped damage, +1 per 4 class levels. This also heals undead creatures, which can be a problem if you’re playing with an undead PC-race, as it means infinite healing. The attack may also be delivered via spectral hand – the spell is, just fyi, not properly formatted here. Starting at 12th level, the vivisectionist learns two alternate uses of this ability: On any given day, she may bestow a total of up to 1/2 her class level negative levels, with a maximum of 2 per touch. Alternatively, she may paralyze foes for 1/2 class level rounds, with both cases allowing a cha-governed save to resist. I assume the save to be Fort, but the ability does not clarify that. In order to use either paralyze effect or negative level, the vivisectionist must spend a swift action charging her hand. If the at-will paralyze seems OP, then because it is (RAW, it can be used infinite times per day), but the upgrade at 17th level makes clear that the intent was for paralyzing to have some sort of cap: Suddenly, negative levels and paralyze cap at class level levels/rounds per day. *sigh*

8th level adds +4 to Str and Dex and +2 hp per HD to all undead created by the vivisectionist and allows her to control 4 + Cha-mod undead HD per vivisectionist level, with 2x class level doubling as the cap for those controlled by channel necromantic energy. The wording here could be a bit more precise and elaborate. 9th level yields +4 to saves to resist negative energy, some ability drain, level drain and inflict spells. As a capstone, we have an undead-apotheosis as well as a grand discovery.

Speaking of which: The pdf contains, unless I have miscounted, a total of 13 class-exclusive discoveries and 4 exclusive grand discoveries. Grand scale corruption of wells and even larger bodies of water, a discovery that lets you rig an alchemist lab to make it generate undead-animating vapors, making a nasty weapon from a unicorn-horn…Know what? In all Wayward Rogues Publishing-pdfs I’ve covered so far, these are not only the most precise pieces of crunch, they also are inspiring and evocative. A lot of the discoveries basically ask to be made into the central plot-device of a given module. Preparing alcoholic beverages to hamper saves? That just sounds like step one of a delightfully dastardly plan, and disguise self and alter self as formulae, with the option to use a deceased person’s blood to take their appearance, makes for a delightful package that just screams “Make me a cool villain in your next game! – even when the spell-references are not properly italicized. Cooler than that: Flashes of memory can be added to the impersonation! There is also a discovery-tree called graveflesh, which provides camouflage and protection from mindless undead, a black thumb that kills off vegetation (unfortunately without stating the effect on plant creatures) or some bonus spells – the abilities which grant those, just fyi, are perfectly formatted – italicized spells and all.

The grand discoveries allow for the assumption of permanent control over mindless undead, extended command and control limits, act as a living shrine to an evil deity (which also includes desecrate -bingo, not italicized) and provides auto-undeadification for those that die within your desecration range and finally, you can spontaneously call forth large amounts of weak undead. Per se nice options, though their power ranges a bit.

The pdf closes with 4 spells, one that allows you to damage foes based on your wounds, a low-level undead-only sanctuary-variant, a variant geas that animates the target upon death to continue his quest and a variant spying spectral eye. The spells sport some minor formatting hiccups, but generally remain viable. Weird: Though they are on the vivisectionist formulae list, their spell statblocks don’t mention the class.

Editing and formatting, particularly the latter, are the bane of this pdf. While significantly improved from earlier offerings by Wayward Rogues Publishing, this still has a lot of hiccups, some of which influence the functionality of the class. Layout adheres to a 2-column full-color standard and the pdf sports a GORGEOUS artwork of the class. The pdf has no bookmarks, which constitutes an unnecessary comfort detriment, particularly when combined with the fact that you can’t highlight or copy any text in the pdf.

Robert Gresham, Wojciech Gruchala and Angel “ARMR” Miranda’s vivisectionist is, let me state that clearly, a nice hybrid class. It has unique tricks, a distinct playing style, sufficient player-agenda, a concise identity and even some seriously inspiring discoveries. This class, in short, would receives 4 or 5 stars, easily. Unlike earlier hybrid classes by Wayward Rogues Publishing, it is one worth getting…if you’re willing to spend a little time to work on it. As written, there are a lot of formatting hiccups and some ambiguities within the framework of the class that drag it down a notch from the praise I’d otherwise bestow upon it. The fact that some core abilities require further clarification is a nasty strike against the pdf and while I still can endorse this to GMs willing to work with the crunch, the editing and formatting deficiencies leave me unfortunately no choice but to rate this down to 3.5 stars, missing the rounding up by a tiny margin. I do hope this’ll get a revision at some point – the cool ideas herein deserve the chance to properly shine.

You can get this promising class here on OBS!