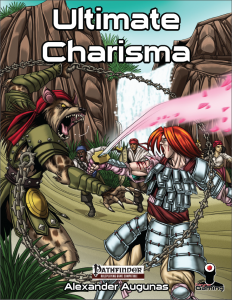 Ähem. GET THIS NOW!!!! No, seriously, get this NOW! ASAP! This book belongs into the library of every Pathfinder group. No exceptions. None.

Okay, you really want to read a gushing elaboration on how this book represents all that is awesome about 3pps? All right! A little history first: Alexander Augunas started Everyman Gaming to release a single, humble little pdf called “Psychological Combat.” The first iteration of this little book was good…and then, he made it better. What does Psychological Combat represent? Basically, the pdf constitutes the one “less than 5 bucks”-crunch book that tops my list whenever someone asks me which little pdf to get.

It’s, sans hyperbole, the most used little rules-book in my game. What does it do? Beyond brilliant archetypes that allow you to use performance combat in regular battles, psychological combat takes one of the most jarring rules-components and makes it significantly more elegant: Feint, Demoralize and Antagonize – what do they have in common? They behave pretty much like combat maneuvers without actually being combat maneuvers. They also sport different, somewhat inelegant rules. Well, know what? Alexander Augunas has streamlined them into a more maneuver-like system that imho should have been the default way PFRPG utilizes them – his system is, from a rules-aesthetic perspective, simply glorious – a thing of true beauty and the codification of antagonize as a generally available maneuver renders this book absolutely SUPERB. There is a reason this made my top ten list of 2014 – it fixes one of the most glaring rules-holes in PFRPG in an inspired way.

Now this alone would make this book downright superb – but how do you improve such a truly legendary little supplement? Well, you add in a book that is no less stellar: The Leadership Handbook. We all know Leadership, arguably the best feat in the game – and, as design-legend Ben McFarland has observed, Leadership constitutes a present for the GM: It denotes a thorough willingness to immerse your character deeper in the world of a given campaign…but it’s also EXTREMELY strong…to the point where my previous campaign had ALL PCs take Leadership. Alexander Augunas did something at once radical and visionary: He made Leadership, the best feat in the game, free for everyone. This sounds crazy, OP – let’s face it, downright insane.

Know what? In the hands of a lesser designer, it would have been just that. However, we’re talking about one of the best crunch-designers currently operating in the 3pp-circuit. The Leadership Handbook’s codification of leadership as a universally available feature turned out to be downright brilliant, particularly so since the book also provided perfect synergy with the kingdom building rules. Basically, you choose perks to modify the type of leadership and reputation you have – you can utilize these perks for improving your kingdom-building prowess, make your own organizations, improve your reputation…and more. “But what if I don’t want a cohort or leadership?” There are loner perks, which allow for easy stabilization…or being a friggin’ one-man army that can, in mass combat, actually destroy hostile armies. Come on, can you envision ANYTHING more awesome than a lone high-level dud walking calmly towards an incoming army…and then crushing it? Yes, these rules actually supplemented the material to do just that.

So that would be a basic amount of info regarding the absolutely superb basic frame this book was built on – but know what? It does NOT end here: This book sports ~ 1/3 of all new content: For one, there are significantly more perks to choose from, for both famous or infamous characters…and the concept of relationships is also explored, presented in a thoroughly concise and easy way that is ridiculously easy to grasp – we even get rules for dysfunctional relationships versus healthy relationships and the thus gained diversity is simply beautiful to behold…especially since all of this ties in perfectly with the aforementioned perk-system – a level of integration of holistic design that even extends to the traits covered in this book!

Speaking of holistic design: Know how sometimes new systems feel tacked on, how books like this tend to just complicate matters? Ultimate Charisma is pretty much the antithesis of such design: This book is so incredibly concise, so well-crafted, so inspired, it actually makes vanilla Pathfinder feel less refined in comparison – and I’m talking about all components, from Leadership to psychological combat to kingdom building…and yes, this plays imho perfectly with Legendary Games’ kingdom-building expansions. I could go on and list the respective components point by point, but ultimately, this would not make this review better – in fact, it would artificially disjoin what must be considered one of the most concise, holistic experiences I’ve EVER read for any iteration of a d20-based system.

Editing and formatting are stellar, I noticed no glitches. Layout adheres to a BEAUTIFUL two-column full-color standard that sports copious amounts of Jacob Blackmon’s gorgeous artwork, including ample new ones, big ones – this is a beautiful book indeed. The pdf comes fully bookmarked for your convenience. I bought the print as soon as it went online and its matte paper is nice – no complaints here, apart from the fact that I would have loved the spine to actually feature “Ultimate Charisma.” (Hej, it’s me – I *had* to complain about something, right? ;P)

Okay, in case this is not exceedingly clear by now: I consider this book to be a huge MILESTONE in design. To me, Alexander Augunas’ Ultimate Charisma represents all that is perfect and awesome about 3pp-material. There is literally no 3pp book apart from Raging Swan press Wilderness and Dungeon Dressing books that even comes close to seeing this much use at my table. There is no single session that goes by in which I do not whip out this book in one form or another. Ultimate Charisma is, no hyperbole, one of the most used books at my table – and its incredibly simple presentation that makes each and every rules herein simple and easy to grasp and does show the effortless-seeming design-mastery of Alexander Augunas.

Ultimate Charisma is a perfect representation of why I do this whole review thing: This book belongs into the library of every GM, no exceptions. It’s a brilliant expansion of rules; it streamlines some of the most jarring components of PFRPG into a significantly improved version that plays perfectly with established components. There is literally NOTHING I do not absolutely adore about this superb book – to the point where I actually changed my format away from the point-by-point analysis because it simply would not do this wonderful book justice.

The literally only reason this is not a prime candidate for my Top Ten of 2015’s number one spot is that 2/3rds of this book already received their accolades last year…but even if you do already own these, rest assured that Ultimate Charisma is worth every cent of the asking price. There are quite frankly almost no books that can compete with this stellar tome. Ultimate Charisma receives easy 5 stars + seal of approval and is to be henceforth considered an EZG-Essential, a book that each and every group should take a look at. This is one of the books that will be a benchmark for years to come for me – and designers: If you’re frustrated about complaints that something does not feel concise, holistic – take a look here: This is literally how it’s done. To the point where I really hope Paizo will take a look at the antagonize-etc.-rules here and consider them for future editions/unchained-type supplements. This component really ought to be core-canon…

You can get this milestone-level book here on OBS and here on d20pfsrd.com’s shop!