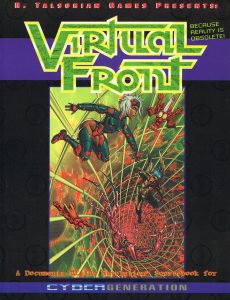 This review was commissioned by my patreons as a prioritized review.

Ah, the virtual world, as seen through the delightfully (at least from nowadays) retro-perspective of the 80s and early 90s, through the dystopian lens of Cybergeneration – we have an interesting sourcebook on our hands here, one that wastes no time and immediately situates us within the meta-narrative of the setting, explaining the legal situation and how the ISA have managed to basically abolish privacy…with the benefit of nowadays hindsight, the means by which this happened rings as delightfully top-down; as per the zeitgeist of the time of publication, it is obvious that a smart populace was considered to be the standard, not one that gleefully throws data out there…but I digress. If you need a good indicator of why I almost consider this cute, take the following sentence: “Even your cell phones are no longer considered private.” If you know anything about cell phone-location, how whatsapp etc. operate…then this will get a wry chuckle out of you.

While netspace may have sounded dystopian back then, the whole section on it and how Joe ISA uses virtual shopping and the Net almost rings cute today, with chat areas and flap rooms providing forums where a degree of free speech is still maintained. Considering the existence of the darknet, this, once again, presents a delightfully retro and…positive take on the net. On a rules-level, we have a nice sidebar called “The Online Generation”, which elaborates on things you can do on the web – and online encyclopedias and the like will bring quite probably a smile to the faces of most folks. Think, people – not too long ago, these types of things had to be EXPLAINED. General allowances of software and difficulties for such tasks are btw. included here.

There are aspects where the erstwhile conceptions of the future have yet to be surpassed by reality, though: The extremely immersive and potentially addictive V-sims and virtuality aspects of the sourcebook fall into this category and retain the “not yet fully realized”-status as per the writing of this review. That being said, considering that we already have people that played until they died, the potential warnings here do ring a bit like a dire prophecy for the shape of the things to come.

Really interesting from a contemporary status – the intersection of virtual reality and reality, virtual illusions and the like will sooner or later become relevant for us, as augmented reality and the like become less scifi-like during the game. The book does contain concise rules for virtual camouflage and using gaussian fields to hamper the effects of virtual reality on real life.

It is also interesting to note that the book makes certain that you’re aware that the Net, for most folks, is a fairy land of infinite options and convenience – while both ISA and yogangs etc. are keenly aware of its dangers – electronic barbed wire, AIM sysops, brainwashed CorpsSec-hacking kids and the like – the book paints a picture of the web as a zone of conflict that is globally relevant and actually less cold or covert than you’d think – after all, that is the consequence of the overlap of virtual reality and real life.

Of course, considering the extensive depictions of angles, threats, etc., it should also be noted that we require some resources to navigate the virtual space. Basic rules for establishing flap rooms (safe home-bases, basically) are included, but I frankly wished this section had allowed for a bit more base building – RAW, the rules provided here are pretty rudimentary. On the plus-side, from NetBoxes to unabridged corporate encyclopedias and databases, the pdf does highlight several important resources with varying degrees of risk attached to them. A summary of Eden Cabal personalities also is nice…and the book’s irreverent tone is glorious here. The chapter lists: “Netwatch. Just kidding.” and then elaborates why it’s a good idea to use them…

TSAIs (Transcendental Sentience AIs) are also elaborated, before a variety of different power players and net groups are depicted. Now, this is a “-Front”-book in the series and as such, it does also list the respective actions the yogangers may want to undertake, with sample allies and adversaries noted: T-squaring, Paranoia Painting, Leeching, Reality Checks…and after that, an extended Q&A-section, once again, a nice read, makes for a cool elaboration of how all of this works for the purpose of your characters – obviously, with a focus on wizards. D’uh. (And yep, sample familiars included for your convenience!)

With all of these aspects, you’ll realize that we also should gain some new V-tech and, indeed, including a two-page-spread window-dressing-style artwork showcasing items, the section provides several cool tools. The first new yogang presented within the tome would be the v-punks, whose yogang skill would be Private Idaho, which allows for the creation of things – from floor to creatures…which can be EXTREMELY potent in the hands of a creative player. The second new yogang would be the Networker, basically the information-gatherers and spies of the online-world, whose datahound yogang skill is all about extremely effective online research…and in contrast, while powerful, I do believe that some slightly more precise information on what exactly you can find out would have helped getting a clue on the general potency of the skill here…but that may just be me.

That section out of the way, we begin with the extensive section on GMing successfully adventures that feature a sufficient amount of virtual components – including electronic handwriting. Legendary Rache Bartmoss is also depicted here…as are his RABIDs…which have had a rather…ähem…let’s say, colorful background. Beyond that, Lt. Marcus Taylor, ISCTF field programmer complements this section.

And this is as far as I can go without diving into deep SPOILER territory – from here on out, we’ll look at the adventure herein, Operation Upgrade. Potential players should jump ahead to the conclusion.

Great! So, the adventure begins with the group’s wizard being contacted by a mysterious mental call, which proves to be an AI called Scoop (communicating in pseudo-binary – much to my chagrin, no correct correlation of letters here to the 1s and zeroes here)…and it soon becomes evident that the AIs are inhabiting a world of their own within the net…and the trail leads, via relatively creepy and urgent timeframes to an arcade (hopefully past some distraction) and meet up with a committee of AIs that tease about knowledge regarding the origins of the Carbon Plague…and they need the PCs – they want them to enter a facility of the ISA, where 601 awaits -an evolved AI that is scheduled for deletion within 24 hours. Double-checking the task of the AIs…well, doesn’t really yield helpful assistance, so it looks like the kids are on their own…or at least, they’ll have no cavalry.

However, this is where e.g. the networkers come in: Leg-work is smart and the pdf actually provides a full employee-roster for the complex, requisition forms and the like; pretty impressive attention to detail! From Vidiots (introduced in MediaFront, review forthcoming!) to V-punks, the other relevant gangs are also covered, but ultimately, time is not on the side of the characters – they have to infiltrate site 601: Getting past security can be accomplished with a variety of means, though it is pretty obvious, by which route the adventure assumes the PCs to enter is pretty evident. The facility itself is fully mapped, which is rather nice, but the maps do not sport a scale, which can render descriptions a bit more opaque than they should be. That being said, since the primary mans of infiltration assumes the use of cleaning drones as hide-away spots, it is interesting to note that the pdf specifies which drone cleans what area – once again, intriguing detail!

While the AI seems to be slightly creepy, ultimately the PCs should be able to get it outside…and as thanks, the AI installs a kind of program into their brains that allows for quasi-telepathic communication…and prevents them from leaving the immediate vicinity! It claims the carbon plague was generated via computers and has, at this point, basically enslaved the PCs! While scanners receive a new ability from this ordeal, the PCs are in a big bind – as 601 forces them, time and again, into dangerous situations, its evolved AI-human-interface making the AI prone to emotional outbursts mirroring the PCs…and its operation upgrade’s tasks are completed one by one…so in order to stop the AI, the yogangers will need help, smarts and some serious backbone…otherwise, the dread operations will complete…but if they do prevail, they’ll have made some seriously neat AI allies…just hope that 601’s done for good…

Editing and formatting are very good, I noticed no undue accumulation of glitches or the like, Layout adheres to the nice 2-column b/w-standard of the series and the book features quite a lot nice b/w-artworks. Cartography is functional, but the lack of scales on them may be considered to be annoying. We don’t get player-friendly maps, which is a bummer. The scan itself is generally nice, though the pages are slightly slanted. On a few pages in the upper right corner, the text could be a bit cleaner. Huge No-go: The pdf has no bookmarks, which constitutes a serious comfort-detriment.

Edward Bolme’s VirtualFront is per se an intriguing and well-wrought sourcebook, though one that has aged a bit in some aspects. That being said, the retro-charm fits Cybergeneration really well – we have a somewhat more naive and friendly conception of virtual reality, though one that is not bereft of knowledge of the more problematic aspects. The supplemental material is well-made and the setting-information’s prose is superb. The new gangs have very different power-levels and appeals, at least for me – the networkers just feel dry to me, more like an NPC-organization than a PC-option, but that may be me.

In contrast to EcoFront’s module, the adventure herein may lack the epic final scene and feel more mundane, but at the same time, it is, at least to me, the better of the two: It is a fun and evocative ride and one that emphasizes throughout its course the importance of engaging in roleplaying with the AI – this module can only be beaten by smarts and roleplaying…and I really enjoyed this aspect. The module features a great antagonist and has plenty of follow-up potential. All in all, I really enjoyed this sourcebook…though the lack of bookmarks for the electronic version really sucks – if you can, get print instead. In the end, my final verdict for the pdf, the only version I own, can only clock in at 4 stars – while a lot of this book’s content is still phenomenal, the aged components and the lack of bookmarks do not leave me the choice of rating this higher. Still, I’d love to see a new VirtualFront, updated and expanded!

You can get this book in print here!