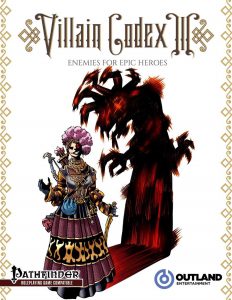 The third installment of the Villain Codices clocks in at 20 pages, 1 page front cover, 1 page editorial, 1 page SRD, leaving us with 17 pages of content, so let’s take a look!

This review was moved up in my reviewing-queue as a non-prioritized review at the request of my patreons.

All righty, so the respective villains all come with full stats,a brief history, a suggested plot (or more) and some goals the villain may have. The respective foes span a CR from 15 to 20. Each NPC gets a cool b/w-artwork.

All right, the first foe herein would be a former dwarven war-hero – Daegrim Siegebreaker, consumed by his hatred of orcs, the CR 15 foehammer fighter is looking for an artifact to eradicate everything with even a drop of orcish blood – the Greenbloodstone…and he may not share his genocidal intent with adventurers he hires to retrieve the artifact.

Also at CR 15, the pdf depicts The Final Star – an advanced lantern archon amnesiac psychic 12. The creature awoke with shattered memories of the end of all existence and a list of 1000 names– and is convinced that it has been sent back in time to stop the end of existence itself…sending out minions to strike the names from the list. This guy is amazing. It not only reminds me of my first published work (I did a similar angle, though inverted, in Coliseum Morpheuon), it also reminded me of one o my favorite Ayreon lines: “Send back visions of war and decay/paradigms of fear in a world of dismay/shape the present, alter the past/create a new future, one that will last/we can save this ill-fated race, who are lost in the ocean of space/find a way to prevent their decline/guide them back on the river of time.” So yes, beyond being a cool idea, this fellow resonates with me on a personal level. Huge kudos!

At CR 16, Kalina Marsh is a half-elven bard 9/master spy 8 – she is basically all about controlling the narrative, a propagandist and demagogue with a star-like reputation and serious combat capabilities to boot. Oh, and she may well start a war if you’re not careful…Surprisingly tough for her professions! Well done!

Ye Mi Goshi, at CR 16, is the yeti survivor of a planar congruence with the elemental plane of fire – witnessing the horrors and wonders of flame, the yeti has become infused with power – he is a potent pyrokineticist, obsessed with flame. Creative, cool and fun – kudos for the delightfully strange yeti!

Fyrek of the Bones clocks in at an impressive CR 17 – she is a Halfling iconoclast inquisitor, obsessed with death, bones…he’s pale. She’s also basically a fun riff on being a goth: She is obsessed with becoming a vampire and serves the undead as a willing champion/killer/executioner. She is ruthless, deadly and seeks to destroy the holy relics and champions that prevent “her” people from spreading across the land. Fyrek is a deadly adversary – and I generally enjoyed her as well – creepy Halfling is something not done too well that often.

Okay, now things become AMAZING. Know the old saying of “power behind the throne” – well, think what’d happen if that was wrong. Big time. CR 17’s second foe would be Throne. The throne. Who controls a whole nation. Throne is a mimic first, a mesmerist second and 100% amazing. I can’t believe I haven’t pulled this guy before. Two big thumbs up!! One of my favorite villains herein!

The villain depicted on the cover is up next – Adonia Grivas, a vampire unchained rogue: Once a master thief, the CR 18 lady is currently the king’s favored concubine, extending the power of her reach in the government’s highest circles.

At the same CR, there is Astralis, an advanced human skinshaper urushiol druid – she travels the world preaching peace and complacency – sounds nice, right? Well, unfortunately for all involved, she is the chosen of the mi-go, reconstructed from the ground up to be a superior lifeform and herald to their plan, preparing the world for harvesting…

The CR 19 vigilante Valene Azurian gets a really long and detailed story – the vigilante has had some sociopathic notions from the get-go, her royal parents sending her off to be raised by her grandmother only ended in enhancing her hatred for the monarchy – and so she presents a dazzling dilettante’s smile, while using her Halfling alter ego/identity to commit crimes that are aimed at changing the very notion of rulership.

Uldin the Gray also receives some advanced story etc. – the CR 19 half-orc bloodrager/dragon disciple. Uldin is actually the raging spirit of a vanquished dragon, reborn into the body of a half-orc. The dragon has since managed to infiltrate a group of dragon-slayers – he needs 33 body-parts from different dragons to regain his proper form…and woe to his “allies” and all that stand in the way of him reclaiming his dominion…

At CR 20, Thanadan was reared by a legendary general – who adopted the green dragon. The duo became legends…and while his rider was slain, the grief-stricken Thanadan is still a dragon…and a cavalier (*cough* AC 40…) and likes using lances…Ouch! Speaking of which: There would be one final foe herein.

Also at CR 20, we get Tyrin the Implacable. He is an awakened iron golem slayer (vanguard)…and he was forged in the battle god’s forges to rid the world of weakness – an implacable, huge force of destruction. Cities that face him and his host have 3 days – each day, the terms become worse, the price higher. Tyrin, in the meanwhile, sees himself as the savior of the mortal world, as he forges his empire in blood and steel…

Editing and formatting are top-notch, I noticed no serious glitches on a formal or rules-language level. Layout adheres to a printer-friendly two-column b/w-standard and the pdf sports a series of several pretty neat, original b/w-artworks. The pdf comes fully bookmarked for your convenience.

Complex, deadly and evocative, there are a lot of truly creative foes in this book. The villains offer a ton of cool ideas for the GM and many of the potent villains could carry whole adventure arcs, perhaps even campaigns. Stories and motivations are diverse, and from the weird to the more mundane, the villain cadre as a whole is varied and interesting. In short: This is an excellent NPC-collection, well worth 5 stars + seal of approval.