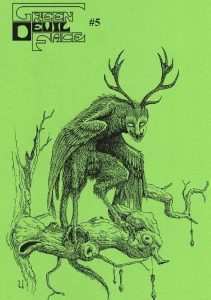 The fifth installment of Green Devil Face clocks in at 13 pages, 1 page front cover, leaving us with 12 pages of content, so let’s take a look! It should be noted that the layout of this pdf makes it possible to fit up to 4 pages on a sheet of paper, being generally intended for an A5/ 6” by 9”-standard.

We begin this pdf with “A Rather Unfair Trap” -a pool of water with a submerged cage containing a ruby. Touching the ruby switches places, potentially drowning the victim. Such a victim then slowly dissolves and the liquid changes the brain into a new ruby.

Next up are two d30-tables – one for effects of a natural 20 and one for effects of a natural 1. Some do feel a bit weird to me: Like the option for your allies to gain all your XP in that session – how is that in any way, shape or form related to fumbles? How does one 1 prevent the whole party from taking offensive actions? These, in short, are simply not good and feel random at best.

The next article depicts a new character advancement technique: 1d6 hit points, +1 attack bonus, +2 AC, 15 in all saves. Press attack nets +1 attack bonus -4 AC, while defensive attacks invert those modifications. On a level-up, you roll d10s twice. A player can alternatively roll one d12 – 11 and 12 net a total of 4 different bonus effects. These can, thus, generate ridiculously high defensive AC options for fighters who emphasize offense, a lack of new spell slots for casters, etc. – as a whole, I do not consider this method rewarding as presented. 8 tables are provided, in case you’re interested in the system.

Next up would be an alternate XP-progression: You roll 1d6 after an adventure and add/detract modifiers: If the roll exceeds the current level, the character gains a level. Being reduced to 0 hp, being a sole survivor and the like are positive modifiers, while a lack of PC deaths actually detracts 1 from the tally. lack of gained treasure and not having to roll a saving throw also are detrimental factors, with the latter basically actively penalizing smart players. Not a fan.

The next article is “What’s up with that Cult?” – a generator of various small tables to generate the basics for a cult. The generator isn’t bad, but painfully generic. One can do better with e.g. Raging Swan Press’ offerings or by hand-crafting one. Thankfully, the second generator for being stranded on a shore fares a bit better – while also generic, the respective entries come with more detail and features encounters, events, weather, messages in bottles, strangenesses and the like – I actually really liked this one.

12 different entries that explain the Loch Ness monster provide some nice ideas – giant zombie leech, for example. Just sayin’ And yep, this one is nice.

Editing and formatting are very good, I noticed no serious hiccups. layout adheres to a 1-column or 2-column standard, depending on the article, is b/w and pretty printer-friendly. The pdf lacks artworks and bookmarks, but at this price-point, that’s okay.

James Edward Raggi IV is a talented author and designer, but this one feels like the (bad) B-sides collection of his rules-design scrapbook: The alternate progression-mechanics and crit/fumble systems are just bad ideas that remove any cohesion from the game. I can’t see any value in them, apart from “It’s random and deadly, yo – and that’s totally OSR, right?” My own reply there would be “No”, but I bet someone out there will like this. Personally, I loathe how arbitrary they dish out benefits and penalties – they are great ways to simulate playing with a really sucky GM who tells you “You can’t act, dude – your wizard buddy rolled a 1!” So yeah, these components are pretty much the epitome of unfun for me. The wreckage generator, trap and Loch Ness table help remedying the file at least a bit, but, as a whole, this is the one Green Devil Face I’d strongly suggest skipping. Even at the low price-point, I don’t consider this worth getting. My final verdict will clock in at 2 stars.

You can get this e-zine here on OBS.