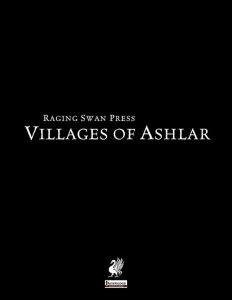 This massive compilation of the villages situated in the Duchy of Ashlar clocks in at 74 pages, 1 page front cover, 2 pages of advertisement, 1 page editorial, 1 page ToC, 1 page SRD, 1 page back cover, leaving us with 67 pages of content, so let’s take a look!

The Pathfinder version has btw. the most content of the three iterations: Two templates featured in the villages are provided, and with settlement modifiers (which can help GMs in other systems roughly determines characteristics at a glance) and the like, this is the version I’d recommend over the other two if you’re not playing in 5e; the 5e-version is the best choice for that version.

Editing and formatting are very good on a formal and rules-language level. Layout adheres to raging Swan Press’ two-column b/w-standard, and the book features plenty of nice b/w-artworks, quite a few of which I hadn’t seen before in the individual village backdrop installments. Additionally, the book comes in two iterations – one optimized for screen-use, and one made to be printed out. Huge kudos for Raging Swan Press doing that – this practice should be industry standard. The book comes fully bookmarked for your convenience. Cartography is excellent and b/w. I can’t comment on the virtues of the print version.

Creighton Broadhurst, John Bennett, Greg Marks and Marc Radle all are talented authors, and it shows – the villages herein have a great, subdued and palpably gritty feel to them, all without devolving into grimdark territory – this is a region suitably for dark fantasy, but you can just as well play a more heroic angle; the region is in need of heroes and it shows, but it does not devolve into a pit of misery. I love Ashlar as a region and very much enjoy the settlements therein; at the same time, this book misses the chance of tying the villages more strongly together, of making this feel more like a setting sourcebook than a compilation. That being said, on the plus-side, I did check for a couple of minor snafus, and this book has obviously seen a clean-up, so that’s a plus – that and the convenience. Now, personally, I’d love to see a big “Duchy of Ashlar”-hardcover, with travel distances, political angles, region-spanning events, encounters, etc., but for now, this makes for a handy tool to have. If you already have all the villages, you may want to skip this, though. As such, my final verdict will be 5 stars.

If you consider my reviews to be useful, please consider leaving a donation or joining my patreon. Every bit helps.