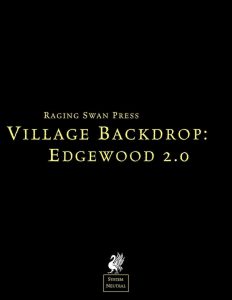 Edgewood can pretty much be a somewhat isolated town, though not excessively so; it lies at the edge of the Shadetimber woods, and it is subject to woes. Founded roughly a hundred years ago, it wasn’t affected by major upheavals since its founding, but in spite of this, the town hasn’t seen much population growth since the original 90 settlers. The settlement has the trademark level of detail of the series, sporting a market place, rumors, naming conventions for villagers and the like, etc. Available, I think, for the first time in a version more in line with old-school sensibilities, the marketplace section alongside the lore and rumor tables have been properly adjusted to focus on roleplaying. The items available reflect the decreased power-level, and class-references, where applicable, have been adjusted to represent the GOCs – the good ole’ classes. 😉

This is one damn glorious adventure – no, I’m not saying “backdrop” or “supplement” – I’m saying adventure. With 15 minutes of work, any referee worth their game can run this as a tantalizing module full of interesting characters. The return to Edgewood adds further fuel to an already excellent set-up.

If anything, version 2.0 has held up remarkably well; visiting this place once more made me realize that this still is one of the best entries in the entire series. And considering that this is the first system neutral/old-school-iteration of this settlement, I can only do one thing – tell you to get this ASAP! You will not regretting this little masterpiece of a village!! 5 stars +s eal of approval!

Please consider supporting my patreon here, or leaving a direct donation – it keeps the lights on.