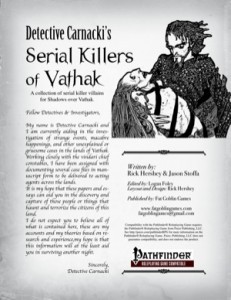 This pdf is 10 pages long, 1 page front cover/editorial, 1 page SRD, leaving us with 7 pages of content, so let’s take a look!

This pdf kicks off with a general introduction to the role  of serial killers and their psychology, before delving into the respective characters, so what exactly do we get?

Well, for example we get a maiden who cuts herself (which might be a little close to home for some) and seeks to fill the void inside her by slaying her lovers. Each of the entries comes with a history of the character, a description, a modus operandi and advice for the DM to handle the PCs investigating the respective serial killers.

There is also a man forced into incest with his sister by his ultra-conservative sect, first killing his family and after that, seeking solace in faith, slaying those he perceives as sinners according to the ultra-strict tenets ingrained into his traumatized psyche. We also get a true sociopath – one guy who kills for the sake of killing and nouveau frissants, seeking for ever new ways to slay, changing his modus operandi.

Less distinguished and smart would be a mad Bhriota necromancer who slays with magic – making, again, his modus operandi hard to analyze, though all in all being more straight and less sophisticated. We also get a watchman who turned to vigilant justice – seeking to properly punish criminals.

The final serial killer is GLORIOUS in his vileness- a serial rapist and killer once vanquished that could not have been stopped even by death and has since risen from the grave to revive his spree.

Editing and formatting are good, but not perfect – I noticed some minor issues here and there. Layout adheres to Fat Goblin Games’ 2-column b/w-standard and the artworks for the respective serial killers are nice, especially for the low price. The pdf has no bookmarks, which is a minor bummer.

The serial killers herein are twisted, deadly and hearken, for the first time in any Vathak-product I’ve read so far, back to Ravenloft’s glory – characters with depth that are believable, disturbing and neat. I did not enjoy that two of the 2 killers don’t have a distinct Modus Operandi – one fits, but the other is just a lame one that is the one blemish of the product. All in all, though, an excellent collection of truly twisted individuals to craft adventures around and intersperse through your campaign. Thus, I’d look forward to a sequel and remain with a final verdict of 4.5 stars, rounded up to 5 due to the low price.

Need some fiendish adversaries? Here you can get the pdf!