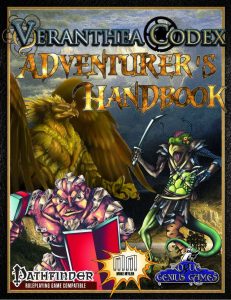 This massive compilation of player-centric material for Veranthea clocks in at 197 pages, 1 page front cover, 1 page editorial,1 page ToC, 1 page of SRD, 2 pages of advertisement, 1 page back cover, leaving us with 190 pages of content, so let’s take a look!

Okay, so we begin this book with a brief timeline and introduction to the setting of Veranthea and its distinct continents, with detailed (and really nice!) 1-page maps of the continents in question. The pdf explains the continents and leitmotifs in a concise and player-friendly manner, including the information on the Forever Dark, the collector cabal and a basic outline of the tesseract called the Veil – though here at least the main thing going on, metaplot-wise, is clearly spelled out for PCs, which is NOT something I would have wanted in a player-book. Pretty big SPOILERS there…

From here on, we revisit the various gods of Veranthea – you have at this moment seen those guys in the campaign setting, radical pantheon, etc., so I’m not going to reiterate the information once again. The section also contains various special materials for items, which can generally be called creative, though a few of them could use some minor finetuning – a material that absorbs energy, for example, and converts it to reflexive damage for the attacker, inflicts untyped damage that should probably be typed according to energy absorbed. Another material increases the damage output of weapons after being critically hit. Additionally, we can find dust that allows for the substitution of Strength as a spell’s governing attribute. It should btw. be noted that the occult rituals depicted in e.g. the Forever Dark book, have been included here. The gods come with obediences etc.

The pdf then goes on to recap the global rules Veranthea employs – the firearm recoil, the tweaks to psionics, the magic attunement rules, the rules for mirror weapons and fractal armor, the wild magic outcome-table, the rules for the scarring that defines the abilities of those born in Urethiel and the magic styles used there. Notes for playing monstrous parties, the Pilot skill, vehicles…you get the idea.

The player-section collates all the races of the setting, mentioning and explaining the distinction between people types, the divergent stats goblins and strix have in the setting and then going on to provide the racial stats of the Alterrans from “Into the Veil” (including all supplemental material like FCOs, equipment, etc.) and a stat-less mentioning of dread H’gal. Pantako, mongrelmen and leugho have been reproduced here with their associated material, while the previously only sketch-like feylves now get a proper racial presentation, with names, nomenclature, racial traits and associated material – they btw. get +4 Dex and +2 Int and Cha, -2 Str & Con, -4 Wis, making them pretty lopsided for certain builds. They are Small, have low-light vision, get +2 to CL-checks to overcome SR and +2 to Spellcraft to identify magic items as well as 1/day glitterdust and +2 to Perception. They also get quite a bunch of supplemental material, like new pieces of equipment and a racial archetype, the glitterbomber, who decreases bomb damage but blinds targets of direct bomb hits, with bombs that glitterdust foes and higher levels yielding immunity to being dazzled and several glitter-themed spells that they can cast by expending bomb-uses. They also inflict more damage versus targets subject to negative conditions associated with glitter-stuff: Blinded, dazzled or dazed characters, that is. Limited personal flight is locked beyond racial feats and enhancing drakones (animal companion and monster stats included!) they ride etc. make, as a whole, for a fabulous option.

The dengu and pengu variants of the tengu-race have been similarly expanded, though their racial trait modifications could have used highlighting – they are buried in a pretty long text at the beginning, but that remains an aesthetic formatting complaint. The half-doppelganger race is a but lopsided, gaining +4 to one attribute, -2 to another, darkvision, light blindness, immunity to the effects of the trekth’s architecture and free alter self with dynamic forms, which can be VERY potent in the hands of the right player. Flesh pockets, armor that is absorbed when changing forms and the like can be found as complimentary material here. A minor complaint: A feat that morphs your hand in a natural weapon of your choice does not take sizes into account and does not specify whether the weapon formed is primary or secondary – and considering the feat’s flexibility, there is no default to fall back on. This is a bit puzzling, considering a magic item that nets you bone claws gets the type classification right. The other options here, though, are pretty damn cool and include sound imitation and limited, food-powered fast healing that cannot be cheesed, though the Dexterity-check to negate AoOs when eating in combat can be considered to be a bit clunky.

The strange shokusei notoku halflings also get a proper, full depiction, at +2 Wis, -2 Str, Small size, low-light vision, keen senses DR 2/ slashing or bludgeoning as well as immunity to paralysis, poison, polymorph and sleep effects as well as stunning. They also get +8 to Stealth to hide in vegetation. All in all, pretty powerful. The god tear artifacts, their language, etc. are provided and the racial feats emphasize grappling via unarmed strikes, something that taps in their unarmed ranger archetype and its unique combat style options. They also get a variant, vine-based grappling hook, not unlike that used by the leugho, magic ropes and whips and the spells are interesting, allowing for the assuming of pod-forms, etc. The sun-gryphons have also been included. However, none of the races get an age, height and weight table, which is a bit sucky.

The pdf then reprints the conduit base class, first presented in Amora Game’s excellent Liber Influxus Communis, and the Betzekorps Attack on Titan-style PrC as well as the Dragonminded psionic PrC. Entr entrapper, green avenger and lycanthropic icon have been collected here. Similarly, the archetypes collected herein sport the academy trainee, the adversarial armorist, the bird rider, the conexcron investigator, the drunk brawler, the gobchopper skirmisher, the goblin pistolero, the iron fury, the merchanteer, the monstrous minstrel, the nightmare assassin, the nightmare prognosticator, the oni sworn, as well as qinggong ninja, scientific innovator, swarm minder, the tian-ti ang agent, wild mage and wild scholar. The nightmare assassin, just fyi, is a tweak of the blood candle mechanics of the gitwerc, using the candles fashioned from the dead to enhance death attacks.

Alchemist discoveries, general feats and tech like chain swords have been collected here as well, alongside tech items (Veranthea has its own tech-rules, btw.) and the stats of snow orms. The pdf also presents a selection of Veranthean traits and collects the spells associated with the various deities in one handy chapter. After the spells and sans header or the like, we immediately move on to a collection of magic items associated with the deities of the radical pantheon.

Editing and formatting are very good on a formal level – I noticed no significant accumulation of hiccups. On a formal level, the rules-language is concise, if not always perfect – it should, over all, not generate undue problems, though e.g. when I read something like “class bonus” or “reaction” to denote an action, I cringe a bit. Layout adheres to Veranthea’s busy 2-column/1-column standard, depending on the content on the page, and crams a ton of information on each page – this is a dense book. Artworks are a blend of full-color original pieces, stock-art, etc. – fans of Veranthea will be familiar with the pieces used. The pdf comes fully bookmarked with nested bookmarks for your convenience.

Mike Myler, with contributions from Michael Allen, Jacob Blackmon, Larry Dixon, Nicholas J. Giebel, Jeffrey Hersh, Luis Loza and Michael McCarthy, has collected a metric ton of player-material here, which is a good thing, as far as I’m concerned: I hate handing out campaign settings and all their juicy GM-specific secrets to players and this book helps in that regard, big time. At the same time, it represents a great way for those of you who are not interested in the setting and more intrigued by the crunch – while deeply situated in the context of the setting, this still represents a great way to get exactly that.

That being said, if you don’t want this as a player handout book or as a stand-alone, divorced from the setting, then this will do significantly less for you – for the most part, you will be familiar with the material herein if you own the other Veranthea books. To me, the book does represent a bit of a missed chance – hiccups in the original iterations of options are still herein, though e.g. the page-numbers are correct.

If you get this book for its own virtues, be aware that Veranthea is a pretty high-powered world and as such, this is not made for gritty games; there are a couple of options that are pretty potent, though still, as a whole, within the realms of the classic paradigms. As a whole, this is worth getting if you don’t have the other Veranthea material. From an organization-perspective, I think the special materials, mirrored weapons etc. should have all been collected in their own sub-chapter, mainly since looking for them in the deity write-ups can be somewhat hard to keep in mind. I also consider some notes presented here to be slightly SPOLER-y, with e.g. the nature of a certain god and the metaplot of the Veil being examples for information that should have been redacted. As such, this is not perfect, but neither is it anywhere close to mediocrity – my final verdict will hence clock in at 4 stars -a good offering and a nice way to get Veranthea’s crunchier bits to players.

You can get this massive array of player’s options here on OBS!