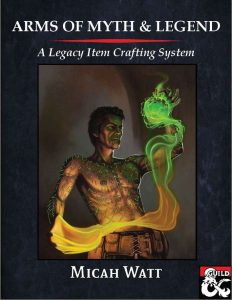 This pdf clocks in at 27 pages, 1 page front cover, 1 page editorial, leaving us with 25 pages of content, so let’s take a look, shall we?

All right, so crafting in 5e is rudimentary at best – considering the time it takes to craft mundane items and the fact that magic items require infinitely more time, the system puts magic item creation, even that born out of epic moments and spontaneous infusions of power, firmly out of the grasp of adventuring characters – a single legendary item would require the majority of a human’s life to fashion. This pdf is designed to allow the PCs to “make”, in a way, their own legendary item – a magic weapon/armor/etc. that may be improved over the course of the adventuring life.

The system remains pretty simple and elegant: 1st level (or whatever is deemed to be appropriate by the GM) provides the basic item, which is considered to be common regarding rarity. The rarity determines the maximum number of abilities available for the respective item, starting with 1 ability, and increasing the number by +1 ability for every item scarcity category upgrade. Items with charges may hold double that amount of abilities – may, mind you. So no, just because you have a sword that has charges does not mean you’ll drown in abilities. The item in question can be improved in this manner at 3rd, 6th, 11th, 17th and 20th level, with the capstone making it a legendary artifact. The items entail gaining features and a proper means of destruction, concisely defined here – and it should be noted that, no, the highest level results are not equal to the iconic artifacts.

Now, while a gold value that needs to be provided for the upgrade is given, it should be noted that the engine does not necessarily require the value to be paid for – instead, it actively encourages the GM and player to come up with means of paying for this increase – whether it’s acquiring e.g. adamantine, destroying evil items or the like – the value is a necessary guideline, yes, but not one that necessarily needs to be paid for in gold. There is another requirement for advancement, namely an increasing number of so-called pivotal moments that the item must be involved in. These provide a kind of GM control device as well as a means of determining the nature of the item involved. A blade used to slay fiends all the time will sooner or later thus gain thematically-fitting abilities. This would btw. be as good a place as any to note that the pdf sports a couple of minor, typo-level glitches: Missing full stops, blank spaces where none should be. While the exception, it should be noted that some of these could have been caught.

The system being relatively free-form, the book provides some much required guidelines for the GM. These would be as follows: Only one item per character; items must be fitting for the character; the item advanced in the way the character advances; item advancement is a collaboration of GM and player and it should be iconic, hard to lose and very hard to destroy. All sensible and pretty easy to maintain guidelines. Beyond this, an in-play example is provided and we move on to no less than 10 fully detailed such legacy items. Pivotal moments in the item’s history have been properly bolded in the respective write-ups and the abilities gained are organized by scarcity. The items run a rather diverse gamut, beginning with an enchanted alembic that has, at higher levels, a chance to properly identify the composition of compound liquids and retain remnants of potions consumed from it or at the highest levels, even generate random potions.

The pdf also contains the anvil of kings, which has a small change of infusing items with magic, nets Blacksmith’s Tool’s proficiency and the higher levels can allow for the addition of e.g. the properties of flametongue or adamantine properties…but here, we encounter a bit of an issue: The item seems to base its effects in a significant way on treating item enchantments as modular, which they not necessarily are – while it is easy for the GM to extract such properties, RAW, this is a bit wobbly, though the issue is, ultimately, a system-immanent one.

A black blade of razor-sharp glass that can generate temporary clones of itself, a crystal globe that shrouds the user in chaotic thoughts and that, alter can be inserted as a quasi-eye into the wielder, a buoyant staff aligned with the forces of frost and water. It should be noted that the amazing blade hellrazor, that ostensibly willed itself into existence, for example is very precise…but at the same time, some items do not precisely state the type of the bonus damage they inflict at higher levels; the type may be evident from context, but it represents a minor flaw worth mentioning. Similarly, e.g. the sanguine shield does not specify whether it’s a bonus action or action to activate its charge-based abilities -similarly, its recharge ability, being “fed” blood, is not really precise in how it works and left my puzzled. Silver sorrow, a blade entwined with the tale of a silver dragon, makes for a powerful tool for the causes of goodness, while the runehammer is a dwarven weapon with potent abilities pertaining dwarven scripture, the fight against the goblins, etc. The will of the one, finally, is a helm that was used breaking free from the control of the dreaded illithids – and while pretty potent, it makes sense…though the high-level duplicate generating option of the item lacks the necessary precision and left me with quite a lot of question marks regarding how it works.

Editing and formatting are uncharacteristically weak for a pdf penned by Micah Watt: From missed italicizations to punctuation hiccups to inconsistencies and issues in the interaction of more complex abilities, there are quite a lot of hiccups here. Layout adheres to the nice 2-column full-color standard used by Pyromaniac Pres books and each item gets an AMAZING full-color artwork – none of which I have seen before. In short: This is aesthetically-pleasing. The pdf comes fully bookmarked for your convenience.

Micah Watt’s system left me torn. On one hand, I really enjoyed the lore of pretty much all items herein. Similarly, I found myself enjoying many of the creative abilities. At the same time, the formal criteria and rules-design of the items does have a selection of issues that could have been caught by a capable editor.

The system presented for 5e-legacy/legendary items is really cool…but ultimately, it is only a sketchy “here are guidelines”-type of system. The pdf does not actually deliver on the promise of crafting legacy items.

I couldn’t help but feel that, having a selection of common, uncommon, rare, etc. abilities to provide a modular toolkit for the GM would have seriously improved the value of this pdf. As written, you can try to extrapolate from the example items presented, sure, but it still requires the GM to do the heavy lifting – more so than a modular ability-array would have provided.

Now, this is not a bad pdf, though it sports some serious formal hiccups and falls short of its lofty goal…but there is one more thing to bear in mind: This pdf is ridiculously cheap – it only costs a single buck and it is worth getting for that low price, no doubt about that. I’d be rather surprised if you got this and didn’t get something cool out of it – the prose for the items, for example, is rather intriguing and the base system is promising as well. Still, with the glitches, I can’t go higher than 3 stars, even taking the low price point into account.

You can get this pdf here on DM’s Guild!