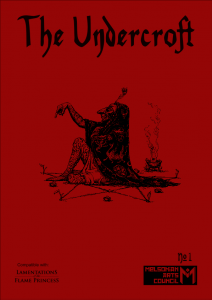 The first installment of this ‘zine clocks in at 26 pages, 1 page editorial/ToC, 1 page SRD, leaving us with 24 pages of content; the electronic version also includes a 4 page cover-file, which sports 1 page front and back cover and 2 pages of maps. I do own the physical copy of this ‘zine, and it is a surprisingly nice, saddle-stitched pamphlet (both electronic and print version are 6’’ by 9’’/A5), with red covers – stark, paper-quality wise nice, particularly considering the low asking price.

My review is thus primarily based on the print version, though I have taken the electronic version into account as well. It should also be noted that this is a LotFP-fanzine, employing the rules of the system, and, more importantly, as such it adheres to a dark/weird fantasy horror-aesthetic, recommended for mature folks. It’s not explicit in any way, but deals with dark themes.

After a brief introduction, we begin with the first article “Rewriting the Cure Disease Spell”, penned by Alex Clements. Okay, I usually try to go neutral review-robot, reserving my opinions to the sidelines and conclusion, but this, when I read it first, was an eye-opener of unrivaled proportions as far as what I expected from ‘zines and what I expect from them. Why? Because the article if pure frickin’ GENIUS. It is ridiculously simple, but it is something that has, at this point, found its way into all my games in one way or another. Yes, all of them. PFRPG, DCC, 5e, OSR-games – it doesn’t matter. I use this. Because it’s genius in its simplicity. The idea is as follows: A disease has an infection vector and a save (which is converted, should you need to, easily enough). Oh, and not all diseases are instantly cured. Syphilis suddenly makes sense in a world where clerical healing exists, for diseases can now have DHP – Disease Hit Points. These denote, in short, the number of times you need to cast the spell to cure it. In more complex games, you can tie this to At Higher Levels, caster levels etc. – or, well, not. There is a minor formatting snafu here, in that spell-references are capitalized, instead of italicized per the LotFP-standards. Similarly, multiple failed saves often come with progressively weirder effects – amazing.

Beyond the genius base system, we get proper, detailed stats for syphilis, Godrickson’s corruption (with its subtable of strange effects – and yes, you can lose your male genitalia, if any, to this horrid magical disease),the devil’s face tumor, sign of conduct with demons…and, obviously, the plague! Did I mention the glorious parasites or an elf-only curse that can render their magic volatile? Damn, I adore this section. This could carry a whole book, and all sample uses of the system are inspired. This one, alone, makes this a must-own.

Master of the Undercroft Daniel Sell does NOT fall behind this quality in the second section: “The Wager of Battle” is brilliant. In Yongardy, the law is followed and much beloved. Why? Because lawyers duke it out to settle disputes! The peculiarities of 6 different types of law are provided before we get a gigantic 3-page d30-table that lets you determine what a lawyer’s known for, a second section and a caveat. The table is one of the best examples of its kind. Estate lawyers (also known as doormen) battle with huge hammers and shields, while King’s law is enforced in plate and with great swords. I love this. It’s inspired.

Finally, the last section of the ‘zine depicts the “Barrow of the Old King”, which seems to be just a jolly old fetch-quest, to retrieve the ring of an obscure king who ostensibly slew giants. The pdf comes with 11 different random encounters, and the maps noted before, sport asterisks that, apart from referee-decision, are suggested to be when you roll the dice. The adventure is nominally recommended for all levels, but it should be noted that it is deadly and difficult. Players that don’t run may die horribly at low levels; personally, I consider this to be suitable, depending on player skill from levels 1 – 6. As a formal complaint, the monster formatting is somewhat inconsistent, with a few just getting HD-values, while others get hit point values. The adventure sports two levels with 29 keyed locales, spanning the barrow and some caves. Being an old-school module, this has no read-aloud text.

The following represents a brief discussion of the adventure and contains SPOILERS. Potential players should skip ahead to the conclusion.

All right, only referees around? Great! So, beyond the lavishly-detailed dressing provided for the locations, which is used in really cool ways (mummified-bear-drawn chariot with a trap-door!), we have salt mummies, and there is a chance that the mighty, eponymous king runs into the PCs. If he does, they better run. At 8 HD, he’ll wreck them. Oddly, pantomiming gold-plated skeletons, Dark Souls II-style tripled zombies, sewn together, visions of the dying king…and yes, dumb PCs drinking metal can die in a nice example of a deserved save-or-die. Blasting crystals, risk/reward for greedy tomb robbers…this makes sense and is fair in its difficulty. There also is a unique, magical mace that gains strange effects when doubles are rolled damage-wise: Each of these are weird and come with their own lines of evocative prose that reminded me of the doom-ladden proclamations in e.g. Bloodborne: “And his heart sang of the deep.” is noted before the effects of one of these, for example. It’s a small thing, but it adds to the overall atmosphere of the complex…and there would be corpse lions, disgusting, deadly insects that make up the weird critters that have entered the complex, getting an intriguing write-up, having nasty gummy resin goo, smells noted and reaction/morale modifications. Size notes “A large dog” here, speed “as fast as a house cat while running” – precise values would have been preferred here. Other than that, this surprised me once more. The set-up is so basic and per se tired, but the creative ideas, detailed dressing and creative ideas elevate the module beyond almost every other module I have seen in a ‘zine. This surpasses many stand-alone adventures.

Editing and formatting on a formal and rules-language level are good – there are a couple of utterly unnecessary deviation from established LotFP-formatting and rules-presentation conventions, which somewhat annoyed me. Layout adheres to a printer-friendly 1-column b/w-standard, with artwork chosen from public domain in an atmospheric manner. Cartography is b/w and nice, but lacks player-friendly versions. The electronic version lacks bookmarks, which constitutes an unnecessary comfort detriment.

Daniel Sell and Alex Clements provide a first ‘zine that is remarkable in a ton of ways. The supplement is absolutely inspired, with all articles being excellent. Not a single one is boring or even mediocre. They all are excellent. Presentation-wise, this isn’t as elegant or gorgeous, but if you value substance, quality-prose and ideas over style, then you can’t do better than to check this out. The low asking price makes this a steal in my book. Now, I do have to complain about the minor formatting snafus and the lack of player-friendly maps, but considering that this is a freshman offering, my final verdict will clock in at 4.5 stars, rounded up for the purpose of this platform, and this also deserves my seal of approval. Excellent indeed!

You can find the print version here!