Trail of the Apprentice IV: The Oracle’s Test

Trail of the Apprentice IV: The Oracle’s Test 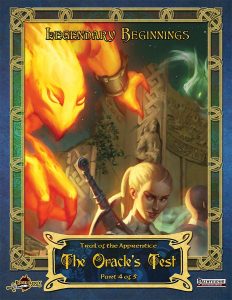 The fourth installment of the Trail of the Apprentice-series, designed to teach RPGs to both players and GMs alike, clocks in at 52 pages, 1 page front cover, 1 page inside of front cover, 1 page editorial, 1 page SRD, 1 page ToC, 2 pages of introduction, 1 page inside of back cover, 1 page back cover, leaving us with 43 pages of content. The pdf also comes with an art and map folio that clocks in at 27 pages (if you take front cover and editorial away), presenting the art as hand-outs as well as versions of the maps with and without grids, player-friendly and key-less – kudos for that! Seriously, as far as custom map-options goes, this should be industry standard.

Now, as always, the Trail of the Apprentice is designed to be relatively family-friendly and should result in no issues for kids ages 8+, unless you have particularly sensitive kids. This is very much kid-friendly, though, as always, I’d strongly suggest parents using this saga to reward non-lethal conflict-resolution, something the whole AP, alas, does not do, which represents, as a whole, the one glaring oversight it has.

All right, this is about as far as I can go without going into SPOILER-territory. This being an adventure-review, potential players should skip ahead to the conclusion.

All right, only GMs around? Great! If you’re reading the PFRPG-version – don’t be confused by the copy-pasta mention of 5e in the intro: You’re reading the right version of the module! We find our heroes again in the little community of Riverside, where they are scheduled to meet with a local sage called Hector Amaku, who knows more about the massive Ithmar forest, and specifically, the ruins of Sol’Ithmanna inside this vast expanse. Why? Well, the PCs may have ended adventure #3 with the name of their mysterious adversary, but between modules, no amount of scrying or information gathering has yielded any results…which represents a bit of a missed chance. Slowly unearthing this and the trail towards Riverside would have made for a great experience at this point and helped the GM learn the ropes of a slightly more modular investigation, while also introducing the means of information gathering beyond the basic “walk the quarters” highlighted in adventure #2.

In the tavern where the PCs meet the sage, they may run afoul of a werewolf thief, whose relations may or may not seek retribution later. Anyways, the sage points the PCs towards the ruins and tells them about the legendary oracle there – to gain access to Sol’Ithmanna’s ancient oracle, the PCs will have to collect an array of seals within the ruins of this once-great civilization and prove themselves worthy of the values they represent. That information under their belt, the PCs are off into the forest…which represents a step back when compared to module #3: Instead of providing a hex-crawl or similar player-agenda-driven adventuring experience, the trek turns out to be pretty linear, with several combat-encounters along the way, none of which are particularly hard.

Once the PCs arrive at the ruins, they can visit the different, fully mapped sections of the ruins – but it should be noted that the totality of the ruins does not feature a map, so connections between the hot-spot areas feel a bit opaque. Unfortunately, not the only section of the module that remains a bit opaque. While the ruins do feature random encounters, the main task for the GM-learning experience here would be handling pretty much the most challenging thing a GM can attempt regarding combats: There is the Dark Hand, an evil adventuring group who also seeks to get the seals and thwart the PCs. Considering that so far, the GM did not have to manage more than 2 moderately complex statblocks at the most, this feels a bit like jumping in the deep end, more so considering that the combat(s) with these guys will test PCs harder than any others in the series. Spoiler-alert: This is the most difficult-to-run section in the whole series, not something in module #5.

It’s also tooth-less in the extreme: The Dark hand does not kill the PCs if they down them. Groups are different, sure, but considering that the PCs should be the “good” guys and have happily been killing everything (ostensibly, including potentially these rival adventurers!), this show of mercy is transparent as GM-fiat to even novices of RPGs…and undermines, if you so far have stuck to just handwaving the PCs killing other critters and NPCs, the PC’s identity as heroes. Not cool.

More aggravating, at least for me, is the fact that the respective areas for the seals universally fail to mention the *precise* location of the seals…you basically have to improvise their exact placing after the mandatory combat encounter, which gives the whole section a bit of a haphazard look…something underlined by e.g. a fire elemental sporting the treasure entry of boggards which had to be defeated before that.

The leitmotifs of the virtues are also…well…not that concise here: The seal of compassion can be found in a place scouted by aforementioned boggards as a potential breeding pool…for which they’ll die if they try to keep the PCs away. That…kinda made me cringe from a meta-perspective and the values of the ancient civilization *do* become relevant. Besting the rival adventurers, the PCs gain access to the oracle’s domain, where they will pass a nice iteration of the trope of the hero’s test and after the extremely disappointing trek through forest and ruins, this is thankfully a return to form.

We have a 5-room dungeon here, with every room representing a test of one classic virtue held dear by the vanquished civilization: These range from the classic “one lies, one tells the truth”-puzzles to a mix of real and imagined undead or letting loot lie – and after that, the PCs can finally meet Revien, the faerie seer, bound to forever guard this place. From this wise being, they can gain information – the more tests they have completed, the more clues the PCs will receive: At the very least, they’ll now know that Belazeel tries to use the serpents to open a magical prison called “Basilisk’s Shroud” to free an ancient sorceress in hopes of learning her powerful magic. Further warnings and details of the dangers ahead may give the PCs an edge in module #5…but that will have to wait for next time.

Editing and formatting are not as precise as I’ve come to expect from Legendary Games. There area couple of unpleasant hiccups. Layout adheres to a nice two-column full-color standard and the pdf comes fully bookmarked for your convenience. Cartography is decent and in full-color, with the art-map-book as a nice touch.

Paris Crenshaw’s fourth installment in the series feels rushed in more than one way. After the excellent and evocative #3, this is linear, dry and bland in the beginning, missing out on some nice ways of teaching magical and mundane means of investigation in favor of captain exposition. The ruins, alas, similarly feel rushed – like each section was intended to be more detailed (at least to the point where quest-item-locations were marked…) and feels like it misses its GM-teaching aspect…unless that aspect was supposed to be “fix stuff a module didn’t properly spell out.” The saving grace of this installment is the hero’s test dungeon. It may not be new or exciting for any veteran, but for novices, it is AMAZING. In fact, it is my suspicion that each test should just have been aligned with a location in the ruins….perhaps that was the case once (comparing the relatively weak map of the seer’s domain with the intricate maps of the ruins, that sounds plausible to me…).

After the issues in internal logic with the rival adventurers and the weak hack-fest of the journey and ruins, the oracle’s test-dungeon is a breath of fresh air that salvages this module at least partially. This does not change that this represents, by far, the weakest part of the whole series so far. Veterans will get nothing out of this and novice GMs may end up frustrated and flustered by the whole ruin section…to the point where , were it not for the test-dungeon, I’d tell you to skip this. The dungeon is worth getting for the classic hero’s test experience for new gamers. Experienced groups should replace this module with another and experienced GMs running this for kids should consider seriously tweaking it to make it more compelling and diverse. My final verdict will clock in at 2.5 stars, rounded up, if only barely and due to the presence of the iconic hero’s test.

While my review is based on the PFRPG-version, the 5e-version can be found here!

Want it for 5e instead? You can find that version here!