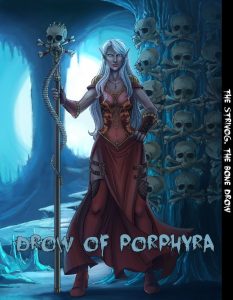 This installment of the series depicting the diverse drow cultures of the patchwork planet Porphyra clocks in at 31 pages, 1 page front cover, 1 page editorial, 1 page SRD, leaving us with a massive 28 pages of content, so let’s take a look!

One note first: This depicts a capital letters EVIL drow culture and as such contains some mature themes (hence no PFRPG-logo) – it’s not grimdark and won’t shock kids in their puberty, but sensitive small kids shouldn’t read this. If you need guidance: If your kids love Conan or enjoy reading darker stuff, they’ll be fine.

On a far-off planet, at one point, the elves were exiled from the light for offending the gods, becoming that world’s wintery bogeymen, one and all, only allowed to roam when warmth and light receded. Cold as ice, haggard and drawn, they ravaged and slew…only to be drawn, inevitably, back into the cold confines of the underworld. Thus they languished and anxiously watched the calender, awaiting entropy and the ever-advancing assault of winter whittle away the days of summer, year by year – until they were finally free…or so they believed. It is in these days of gods that had abandoned their world that they encountered a deity of death – and it is the horror-fraught exile through this deity’s land that forever transformed the strivog, in both mind and body, with the food of the dead, the acts of despicable cannibalism and worse demanding their toll, converting them to the worship of the dread entity…but also granting them strength, purpose and organization.

Thus they arose from the Icekrypt, a magically frozen wasteland of ice…and it is from these cold regions that they set forth, established their guilds and followed the deadly commands of their Lich Queen. Their culture is slow and deliberate, like the eternal ice and the patience of the dead; there is not much place for warmth in the hearts of the strivog and their brush with death left them even less fertile, which may be the once chance other races have. Ruthlessly meritocratic, their guilds and reputations and ranks are further extolled, painting a vivid picture of deadly culture, organized and structured and as inevitable and deliberate as the eternal ice, enslaving and generating vassal-dependencies, calling to the service of the dread Dark Maw.

The laws of the dead have been applied with grisly potency to the culture and the disturbing drow worship their deity via the grand edifices of sinew and bone these chillingly (haha) civilized drow craft in their calculated, merciless savagery, creating an overall highly-structured empire of ice and bone that manages to convey a concise and sensible picture of an evil empire.

Racial trait-wise, the strivog receive +2 to Dex and Int, -2 Cha, drow immunities, carrion sense, darkvision, resistance 5 to cold, +1 to the DC of necromancy spells (and, if the Wis is higher than 11, 1/day chill touch, command undead, touch of fatigue) , +2 when interacting with undead (should specify precisely the skills to which it applies, though it’s clear that they should apply to the social skills) and undead made by them gain +2 turn resistance! OUCH! They gain 6 + class level SR (should be character level) and suffer a -4 penalty to saves versus hot climates, -2 to saves to resist fire spells and effects.

Now here is an interesting take on alternate racial traits: Flavor-wise, the strivog share traits with the undead/ half-undead, but to maintain balance, they do not gain these traits, instead allowing them to choose their progression and specializations via alternate racial traits in an interesting manner: For the price of a feat or a number of skill points defined by the respective trait, the strivog can learn it, with character level +5 acting as a scaling cap that prevents low-level super-strivog. Intriguing: The more of these admittedly powerful tricks (like skeletal DR 5/bludgeoning) the strivog accumulates, the more drawbacks associated with the dead they also have to take. These tricks include powerful, 1/day abilities like howling agony as an SP or a fear-based paralyzing gaze that is saved from being insanely OP by the hex-caveat and the 1-round duration. Still, the options presented here are more in line for campaigns using pretty powerful PC-races…but as far as NPCs are concerned, I have no such scruples…and the drawbacks are brutal.

Favored class options for core classes plus inqui and alchemist are provided. Strivog, being orderly and organized, belong to a guild and an order, and thus, we get faction traits galore, including an anti-version of stabilizing touch, 1/day skill rerolls. As a minor complaint, the bonus types here are not properly codified. The pdf also provides rules for making e.g. swords of sinews and bone (with the disturbing promise that they can do that while the victim still lives…). If you’re btw. using the missing body parts/prosthetics-rules from Strategists and Tacticians, well, then you’re in luck, for the engine for fetish and totem creation is compatible with these.

These fetishes and totems steal abilities and allow the user to hijack them: While based on Spellcraft, at least partially, their wide-open and modular creation actually manages to prevent cheesing via spells or items, which is very impressive. In fact…the whole process of the creation of these represents a truly impressive feat of crunchy craftsmanship: From activation to what can be done with them, this engine alone should make this pdf worthwhile for GMs…or those looking for some particularly grisly trophy-maker…and before you gas and scream OP – there is a steep cost for the like, namely XP, which is generally not done in PFRPG…but considering the power these offer, I very much support this decision here. Several saple fetishes are provided, from assassin vine sashes to the lucky halfling’s foot.

From bone bags to funerary rites to 10 spells, we can see quite a few nice ones here – some of which are classics that made me smile for their inclusion here: Raise City. Just sayin’ The pdf concludes with a brief fluff-only overview of the main settlements of the strivog empire and some adventure hooks.

The pdf also comes with a bonus-pdf, the 2 page (1 page monster, 1 page SRD) depicting the CR 2 sunbat that hibernates at night and has a spear-like beak – nice!

Editing and formatting are very good on a formal level, but on a rules-language level , the pdf could be tighter. Some bonus types, some verbiages that are precise, but deviate from the standard, some minor hiccups. Layout adheres to the 2-column standard of the series and the pdf has some seriously nice full-color artworks. The pdf comes fully bookmarked for your convenience.

Patricia Willenborg’s series of drow-cultures, intended for mature audiences, is absolutely amazing. While I’d be hesitant to allow all options in non-high-powered games for players, so far each of the pdfs has managed to provide a truly evocative, unique vision of drow that sets them apart, big time, from the boring old spider-worshiping cliché. While they tend to have, on the crunch-side, some editing hiccups and minor issues, they more than make up for that by their engines: Whether it’s the drug-generator, the poison-customizer or this one’s fetish-generator, they provide easy and amazing customization options for GMs.

Beyond that, they just are a great read. The prose is captivating and compelling, painting a vivid and compelling picture. I am not engaging in hyperbole when I’m saying that I was completely burned out on drow culture-sourcebooks before this series came along. The strivog, now, are part of that great tradition that makes me really want to integrate them in my campaigns. The attention to detail and consistency of the culture depicted is amazing, captivating and ignites that spark of creativity within me. In short: I love this pdf; it is well worth the low and more than fair asking price. 5 stars + seal of approval.

You can get this amazing, captivating pdf here on OBS!