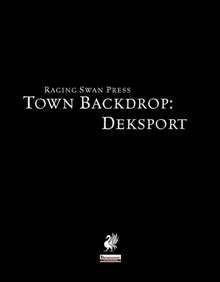 This pdf clocks in at a massive 37 pages, 1 page front cover, 1 page advertisement, 1 page editorial, 1 page ToC, 1 page statblocks by CR-index, 1 page advice on how to read statblocks, 1 page SRD, 1 page back cover, leaving us with 30 pages of content, so let’s take a look!

So, the pirate town of Deksport…wait, keep reading. No, this is no yet another (semi-)tropical pirate town à la Freeport or Port Shaw. Keep reading. So, Deksport is an isolated place – separated (hidden, one might even say) from the curious eyes of authority by the forest of grey spires, the place’s immediate environments are not only lavishly detailed, they also sport 4 villages (I smell village backdrops!) and what amounts to the first hints of a mini-setting akin to the lonely coast – the peninsula depicted in lavish cartography would definitely warrant such a treatment, especially since I would enjoy handy travel/weather tables for the area in a potential future supplement.

Now, if you’ve read my review of the last Town Backdrop, you’ll notice that this time around, the town with its statblock, lore, locations etc. once again swims in details – while we receive slightly less notable locations, we do get more notable people. A total of 50 whispers and rumors (which are evocative) provide ample curious threads to weave or ignore, but especially history and the demographics should prove interesting – Deksport has a significant green-skin population and as such, racial tensions and potential grudges can easily be developed into tighter hooks, should one choose to do so.

Deksport itself sport a sheltered bay protected by an old breakwater, docks and is a walled community, though one less structured and less crammed than Wolverton. The town sports a little trickle of a river and has forests nearby, as well as an elevated, fortified palace from which the “ruler” exerts his control – or rather, lack thereof, for essentially 3 individuals vie for control over the town.

A total of 50 entries in a table of sights and sounds help you drive home the uniqueness of Deksport. Unless I have miscounted, a table of 43 entries provides further events to act as inspiration for DMs to develop into hooks or full-blown adventures. In contrast to Wolverton, you’ll realize a rather specific distinction – unlike in Wolverton, you receive significantly less little hook-boxes with fully developed adventure hooks. HOWEVER, the level of detail provided for Deksport may still actually surpass that of Wolverton thanks to tables to generate tenements (intact and ruined), stores, vendors, tavern and inns (at one glance – quality, room available – very handy!) and there’s another new feature: From the Spire of the Beacon Eternal, a combined beacon/temple on a small island, reachable primarily via the encrusted Breakwater dam, to the docks, the respective environments sport handy DCs to use in conjunction with skills.

Speaking of docks – a handy table of ships and ship names, captains and where the individual entries can be found in the book help you make the most out of this particular section. Also interesting – brief summaries of relevant NPCs can be found in the respective entries alongside e.g. food and drink prices, prices for renting or buying slaves or what about the dread prison, the Wailing Tower, which houses captives that come with full information on the ransom required to take them out there.

The level of detail extends to the copious sample characters – sample personas are provided for the generic statblocks (for e.g. goblin pirates), while the respective named NPCs receive the level of detailed treatment scarcely seen for NPCs. In fact, even for Raging Swan Press’ standards, the attention to detail with which these people are depicted, makes for a fun supplement. It should also be noted that multiclassed and archetype’d NPCs constitute the rule rather than the exception here – heck, there even is a greater barghest with class levels here, though I will not reveal the identity of the beast!

Against a backdrop of mutual distrust and jockeying to become the sole ruler, the 3 rulers of the place are walking a tight rope – as might be the whole town…after all, racial tensions may flare up any minute and the swashbuckling villains generally tend to have not that much scruples when dealing with foes…

Editing and formatting are top-notch, I did not notice any significant glitches. Layout adheres to raging Swan Press’ b/w-two-column standard, is printer-friendly and generally nice to look at. The artworks range from thematically fitting stock art to pieces I haven’t seen before and the cartography is awesome – the town makes sense and looks rather neat. The pdf comes in two versions, one optimized for screen-use, one to be printed out, and both come excessively bookmarked.

I can’t comment on the dead tree version, since I don’t have it.

When I opened this pdf, I was disappointed – “Not yet another pirate town!”, I groaned. Well, I shouldn’t have drawn hasty conclusions. While I probably am a bit burned out on pirate towns and cities, Deksport still managed to capture my interest – thanks to the unusual, non-Caribbean setting, the racial tensions and adventure potential evident on every page and most of all – the attention to detail. The vast array of small tidbits and simply comfortable helpers for the DM, the gloriously concise layout that makes looking up a given piece of information ridiculously easy.

To state the obvious here – this is one of the most user-friendly books I’ve ever read. I had simply NO issue running this town right from the pages. The place is great, full of details and Raging Swan Press’ mastermind Creighton Broadhurst once again proves why he has his stellar reputation – this book managed to captivate me, in spite of me being rather burned out on pirate’s nests. Deksport is distinct and walks the line between modularity and uniqueness – can you scavenge this pdf for any other pirate town? Heck yes, you can. But in my opinion, you’d lose out on a pirate town that is distinct, has plenty of reasons to visit (and not to torch), even for good characters. Finally, the copious statblocks and tables can be considered extremely useful even if you’re not interested at all in the town.

So what will be my final rating? I tried, honestly and rather hard, to find something I could properly complain about, but found nothing – I tried not to like this book due to my personal pirate-town oversaturation, and I still consider it great. There are not many books that managed to accomplish this feat and hence, my final verdict will clock in at 5 stars + seal of approval.