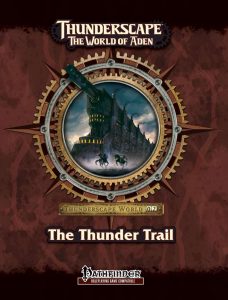 This Thunderscape supplement clocks in at 16 pages, 1 page front cover, 1 page back cover, 1 page editorial/ToC, 1 page SRd, leaving us with 12 pages of content, so let’s take a look!

We begin this supplement with 2.5 pages of well-written prose – Part 1 of “The Survivor”, to be precise; the narrative is nice. After this, we begin with the main meat here – a look at arguably the most advanced piece of tech in all of Aden, the massive dreadnought-style railways. Prior to the Darkfall, regular trains were employed in Columbey and the Concordance of Le’Ciel (As an unrelated aside: Pretty sure some Final Fantasy 13 designers were covert Thunderscape fans…), but the cataclysm made use of those pretty much a death sentence, and since they required serious resources to run, did not spread through all the lands. It was in Columbey that the first Thunder Train was unveiled, just 2 years after the Darkfall…and the rest is history. A history of pain and intrigue, but history nonetheless.

The eponymous Thunder Trail is the most important trade route in all the known lands, the primary means of restoring trade and commerce in a post-Darkfall age, and connects Mekanus all the way to Bulgrak – we are walked through the route ( a map would have been nice), and after establishing importance and course of these trains, we get information on, you know, actually riding them, with costs noted, and passage from Mekanus to various destinations noted, alongside with travel time, distance covered and costs.

And here, I’d like to extend a heartfelt THANK YOU to the authors. Why? We get distances covered not just in miles, but also in km. THANK YOU. Travel speeds are also noted, and guess what? We also get the km/h values, not just mp/h. I love that this helps poor ole’ Europeans like yours truly and other people not used to imperial measurements get into this and develop a relevant/sensible idea of the speed and capabilities of these trains.

Now, not everybody can afford the Thunder Trains. Traveling before them is plain suicidal, and next to them? Problematic for safety reasons. But behind them? In the wake of it and the mighty Iron Guard clearing passage? That’s grudgingly tolerated. As such, we have a kind of cross between externalized hobo- and budget-traveling culture, the remoras, who cling to the ephemeral wake of safety generated by these colossi.

After establishing the general functionality of these trains, we proceed to talk about the 4 iron giants – the Thunder Trains: The Dominant, the Pride of Mekanus, The Boundless, and The Scourging Eye. The Dominant gets a stunning 1-page full-color artwork, btw. The trains also note their length, the number of barges they feature, and the armament. Cargo barges are notes as well. Really awesome: Beyond the usual ballista and storm cannons covered here, we actually get two unique weapons: The Scourging Eye has a potent arcane matrix that can unleash stormbolts with a range of 1000 feet; the Dominant sports The Great Storm – probably the largest cannon in existence. These super-weapons, thankfully, are incalculably expensive – for once I applaud not including a cost here.

Beyond the Iron Guard, the Thunder Trains have another potent defense – the Sentinels, hidden in the machinery, capable of seamlessly emerging from it. These constructs clock in at a mighty CR 15. Not only are they immune to magic, they can fire multiple stun rays per round (as one standard action!), are masters of wielding steamreaver weaponry, and are bound to an engine of the train, gaining an excellent awareness of the train. Of course, as noted, they can camouflage and repair themselves. They are a cool build, though I did notice some minor aesthetic blemishes, like a capital letter X for critical multipliers. Nothing serious/too jarring, though. Yep, they are pretty much terminators. Of course, one of the discussed adventure hooks pertains rogue sentinels…

The pdf then proceeds to briefly touch upon the Urbana’s Annihilators and the airships of Yzeem and Arasteen, but doesn’t go into much detail there.

Editing and formatting are good on a formal and rules-language level.- Layout adheres to Thunderscape’s two-column full-color standard, and the full-color artworks for trains and sentinels? AWESOME. Less awesome: The pdf has no bookmarks, which makes navigation a bit of a pain – not cool.

Shawn Carman & Rich Wulf deliver one awesome little supplement here; if you enjoy the lore of Aden as much as I do, you’ll be excited to learn about the Thunder Trains indeed!

I like many decisions taken here; for example, not statting these behemoths, and focusing only on the weaponry, where it is relevant. The stats would inadvertently make them something that’ll be destroyed, and for the purpose of most games, they’d be akin to deities of steel. From the inclusion of metric values to the lore, this is a very nice supplement.

And that’s a big “but” – beyond general lore, the book doesn’t really help me PLAY on the Thunder Trains. We waste 2.5 pages on a short story-chapter; 1 full page admittedly awesome artwork, and the final page doesn’t have much to do with the trains either. In an ideal world, I’d have kept the artwork, cut the short story and final page…and instead provided MAPS. Schematics. ANYTHING that lets me picture how these colossi actually work, their layout, their interior/exterior.

I have no idea how a thunder train’s cabins and barges look like. How many may be seated. Where the engine is in relation to the rest. I have no idea how they work, and consequently, no idea how to actually USE them in game, save as an admittedly awesome backdrop. This is GENUINELY heartbreaking for me. I seriously, seriously, mean it.

When I first finished reading this, I was blown away, excited, wanted to use the Thunder Trains…and then I realized that I can’t. Because this doesn’t give me the tools to do so. The lore is fantastic. I mean it. I love it. But it ultimately only creates a backdrop, not an environment you can actually PLAY in. This pdf lets you make the Thunder Train cutscene of traveling from Point A to B more awesome, but it doesn’t really help you use it as a location in and of itself.

If you’re just in it for the lore, get this right now. You’ll love it. If you want an environment to play in, though, if you want to write an adventure in a Thunder Train? Then this will leave you sorely disappointed. My final verdict can’t exceed 3 stars.

You can get this lore-centric pdf here on OBS!