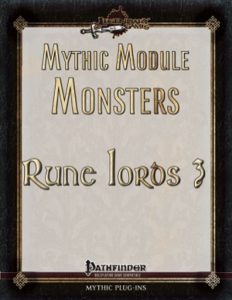 This inexpensive little pdf clocks in at 10 pages, 1 page front cover, 1 page editorial, 1 page SRD, leaving us with 7 pages of content, so let’s take a look!

What exactly is in here? Well, know how the AP-installment have a couple of monsters in the back? This book converts the beasts in back of the 3rd book of the by now legendary first Pathfinder-AP, Nick Logue’s twisted hillbilly horror saga “The Hook Mountain Massacre”, into mythic versions.

The lowest CR/MR creature herein, at CR 6/MR 2 smoke haunt, was my least favorite critter in the original module. It has been upgraded significantly: The critter now features reflexive fire damage, better healing from fire and lethal smoke pattern – with an interesting typo: The DC 187 Will-save here is probably a typo and should be 18 instead. On the plus-side, sickening smoke is nice.

At CR 9/MR 3, the mythic totenmaske gets mythic power-enhanced fleshdrinking and a bite that causes horrible ennui. More importantly, the thing can form the flesh of its victims and control the unfortunates as its lackeys/slaves. Nasty. As something new herein, the CR +2/MR 1 mythic ogrekin template, with 20 powerful and deadly deformities – and yes, these come with fitting upgrades over the regular ogrekin’s duality.

One of my favorite critters to come out of RotRL’s original modules clocks in at CR 11/MR 4, the skull ripper, whose beheading claws now are truly lethal, including immediate deadly finishing rips and the option to create screaming giant beheadeds or skull swarms. VERY cool, and yes, construction notes included.

The stars of the original book, though, would be the CR 13/MR 5 argoths, who now receive better charging via swimming, burrowing and climbing and the creature now features a truly deadly shredding spiral that destroys natural armor, causes bleed and wrecks items. These lethal abominations are spawn and favored of Lamashtu, offspring of the Mother of Oblivion, who clocks in at CR 18/MR 7, who erodes sanity with its lethal breath. As a kind of elusive, gigantic engine of destruction, it now does feature a mechanical representation of the ability to slip under the radar and any creatures summoned nearby are nauseated by the experience of her warped dimensions. The critter does come with two mythic feats, reprinted from the Mythic Monster Manual for your convenience. Odd: The two feats have two different formatting types.

Jason Nelson and Tom Phillips deliver mythic upgrades of some of my favorite critters that came out of RotRL and perhaps it’s due to the original critters being so good, but, as a whole, the mythic upgrades this time around did not feel as enhancing to me; particularly the mother of oblivion and argoth, while stellar creatures, pale before the coolness of some similar adversary-upgrades featured before in the mythic monsters-series. This should not mean that this is in any ways a bad file, mind you; I’m very much complaining at a high level here, a level very much reached by all the mythic monster books I’ve read, which have indeed spoiled me beyond belief. My final verdict for this one will be 4 stars.

You can get these neat mythic conversions here on OBS!
Endzeitgeist out.