The Wasting of Duny Slough 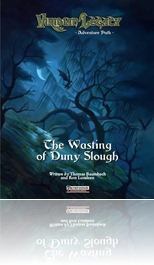 The first installment of Headless Hydra Games‘ Viridian Legacy AP for the Mor Aldenn campaign setting is 40 pages long, 1 page front cover, 1 page editorial, 1 page SRD and 1 page advertisement, leaving us with 36 pages of content, so let’s check this out!

All right, still here? The pdf kicks off rather interestingly, with a narrative that gives one great insight into the last days of Huansol, one of the legendary Exalted Champions, a legendary adventuring group that once were the celebrated protectors and scions of the City of Mages Mor Aldenn. If you’re GM planning to run the AP, be sure to check out the FREE Viridian Legacy GM’s guide, for the AP centers around the fate of said legendary group and the intelligent magic items that are their legacy. While most of the AP will be focused on Mor Aldenn (more on that in the excellent city-setting, also by Headless Hydra-games), this module is set in a more rural environment, to be precise, the peat bog harvesting town of Duny’s Slough, located in the outskirts of the dreaded Spindleflow Marsh. To get the PCs to Spindleflow Marsh, multiple hooks are provided, but what are they supposed to do there?

Well, Duny Slough has had an alliance with the local kobold population of the swamp for quite a while – mutually beneficial and all, but things have changed and the changes started with a small discovery – an ancient tomb was found in the bog and opened by a group of halfling explorers. Inside rested the remains of aforementioned exalted champion and the breaching of the ancient seal alerted the legendary Wyrmmother to the potential that the cloak of one of her ancient foes might fall into the hands of others. Her spirit reached out across the swamp and when undead rose and forced them to retreat from the site. Worse, the spirit reached to one particular disgruntled hag-servant of the legendary Night Hag and touched here – inspiring a plan to send her coven to sleep never-ending and bewitching K’Tchak, kobold druid and erstwhile ally of Duny Slough’s residents. Erstwhile, since he is driven by the enchantment to get the cloak of the Exalted Champion and incite his people into confrontation with the excavators and by proxy, Duny Slough. Worse, not content to let them survive, the bog hag enacts a cursed disease on the halfling explorer, sending them into a mysterious spiral of plague-ridden decline. Enter the PCs.

Duny Slough, the halfling village with its bridges, erected in the middle of the marsh in need of heroes and a full-color map as well as extensive information for researching the recent troubles. Now what the PCs don’t know is that the clock is ticking down…FAST. They only have 3 days before the encampment of the remaining halflings is overrun and 6 days to prevent utter failure from striking! They better hurry along the wicker paths and towards the kobold encampment, hopefully not resorting to overt violence versus the small reptiles. If they get lured into the swamp, they’ll lose precious time and indeed, each encounter has some option to gain haste points – by not pursuing fleeing foes, by not falling for a clerverly set up false path, by defeating an encounter (like an immature assassin vine or a bog ooze) in less than 3 rounds, by marching through the night etc. Depending on the Haste Points they have accumulated, the PCs will have a different situation on their hands when arriving at the tomb: Besieged by 16 kobold marhsrunners, the encampment at the tomb could still be remaining firmly entrenched by the kobolds – or even ablaze, for K’Tchak plans to ignite the bog and smoke out the halflings. And bog fires are hard to put out… If the PCs are particularly fast, they may even have the time to talk to the halfling explorers and explore the tomb prior to the kobold siege. Speaking of interesting territory – the sludge-covered tomb is haunted by disturbing effigies that guard the place and if the PCs manage to overcome these, they may actually get their hand of the mythic cloak. Sooner or later, the PCs will find the poor shaman K’Tchak, inflicted with the same wasting sickness as the halfling gleaners and might follow him to the bog hag and perhaps determine that he’s under an enchantment – to the lair of mastermind Caragma, a huge bog willow. Exploring the tunnels in the larger than life tree and vanquishing its guardians (including more bog oozes, a pugwampi, a giant leech, marshlings, flying infernal kobolds and finally, the bog hag herself. The PCs get a chance to end the plague she’s conjured from her cauldron, end the threat of her sleeping sisters -well, and have a nice cliffhanger, for when the hag dies, the Night Hag herself possesses the body of the traitor bog hag and utters some cryptic revelations and threats before letting the meat puppet slump to the floor.

Having saved Duny Slough from plague and conflict with the kobolds, the PCs have thus a chance to solve the module without killing K’Tchak and his ilk before they return to Mor Aldenn to research the strange magical cloak they’ve found…and that’s only the beginning, with two of the most powerful threats of the city watching them…waiting. For now.

The module also provides a short gazetteer of Duny Slough and stats for the new monsters featured, these being: The CR 4 Bog Hag, the CR 1/3 Flying Kobold (called Kuba) and the CR 1 Marschlings -all with beautiful b/w-artworks.

Editing and formatting are top-notch, I didn’t notice any glitches. The module’s layout adheres to HHG’s beautiful 2-column standard in full colour, with the 3 also rather beautiful maps coming in full colour as well. The artworks are b/w and universally belong to the higher tier of artwork-class, i.e. they are beautiful to behold. Not all is great in the area of formal criteria, though: We get no keyless maps of the adventure-locations to hand out to the players, which is a dman pity since the maps are aesthetically pleasing. The second major gripe I have with the module is that is has no bookmarks – at this length, this is simply not up to standard and makes navigation unnecessarily hard on the DM. Also, you should know that at over 50 mb, this file is not particularly tablet-friendly and that we get no printer-friendly version sans background/borders, which is yet again a minor detrimental factor.

Lack of bookmarks, no player-friendly maps, no printer-friendly version, large file size – come on, Headless Hydra Games! You can do so much better than that! This, honestly, pisses me off. Why? Because this is a great module. Seriously, it has an awesome wilderness trek, diplomacy, a unique village and a cool, iconic, exciting final dungeon as well as the cool haste-mechanics. The author-duo Ron Lundeen (of Run Amok Games fame) and Thomas Baumbach have created a stellar module that would score easy and glowing 5 stars + seal of approval, but the sloppy formal criteria make it impossible for me to give the rating that this awesome module deserves. Instead I have to grit my teeth and acknowledge all those minor gripes accumulating to the point where I can’t rate this higher than 4 stars. Please, HHG, update this module. I want to give it the glowing recommendation it deserves.

The Wasting of Duny Slough is available from: