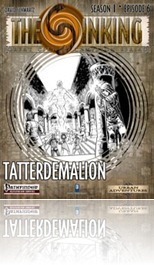 This installment of “The Sinking” from 0one Games is 15 pages long, 1 page front cover, 1 page SRD, 1 page editorial, 1 page ToC, 1 page advertisement and 1 page back cover, leaving 9 pages of content.

This being an adventure review, the following contains SPOILERS. Potential players might wish to jump to the conclusion.

Righty right, the Great City-adventures have provided some of the most exciting fêtes I’ve encountered in any written modules and the latent sense of aristocratic decadence reminiscent of the fin-de-siècle is one of the components I personally have always enjoyed about the setting. This particular installment of “The Sinking” fully capitalizes on the idea, as the PCs are hired to make sure a party of some decadent nobles goes smoothly – said party is to take place in a bathhouse (fully mapped, btw.!) right at the edge of the sink-hole. To add more complications, the bathhouse was supposed to be haunted, which develops a nice basic tension.

The PCs will have to contend with quite a few complications during the party – an albino python concealed by its particular colour, two hot-blooded young nobles almost coming to blows over a flirtatious lady, a brown mould infection that may claim the life of an attending guest and finally, once enough social and other complications have been sprung upon them, the climax of the adventure happens:

The ghost of the bathhouse appears! Only, there was never a ghost, but rather a trapped water elemental and a rather powerful guttermage called Burlstaff has taken up residence here and taken the gem containing the element as the centre of his new shrine. The grumpy fellow doesn’t necessarily want to hurt the attending crowd or the players and might make for a social resolution or a very tight battle once the PCs see through his ghost-bluff. Of course, the panicking crowd can get itself into quite some trouble and in the end, it’s up to the Pcs to save the panicking youngsters.

Editing and formatting were actually quite good – while I noticed a minor glitch here and there, I didn’t notice enough to rate this adventure down in and of itself. Layout adheres to the elegant b/w-2-column standard and the b/w-artworks and maps are top quality. The pdf is fully bookmarked. This particular scenario is rather interesting as it is rife with social complications and offers a nice twist on a rather creepy masque. The potential for the final encounter to be resolved without spilling too much undue blood is nice as well. I essentially have only one gripe – why not make the bathhouse be in danger of slipping over the edge/falling into the sinkhole? The angled bathhouse would have made for an exciting location and the natural disaster-component of “The Sinking” would have featured more prominently as well. Due to the minor glitches and said unrealized potential, I’ll settle for a solid verdict of 4 stars for this very affordable, neat little scenario.

The Sinking: Tatterdemalion is available from: