The Northland Saga Part 2 – Beyond the Wailing Mountains 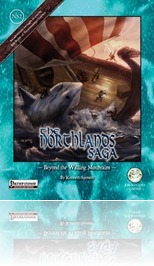 This pdf Frog God Games is 28 pages long, 1 page front cover, 1 page editorial, 1 page ToC, 3 pages of advertisement and 2 pages of SRD, leaving a total of 20 pages for the direct sequel to the first Northlands-saga-adventure, so let’s check this out!

Still here? All right! After having rallied the Ulnat and delivered them from the yoke of the second temple of Althunak, the PCs are enjoying a victory feats only to have one of the Ulnat being drifted ashore, encased in a solid block of impregnable block of ice – a dire omen indeed and Althunak’s revenge won’t be late. After surviving the vengeance of Althunak’s servants for the destruction of his second temple, the mood will no longer be festive, but rather one of dire need – in order to truly be free of the dread influence of the elder deity, the PCs will have to defeat the chosen of Althunak in his very first temple.

Situated in the white fields of death lies the abandoned city of the lord of winter at the shore of the lake of frozen dreams. In order to get there, the PCs will have to trek across the wailing mountains on the legendary trail of ravens and thus, we’re in for a wilderness adventure in the truest sense – avalanches, blizzards and servants of Althunak like frost giants, remorhazes and the fauna like mammoths and dire animals will make for deadly challenges along the way. Massive random encounter tables provide details and tracking food etc. should make the journey a challenge for the PCs in the barren lands of the Far North.

Worse, once in the fields of death, the legendary half-fiend dire bear Blue Fang will hunt them (he also comes with an awesome b/w-artwork) and making the way through the city will also provide a challenge, as Althunak’s servants await the PCs. If they manage to brave these dangers, the PCs will still have to deal with Althunak’s faithful and defeat Elvanti, the chosen of Althunak in his very temple – a daunting task indeed!

Editing and formatting are top-notch, I didn’t notice any glitches. Layout adheres to a 2-column b/w-standard and provides some neat pieces of original b/w-artwork. The pdf comes with extensive nested bookmarks, which is always a plus. This adventure is a very straight-forward sequel to the first part of the saga and should be run as a sequel – it almost requires the first pdf to make sense and lend a personal interest and edge to what makes the PCs venture forth. The wilderness trek is challenging and feels truly old-school – this part of the world is hostile, ancient and unique while providing trademark iconic locations. However, a DM should be familiar with environmental rules, as the pdf provides not a lot of hand-holding. That being said, the sense of walking on a legendary trail into a part of the world that has been abandoned due to hostile terrain and an ancient, disturbing evil feels almost like traversing the gates to a white hell itself. It’s hard to convey the feeling of exploring hostile, mythic terrain in a module, but the excellent writing by Kenneth Spencer does the trick. If you’re longing for the sense of vulnerability, of an ancient world and a challenge in an Inuit-style-themed adventure, this will most definitely feel awesome. If you add some content from OD’s Northlands, even better! Personally, I loved this adventure, its unique feeling and iconic locations and thus I’ll settle for a final verdict of 5 stars – If you already have the first one. If you don’t…well. Get the first one. I can’t see this one work well as a stand-alone module.

The Northland Saga Part 2 – Beyond the Wailing Mountains is available from: