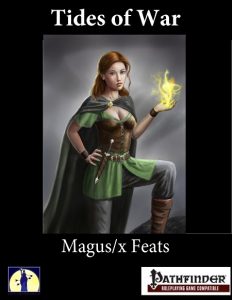 This installment of the Tides of War-series clocks in at 6 pages, 1 page front cover, 1 page editorial, 1 page SRD, leaving us with 3 pages of content, so let’s take a look!

As the first pages of introductory fluff clarifies, this pdf is intended to provide feats that facilitate a magus’ means of multicassing synergy – so what do the feats do?

-Arcane Brew: The alchemist crossover feat allows you to spend arcane points as part of casting your spell or attacking to ignore penalties imposed on Intelligence or Strength by mutagens or cognatogens, respectively. Solid, functional, no complaints.

-Arcane Rage: After preparing spells, spend up to 1/2 magus level arcane points to gain +3 rounds of rage or bloodrage for that day per point spent. Also, 1/day, expend 4 rounds of rage or bloodrage to regain 1 point for the arcane pool. Interesting – the increased potency would make this a superior trade-off when compared to the previous feat, but base class layout and multiclass-interaction isn’t as strong. Comes out as balanced.

-Blood of the Magi: If the 1st level bloodline power has a limited number of uses per day, spend 1 point of the arcane pool as a swift action to regain 1 such daily use. Nice!

-Cantrip Combatant: When using spellstrike or spell combat, you may cast any cantrip with a casting time of 1 standard action in conjunction, not only those from the magus spell-list.

-Focused Favoritism: Gain favored enemy bonus to concentration-checks versus one chosen favored enemy. This bonus only applies when casting defensively or adjacent to the target. 1/day regain 1 point of the arcane pool when defeating a favored enemy. May be chosen multiple times, with each new choice applying to a different favored enemy.

-Link Diversion: Gain +4 to concentration while adjacent to your eidolon or phantasm and an enemy. Smooth one! Avoids exploit via melee caveat – NICE!!

-Persistent Hexing: Expend 1 point from the arcane pool as part of using a single-target hex to try to affect the target, even though it has already saved versus that hex within the last 24 hours. May be used 1/2 magus level times per day.

-Spellstrike Infusion: When you accept burn for the kinetic blade infusion to execute spell combat or spellstrike, you can expend 1 point of arcane pool to treat your HD as CL for the spell cast. Nice one!

Editing and formatting are very good on both formal and rules-language levels. Layout adheres to Flying Pincushion Games’ two-column full-color standard and the pdf sports nice full-color stock art. The pdf has minimalist bookmarks, but more is not required at this level of brevity.

Frank Gori’s Magus-multiclassing-feats are a return to form for the series after the rather problematic installment on volley archery feats. The feats in this humble pdf are smooth, balanced, lack means to easily abuse them and enhance the multiclass synergy of the magus, in particular for class-combos that would usually be more problematic…and what more can you ask of such a brief little pdf? Granted, I would have loved to see a feat or two more, but what’s here works rather well. Hence, my final verdict will clock in at 5 stars – for one buck most certainly a nice array of feats.