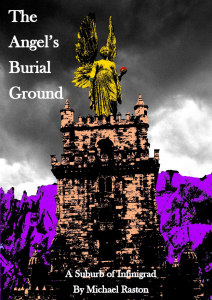 This supplement clocks in at 31 pages, 1 page front cover, 1 page ToC, leaving us with 29 pages of content, so let’s take a look!

So, first of all – this is an Infinigrad supplement, i.e. one with planar fantasypunk aesthetics; that being said, the place makes perfect sense in the context of e.g. subterranean environments of the weirder kind, or less traditional fantasy settings. The supplement does not subscribe to a specific OSR-rules system per se, instead electing to follow a general point. As in other Infinigrad supplements, HD are randomized, and each HD is supposed to be the equivalent of +1 to hit. When attribute checks are relevant, the supplement champions just rolling 3d6 to quickly determine attributes. The baseline HD of NPCs is d4HD@d6, so 1-4 HD, with each HD = d6. AC is ascending. NPCs tend to note special abilities as well as desires they might have. Navigation-wise, the pdf is internally hyperlinked. EDIT: The pdf now has bookmarks! A map of the suburb is provided, though it does not have a scale – it’s more about giving you an idea of where things are in relation to each other. That being said, the scratchy, hand-drawn style of the map did have some appeal to me. The map is featured twice – once with the landmarks on the opposite page, once with the keyed buildings hyperlinked on the opposite page.

I really like how buildings are presented: We get a read-aloud paragraph, and then a bullet point list that makes sense in sequence: First the obvious/lower storey content, then the less overt information. NPCs and faction-names are bolded for easy referencing, making the parsing of information simple. If you are one of the people who are particular about wanting your descriptions terse and evocative, this delivers. Unlike many comparable supplements, the book, in spite of this terseness, manages to retain a genuine sense of wonder and atmosphere. This is easily one of the most pronounced strengths here. It should be noted that this place can be easily grafted onto e.g. a planar metropolis like Sigil or the City of 7 Seraphs, or it could be used as a stand-alone environment.

The book comes with a custom random encounter table, a custom reaction table, and a 20-entry rumor table. We also get 20 male and female sample names.

Okay, that out of the way, this environment is best experienced without prior knowledge, so consider this to be a SPOILER-warning for players. If you’re not a GM, please skip ahead to the conclusion.

All right, so, this suburb is essentially a sprawling, former sanatorium, sprawling alongside a mountain range, with its whispering winds bringing messages, ostensibly directly from the gods. The place is choked with winged statues, but these indeed are the calcified remains of angels, their bodies conserved in perfect forms with the help of occult rituals. As a consequence, making angel statues can be deemed a subversive act/crime, and the suburb’s guards, the protectors of the wind, certainly won’t take kindly to that. Angels in this place are bereft of the connection to the divine, described as having annoyingly good looks and beatific sneers. There are also mutant angel factions – the first of these would be the savage storm angels, who seek to clear the suburb, and the other one would be the halfhere angels, who know the secret of turning corpses of angels to stone. There also are two fully realized angel gangs here – one being the disaffected angel youth led by a mysterious entity, the other being a mute, masked group – which ties in with the second leitmotif of the suburb.

The splendor of the angels and beauty of the place is sharply contrasted with the “scaled men”, humanoids devolved and turned lizard-like by an infectious curse that can and will potentially affect those they assault – including angels, who obviously consider it to a be a horrid tainting of their forms. An enormous dome of wrought iron cages a black, scum-coated lake, trapping the scaled ones – at least that’s how it looks like. On the stairs of silk, infested, beaked men held by chains beseech the visitors.

We can find workshops for plant-based augmentations, workshops of healing (and damaging) crystals, black marble towers containing banks (fancy a heist?), storm angel smiths crafting experimental weaponry, and more – each place herein is interesting in some way, and indeed, basically begs you to use it. I can’t picture any group of adventurers, any GM, confronting this place without being inspired in some way.

If that’s not the case, the book does come with a quest-hook generator – roll for a verb, an objective, and a reward – and go from there. A table of 8 complications may also be found, and we get a pretty huge dressing table for angels – you roll d6 to determine which of the 6 tables you’ll use, then a d10 – yep, 60 frickin’ entries. Green hair, with flowers budding. Red wings, blood dripping from them.  Hairless and with an elongated pate and pink halo. These are genuinely diverse.

If you’re such a sucky map-drawer as I am, you’ll love the building interior map page, which makes you roll d8 and d12 – you can roll dice to create the layout as you go, or print a couple of copies of this page, and then cut them out and combine them. Or you can use it just as intended. There also is an interior dressing generator – 4 columns, 12 entries each. Finally, if you want to spontaneously determine how NPCs relate to each other, there’s a table for that: D12 for an adjective, d12 for the relation.

Editing and formatting is very good on a formal and rules-language level, particularly for such an indie offering. Layout adheres to a one-column b/w-standard, with public-domain based artwork on borders. This was subtle, but I liked it – the different styles of architecture used for borders manage to underline in a subtle manner the atmosphere of this place. EDIT: The pdf now has bookmarks!!

Michael Raston’s expedition to this suburb of Infinigrad is inspiring in all the right ways. The atmosphere evoked is genuinely unique and managed to elicit a sense of jamais-vu I get to see rather rarely these days. It’s not artsy, mind you; you can take and run it as such, but this is most assuredly a game-focused book that wants to be used. It’s not navelgazing, nor is it pretentious in the slightest. As a whole, this managed to make me feel like I just stumbled into a weird crossing between Planescape or the City of 7 Seraphs, and a pre-cataclysmic Dark Souls or Demon Souls, like a version of Latria’s towers prior to falling. A sense of danger is ever present, and the contrasting of harsh leitmotifs is pulled off in an excellent manner. And this pdf is ridiculously inexpensive. 2 bucks. Seriously? Totally worth at least (!!) thrice as much! Considering the excellent bang for buck ratio, this does get 5 stars + seal of approval. If you enjoy unconventional fantasy environments, get this!

You can get this inexpensive, evocative supplement here on OBS!

You can support the author making more Infinigrad supplements here.