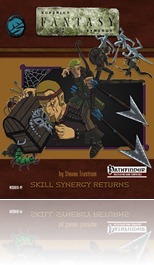 If you’re anything like me, you breathed a sigh of relief when PFRPG got rid of skill synergies. They were clunky, overtly complicated and often forgotten. In summary, I don’t know a single player or DM who actually liked how they worked. Now that I’ve established that, let me assure you that the skill synergies herein work nothing like those in the 3.X-days of old, instead providing us with a wholly original system: Essentially, you can opt to modify skill checks with your primary skill by complementing them with a secondary skill, for example making feinting via Bluff easier if you succeed at an acrobatics skill check. These secondary skill checks, however, are anything but a sure bet: Each of the secondary skill uses has 9 potential outcomes that range from utterly failing (Dc missed by 15+) the second skill check to utterly rocking it (DC surpassed by 20+), making the additional skill use a gambit. Furthermore, the original skill DC is modified depending on the action you try: Using acrobatics to enhance your climbing, for example is against the DC of the climb check -5. Note that these secondary skill checks do not supplant the original skill checks, but add options to handling skills. The possibility to gamble and modify your primary skill checks definitely opens up some interesting new options, if you are willing to run with the additional dice-rolling they require. Advice on how to handle skill synergies and e.g. using them depending on classes are included in the deal as well.

This is by far not where synergy stops, though: The next section provides us with feat synergy-rules. To give you an example on what that actually means, I’ll take the very first of the synergy effects, adamantine lungs. To qualify for this synergy, you have to have the feats athletic, great fortitude and endurance. If you have these 3, you get the benefits of adamantine lungs, making it possible to hold your breath for 50% longer than normal. This is one of the simpler synergies, though, several other needing a selection of up to 6 feats that e.g. open up the option to use whirlwind attack to force enemies surrounding you to step back from you.

What this does cannot be understated: First of all, it provides tangible benefits for characters who take feats that may not be wholly optimized, but fit in line with an organic character development. Secondly, the synergy effects could easily be considered special fighting styles and tactics that could easily be utilized as non-monetary rewards by a DM. In fact, you could also make these synergy effects regular feats if you don’t like the general idea. While reading these effects I did not notice one I’d consider broken or uninteresting and in fact, am enjoying the whole section and the way in which the material presented can easily be modified to suit your and just about any individual game.

Chapter 4 details class synergy, which is one big love-letter to multiclassing: Essentially, the synergy-effects once again are based on having access to different prerequisites, but instead of feats, we now are talking about class abilities like sneak attack, mutagens etc. Need an example? If you’re an alchemist/barbarian, you can benefit from the Liquid Rage-effect and brew a special mutagen that restores a limited amount of rage rounds or even extend your current rage! Even more so than the stellar feat-synergy-section, this chapter opens whole new possibilities and incentives for multiclassing and customizing your characters and, once again, could also be used as story-rewards, organization-benefits etc. – in fact, you could probably craft a whole setting of cool organizations from these synergies.

Chapter 5 goes further by providing magic synergy effects, something that I bet has come up in your game: Ever had your players e.g. try to brittle structures, weapons etc. via fire and cold damage? With the rules provided in this chapter, you have now the option to make elemental physics matter in your game without being unbalancing – concise rules for all the synergy effects are provided and ensure that using magical tactics in the fights of your group finally matter. Add to that the options these synergy effects provide when interacting with terrain and you’re in for a couple of pages of sheer awesomeness. It should be noted that weird combinations like a paladin/barbarian-cross-over are included, but the author has explained that this strange combination, prohibited by alignments, will make more sense with an upcoming release.

Less obviously awesome, but nevertheless brilliant is the final chapter, which is wholly devoted to craft synergies. If you’re playing in a low magic campaign, this chapter is essentially a must-have and reason enough to justify the asking price in and of itself. Essentially, the chapter provides additional crafting rules to add mini-templates to your equipment. As with the skills, failing the second craft-skill has potentially negative consequences on the item’s usability, making adding these special qualities a gamble. The added modified properties range beyond armor-ruining weapons (which can be found here, though!) and include special vials that deal their splash damage in a larger area and even weapons that have been specifically tailored and weighted to your individual character. In order to use these synergies, though, the crafting character has to once again, fulfill certain criteria, ensuring that not everyone can craft these modifications.

The pdf ends with several pages of reference sheets to facilitate usage of the new rules herein.

Editing and formatting are good, though not perfect – I noticed several misplaced blank spaces and other minor glitches. While not impeding my understanding of the rules or generally being a hindrance, another pass at editing would have been nice. Layout adheres to a full-color 2-column standard and the artworks are a bit cartoony for my tastes. if you own “The Spellweaver”, you know what to expect. The pdf comes with a printer-friendly version as well as a separate reference sheet pdf. What can I say? Whether you like the new skill synergy rules will depend mostly on whether you consider the additional dice-rolling a pro or a con, but enough rules and variants are covered to tailor the content to your game by restricting the usage of the synergy skills.

While I’m still a bit undecided on the section on skill synergy, the other synergies covered are gold and no-brainers – whether you include feat-synergy as story-rewards, feats or flat-out synergies, the chapter is a definite winner. the same holds true for class synergies and finally, magic and craft synergies, which provide options galore as well. Even better, while all of these synergies could be added to your campaign, the rules are open and versatile and enable you to introduce them in just about any way you like to your campaign, cherry-picking and customizing the content.

Supremely ambitious in scope, Misfit Studios’ second pdf is a challenging design that retains top-notch customizability while providing easy to insert, fun and smart rules to your game, making this humble pdf a true winner and very hard, if not impossible, to dislike. In fact, my only gripes with the massive and extremely versatile content lie in the minor editing glitches and a personal dislike of the art-style. Usually, I’d go 4.5 stars and round down to 4 due to aforementioned glitches, but that would, quite frankly do injustice to the stellar design and content herein, where in fact one chapter alone would make for an excellent supplement, let alone that many brilliant ideas. I really enjoy this book and would love to see a POD, as I consider this pdf worthy of being printed and while I’m not 100% sold on the skill-section, I do still consider this pdf an excellent example of stellar crunch-design. Thus my final verdict will be 5 stars, with the seal of approval missed by only a margin and remain with a definite recommendation. Congratulations to Steven B. Trustrum!

Superior Synergy: Fantasy is available from: