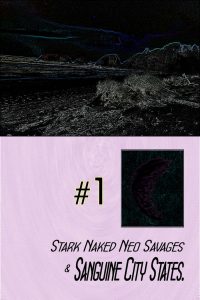 This pdf clocks in at 13 pages, 1 page front cover, 3 pages blank,1 page back cover, leaving us with 8 pages of content, so let’s take a look!

It should be noted that the back cover sports a doodle of a muscular male body (sans head), including a non-erect penis. If this offends you, well, you have been warned. It should also be noted that this supplement depicts a really horrific place, where institutionalized rape is a theme; a proper and prominent trigger warning before the pertaining section has been included in the pdf, for which I am rather grateful. Still, consider this to be a TRIGGER WARNING for this review as well.

This straddles the line of experimental fiction/poetry and rpg supplement – it is system neutral, lacking stats, and while there is a random “you find this” table, it is a glimpse at some messed-up, strange place. The artwork in the pdf, much like the cover, is a strange array of distortions and color-changes that acts as strange, psychedelic glimpse at the weirdness depicted.

To paraphrase the first lines of the pdf: The beach once had a calm curtain along the yellow beach; however, the Green Insistence is swelling in slow ruination, and it colors the sky the color of wine. Euclidean lines shift impossibly and it surrounds and sings…and how beings interact with it? In puzzling prose, it is noted. The Pretenders are some of the folks that interact with the Insistence, their city, Driftwood, sporting 3 sample layouts, can be found – and within, functioning Xerox machines hint as a post-apocalypse in a world not unlike our own, where reality has splintered. This is not necessarily all grimdark (though most of the pdf should be categorized as such), though – there is a pitch-black, subtle sense of humor to be found here – when e.g. wacky assassination attempts require that the target must literally fall, for example. Metalheads may smirk at the mentioning of a depressive who is a member of a Doom cult and is hence literally committing VERY slow suicide…

For untold centuries, the wine-red people of the domes, situated in dangerous waters, warred. Everyone who enters becomes a citizen. This is where, once again, the trigger warning has to be repeated, for the cities are a disgusting place, where the right of the strong rules – no challenge may be denied and the winner of a duel gets to rape the loser…and worse, a small part of the population experience violence as euphoric. This is particularly nasty, since, in a harsh and deadly world, the domes sport a disgusting excess of resources – food, armor, superb manacles, healing nanodrones – biomachines and autovends would allow these places to be utopias…and instead, their inhabitants have made them dystopian nightmares.

Two portals are on the beach – one leads to a glass-green beach where the sea is frozen and two portals lead back or to annihilation…or another place like Carcosa, Narcosa…but ultimately, the folks meditating before taking the plunge do not know, their keening scouring the beach.

I am going to deviate a bit from my usual format here: The pdf has no bookmarks, which is a bit of a comfort detriment; the strange photos/artworks conspire with the text to create a strange nightmare-scape of truly savage/post-apocalyptic proportions. The words resonate and what is here is interesting, if gruesome, even for my tastes. Would I want to play in this environment? Not necessarily. The red-domed cities ooze a kind of desperation and disgust with mankind that is almost palpable, but yet, there are aspects of this pdf that most be commended for the strength of the visuals employed with a rather minimalist word-count. Chances are that you’ll either love it or hate it, but, as this is PWYW, you can decide for yourself. Personally, I wouldn’t use the concepts as written, but as a reviewer, I need to try to be as objective as possible, if that’s possible here. Ultimately, there are some cool ideas to be taken from this book, but chances are that most groups and people will balk at the themes herein. Hence, my final verdict will clock in at 3.5 stars, rounded down – it is an interesting experiment and has some stark visuals, but it also derives too much of its appeal from shock value.

It should be noted, though, that this verdict stems from the fact that I can see this being 5 stars for some, 1 star for others – you very well may be thoroughly disgusted by this exceedingly dark pdf. You have been warned.

You can get this pdf here on OBS for PWYW.