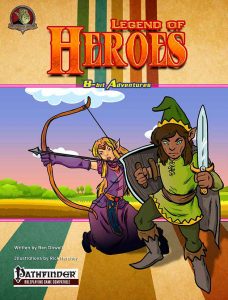 This installment of the 8-Bit Adventures-series clocks in at 42 pages, 1 page front cover, 1 page editorial/ToC, 1 page SRD, 1 page back cover, leaving us with 38 pages of content, so let’s take a look!

Okay, so, unless you haven’t noticed, this is basically a Legend of Zelda toolkit for Pathfinder, with Nintendo IP filed off. As such, I think I should comment on my own history with Zelda: I liked the games, but I wouldn’t consider myself to necessarily be a fan – I have played them all up until Twilight Princess, with Majora’s Mask, unsurprisingly, being my favorite. They are good games, but don’t scratch the story-itch I look for in games beyond excellent gameplay.

So, if you are a rabid Zelda-fan, well, then this will probably already be in your shopping cart at this point, right? Anyways, the pdf begins with customization options for the kingdom of Hyrule, erh, pardon, Highland, which btw. comes with a nice full-color map, which, however, sports no scale. Alas, no key-less version for handout purposes has been included either. But I digress. We first begin with basically a critter-by-critter reskinning/modification process. Grippers are upgraded to Large size and based on chokers, with the modifications suggested noted; Robed Wiz (CR 9) is based on a more limited clockwork mage. The rocktopus is based on the Tome of Horror’s mudman. The CR 4 bladed trap (comes with creation notes) represents a new creature, and the section also features the CR 8 burning skull, the CR 11 cactus worm, the CR 1 Treenut and, of course at CR 16 Cursed Warrior Droch-lann, the Gannon stand-in, who is realized as an orc cursed warrior magus 18. I noticed minor hiccups, but nothing serious – the section is usable as provided.

That would, btw., be a new archetype herein who gets diminished spellcasting and may sacrifice a prepared spell as a swift action to create a shadowy armor. Instead of 5th level’s bonus feat, the archetype gains 60 ft. darkvision or increases an existing darkvision to 120 ft. – solid, if unremarkable.

Okay, so far regarding the bestiary-side of things. We move on to 8 new feats: Bomb shot lets you expend a bomb as part of jumping to add its damage to your Acrobatics-check – which results, obviously, in hugely inflated Acrobatics-results. I would not allow this anywhere near my game usually, but in the context of this supplement, it makes sense. Minor point of critique: While the feat is fully functional, its verbiage is a bit clumsy. Shaped Charge lets you, as a full-round action, expend a use of a bomb a ranged touch attack against a door, lock, wall, etc., ignoring hardness – the attack is always successful against unattended objects and the bomb’s splash damage is negated. There also would be the Luminous Metal feat, which lets you expend 30 gp to make metal objects you craft cast light as though they were candles – no, that is NOT a reference to the spell. Minor complaint: Why not note the range of the light produced? Looking it up is somewhat inconvenient. Improved Luminous Metal lets you upgrade that to 60 gp cost and torch-equivalent light. Would I spend feats on these usually? Heck no. In the context of this supplement? Why not. Shield Ally lets you block ranged attacks with your shield – when using a full attack, you can forego one attack, making an attack roll equal to the foregone attack. If you win the swingy comparison of attack rolls, you deflect the incoming projectile. Shielding allies is possible at -4 to atk, and you may not deflect boulders and must be aware of the attack. My loathing for atk-comparison mechanics is well known at this point; suffice to say, it is a decent representation of the Zelda-game-mechanics.

Reflect Shot builds on Shield Focus and Shield Ally and lets you reflect an incoming ranged attack as an AoO against any creature whose ranged attack you successfully block, provided it is within range. Okay, what constitutes range here? I assume the range of the incoming attack, analogue to the games and taking e.g. Shot on the Run etc. into account…but it would have been nice to see that stated. Reflect Ray does the same for rays, with the same minor range-snafu. Shield Rider is a concession to the game aesthetics and may well be a drawback – when riding with your shield, you lose the shield bonus to AC, but movement rate increases by 10 feet when riding downhill, but only when not wearing medium or heavy load…which is closer to a trait than a feat in power-level. The lack of choice for the character is also puzzling – RAW, the feat locks you into this behavior.

The pdf also sports three new spells: Retriever enchants a weapon to steal with its next attack (strangely using Sleight of Hand instead of the steal maneuver, which is a bit wonky); freezing ray is a variant of scorching ray which adds paralysis at 7th level…which is WEIRD, for the new ability is not based on caster level here, deviating from PFRPG design tenets. Magnetism is a pretty complex one with various appliances, and is based roughly on telekinesis, which is unfortunately reflected in the rules-integrity, e.g. specifying violent thrust spellcasting attributes for wizard and sorcerer, but not for the other classes eligible to use the spell. Not *bad* per se, mind you, but in such instances, you can see that a bit more polish would have been neat.

The pdf also sports new equipment: The diseased goblin poo stick simple weapon and the spring spear exotic weapon, which is a very potent weapon that is flexible in a way usually only magic items provide – it can be used with and without reach and may be thrown – in the context of Zelda, I’d give it a pass. We get 5 pieces of magical equipment: The leaf mask is a plant shape I spell in a can, usable 1/day. The miniscule cap works 3/day as reduce person. Soup stones provide nourishment, while saga stones reincarnate the possessor for a paltry 600 gp, being basically a kind of extra life. Trapfinder torches can be used once and net a bonus on Perception to spot traps and hidden doors, but at the same time, they do not denote how long they last. One could default to the acute senses comparison, but yeah…a bit rough. Aquatic armor (+1) nets swim speed; lava armor nets fire resistance 10 and allows the wearer to execute short-range free action touch attack fire blasts as retribution – it is also somewhat low on the price-scale for that. Dazzling weapons (+1) autodazzle light sensitive creatures or those made of shadow or shadow conjurations.

Now, that would be the rules-section – this pdf, however, also doubles as a campaign kit, providing angles to draw the PCs to Hyru…eh, Highland, as well as a fluff-only write-up of the cast of characters. We get a fully spelled-out prophecy of the legendary hero as well – which is pretty neat, for it taps into the suggestions that this could be run as a 1-on-1-scenario. While the suggestions are basic, their inclusion is very much appreciated. The role of the Triforce (here called Tetrahedron Quadriad) as a McGuffin is explained (and is used for an interesting if simple, optional puzzle that can be extremely helpful) and the first quest focuses on saving steeds – the structure of the encounters and their basics are noted in the tradition of Campaign Kits; from there, we move on to the shrines – Lake Highland, the Skull Dungeon and the Mountain of Fire, for the final showdown at Castle Highland. Suggested creatures are noted and APLs for each chapter suggested. More advanced rules, if any, are hyperlinked. We also get a few DCs and the skeleton of the sequence is all ready to be fleshed out by the GM.

Editing and formatting, on a formal level, is really tight – no complaints there. On a rules-language level, the pdf sports a few rough patches here and there, but retains its functionality. Layout adheres to a happy and colorful 2-column full-color standard and the full-color artworks provided are loving bows to the franchise. Cartography of the land is nice, though I wished we got a key-less version. The pdf comes fully bookmarked for your convenience.

Ben Dowell’s bow before the Zelda franchise does what it sets out to do – it translates the somewhat wonky concepts of the Zelda games to PFRPG. It provides a toolkit for playing Zelda in PFRPG. Mission accomplished. Now, if you’re no rabid Zelda fan, then this will have significantly less appeal for you: There are a couple of rough patches in the rules-integrity, and while they don’t sink the pdf, they are enough to disqualify the material for my regular PFRPG games. They are also, system-immanently, as they’re translating very basic concepts, not world-shaking. I am also a bit puzzled by this pdf starting off with monsters, moving to player material, and then once more going for the GM-content in the campaign kit-section – starting off with a player section, then moving to the GM-section would have made much more sense.

On the other hand, this pdf’s demographics *are* the fans of Zelda – and if you count yourself among them, you will quite probably sport a broad, nostalgic smile while reading this. Similarly, this may well be a good way to bring younger kids into the roleplaying fold and teach the game o them: While the GM should have some experience under his/her belt, the whole scenario is pretty child-friendly and thus suited for even young kids, provided you guide them regarding mechanics.

How to rate this, then? Okay, to be honest, this did nothing for me – I am simply not the audience of this book. I am neither prone to nostalgia, nor a fan of Zelda per se. For me, the rough patches weigh heavy on this supplement and if you feel similarly, then you should probably skip this. I’d be a sucky reviewer if I’d rate the pdf according to these observations, though – I have to take into account that many of the things I consider jarring are directly based in trying to adhere to the franchise as faithfully as possible. While there are still a couple of instances where some rule-component is a bit wobbly, and while I wished e.g. the Gannon-archetype was more interesting, the book does a solid job at what it sets out to do. Not a superb one, but one that will probably warrant fans of Zelda getting this. You should be aware that videogame aesthetics trump those of Pathfinder here, and I strongly discourage using the content herein in regular games, but for what it is, it works – hence, my final verdict will clock in at 3.5 stars, rounded up due to in dubio pro reo.

If you’re a fan of Zelda and interested, you can get this pdf here on OBS, also in PoD, just fyi!!!