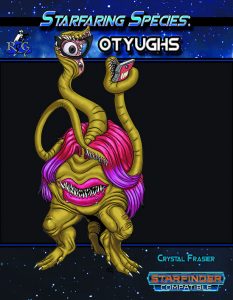 This installment of the Starfaring Species-series clocks in at 9 pages, 1 page front cover, 1 page editorial, 1 page SRD, 1.5 pages of advertisement, leaving us with 4.5 pages of content, so let’s take a look!

The otyugh as described herein comes with all the flavor-information you expect from SFRPG – including a box on “playing an otyugh”, and what other races probably think. Rules-wise, Otyughs get +2 Constitution and Wisdom, -2 Intelligence, and 6 HP. There are alternate ability adjustments provided as well: +2 Wisdom for “civilized” otyughs, +2 Strength, +4 Constitution, -2 Intelligence, -2 Charisma for elder otyughs (obviously lopsided, wouldn’t recommend using this one for players; they are Large, though, making them more likely to be targeted in-game), and young otyughs are Small (not capitalized properly), have 4 HP, a land speed of 35 ft., and Dexterity +2.

They are Medium aberrations with 60 ft. darkvision, and otyughs with 1 or more ranks in Perception or Survival receive a +2 racial bonus to that skill, representing their sense of smell, a nice operation that has some potential in design-aesthetics. Otyughs may apply their Wisdom modifier to Engineering checks instead of Intelligence, but items thus created are obviously junked together, and decrease their selling value by 25%. Otyughs are immune to both diseases and radiation, and may survive in vacuum for their Constitution score rounds without ill effect, which is pretty potent overall, considering the increased potency of diseases/radiation. Otyughs have three tentacles, with two behaving as arms with a 10 ft.-reach, which are non-archaic unarmed strikes. The third tentacle holds the eyes, and lets the otyugh glance around corners, gaining only improved cover when doing so.

Otyughs, flavor-wise, are contextualized as less of the stupid scavenger (though such stereotypes still exist), and more as sedentary, introverted survivors, the cliché of the brute has been divested on the notion of being a result of nature, and instead the result of a previous lack of education, which has since been more than relativized. That notwithstanding, the notion and importance of appetites, and of art and eclectic interests receive additional emphasis, adding some depth to the species.

The pdf also presents a selection of 5 alternate racial traits: You can be aquatic and be amphibious, including a 30-ft.-swim speed, at the cost of the flexibility of the eyestalk, the increased reach and the natural weapons. Alternatively, this may be exchanged for a scaling ability to vomit forth acid at short range, with 3rd level and later gaining a scaling corrode critical hit effect. Additionally, they also gain their class level as resistance to acid damage.

The boost to Perception and Survival, ranks provided, can be exchanged with one pertaining to Diplomacy and a Charisma-based Profession. The scavenging crafting trait may be replaced with +1ß land speed, or with a potent bite attack (that behaves akin to the vesk’s natural weapon specialization), which is also accompanied by the ability to subsist on stone, metal, plastic, etc. A proper template graft is provided as well.

The pdf concludes with 4 new feats: Elastic Tentacles lets you use a move action to extend your natural reach by 10 feet, including the eyestalk, if present, but doing so makes fine manipulations and your Reflexes less efficient. Iron intestines provides immunity to ingested poisons, as well as an untyped +2 bonus (would have preferred the SFRPG-standard insight bonus for feats here) to saving throws versus effects that would cause the sickened or nauseated conditions. Junkyard Savant lets you improvise barely functional technological items capping at your class level as item level for the cost of 1 Resolve Point. Thankfully, the feat explicitly states that the GM remains the final arbiter here, and the feat prevents resale cheeses – not possible, thankfully.

Personally, I think that it would have made sense to further designate that the items must at least theoretically have more than one charge or more than one increment of sustained use, but that is just me being super nitpicky. This will not lead to issues in most games. Ultimate Survivor, finally, is pretty darn potent, as it greatly increases the time you can survive in vacuum, and also lets you spend 1 Resolve Point as a swift action to gain ½ character level as energy resistance of your choice. I don’t think we needed that energy resistance addition here; at the very least, I do think that the available energy forms should be limited to the basic energy forms, but that may be me.

Editing and formatting are executed very well on a formal and rules-language level. Layout adheres to the series’ two-column full-color standards, with the rendition of the author-as-otyugh, I assume, being a super-charming touch. The pdf has no bookmarks, but needs none at this length.

Crystal Frasier knows what she’s doing – her depiction of the otyugh is a charming one that doesn’t seek to mitigate what makes them special per se; instead of invalidating the canon and expectations to the otyugh, it engages in a well-executed reframing of the species as a species you may wish to actually play.

As a whole, the otyughs presented here definitely can be considered to be among the more powerful SFRPG-races, depending on how much the GM enjoys using hazards and radiation/diseases as dangers to be encountered. (I very much love doing that, and I kinda wished the otyugh had some sort of scaling for radiation at least hard-coded into its write-up – though that is easy enough to add in.)The jury-rigging of technological items is a powerful boon, and the combination of the abilities to peek around corners and the vacuum-resiliency did let me come up with a variety of cool ideas for plots, for scenarios where having an otyugh on board certainly is a true boon. I won’t lie, the pdf does feature a couple of design-decisions that I’d have handled differently, that rub me slightly the wrong way.  However, I don’t rate just based on what I’d like or prefer. When viewed neutrally, this is an inspired race.

Considering the low price, I can definitely recommend this humble pdf for what it does with the species. It manages to play differently, and as such, this receives a definite recommendation for all but the most low-powered of SFRPG, which means my final verdict will clock in at 5 stars. Well done!