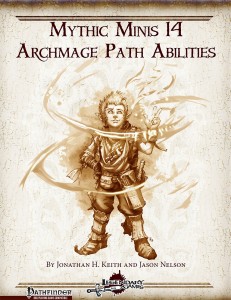 This time, we’re all about abilities for the archmage path so let’s check this out!

We kick this one off with 4 1st tier abilities – two of which will immensely help alchemists, with one helping with extracts and using mythic abilities (essentially fixing a GLARING hole in the base rules…) and a further one allows you to create better bombs. Spell Dilation is also rather cool, allowing your PC to make more or less minor metamagic-style forming modifications of spells. Those are cool. Detect Animals or Plants as an at-will SL, powered with mythic power, which is used to change the species-specific nature of the ability, though, feels very anticlimactic.

We also get 4 different 3rd tier abilities, one netting you a fear-aura when casting spells/using SLs, another increasing bomb-damage-dice and a third taking the cake, with the option to create even more impressive oozes (hint: There are two Mythic Monster pdfs to make use of!) – if you’re an alchemist. The final one makes your magical walls better.

The 6th tier ability is a godsend for arcanists, as it allows you to expend mythic power to escape grapple etc. via teleportation and for more mythic power, even potentially bypass teleportation-blocking effects – with concise rules, mind you. Neat!

Jonathan H. Keith and Jason Nelson deliver here – the path abilities make sense in the context of the path and the poor, neglected alchemist finally has some valid reasons to take this path. This is a blessing and a curse, though, seeing that the majority of the content herein is for the alchemist. Personally, I’m a big proponent of the class, so that’s more than fine with me, but it might not be what you bargained for. Even if you did, though, you should be aware that the oozechemist ability is a reprint from Mythic Monsters: Oozes, Too and as such not new. Which brings me to a slightly unpleasant topic – I really liked this pdf and the options herein – what’s there, is argueably great, especially for alchemists. The one page has about 1/4 – 1/5 empty space at the bottom, though – space that could have been filled with more content. Add to that the cool (but reprinted) oozechemist, and this pdf, even for its length, falls short on the content-side. What’s there is damn cool, if very alchemist-centric, required even and would warrant a rating in the highest echelons of my system, but the relative brevity + reprint (which btw. eats as much space as all other 3rd tier abilities COMBINED) mean I can’t go as high as I would have wanted. My final verdict will clock in at 3.5 stars, rounded up to for the purpose of this platform. Alchemist aficionados may add +1 star here.