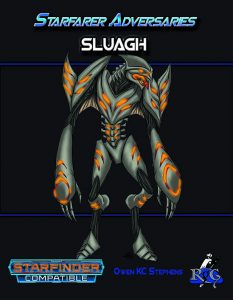 This installment of the Starfarer Adversaries-series clocks in at 8 pages, 1 page front cover, 1 page advertisement, 1 page SRD, 1 page editorial, leaving us with 4 pages of content, one page of which is devoted to a one-page version of the creature-artwork, suitable to act as a handout.

The sluaghs receive a whole page of background story – face-stealers, servants of the unseen good; Void Demons, Lords of Dark Matter – many are the names applied to them, and none of them are kind. Their empire may have collapsed, but this has not mitigated the threat that these shapechangers represent.

Two different sluagh are included herein, at CR 6 the sluagh infiltrator, and at CR 10 the sluagh taskmaster. Sluagh are Medium outsiders with the evil, native, shapechanger and sluagh subtypes. As for change shape, they can use it as a standard action to look like any Medium humanoid or outsider, provided they have seen the creature, and in such a form, they learn the languages of the creature mimicked. Sluagh can absorb equipment – technological, hybrid and magical unattended equipment may be integrated as a standard action. A sluagh may only use one item per type in a given round, and using them takes as long as though they had them in hand. They can fire so-called void bolts, which is an EAC-targeting ranged attack dealing untyped damage….why? Why add untyped damage? SFRPG has so MANY damage types, why start with this stuff again? -.-

Nominally, sluagh are based on the spellcaster array, and both arrays correctly include the atk-boost provided by the outsider graft. The save-boost is applied to reflex-saves, just fyi. Both builds use technomancer spells, and use their high attack value for aforementioned void bolts. Melee attacks are executed with claws, which have bleed 1d6/2d6 as critical effects. Minor nitpick: The S-indicator for “slashing” damage is lower case here. The sluagh infiltrator has one master skill less than usual, instead going good on that – something that the higher CR-version repeats. Good skills are Diplomacy and Sense Motive, with Bluff, as befitting of a shapechanger, being the master skill. The sluagh seem to get increasing DR – the CR 6 version has DR 5/good, the CR 10 on DR 15/good.

The pdf also mentions a void rune as a weapon fusion – when sluagh die, they leave a void crystal, which can be made to create a void rune fusion seal that can only exist as a seal. A weapon with such a fusion deals untyped damage (URRRRGHHHH), and is considered to be a fusion of the highest-level weapon it can be applied to. This prevents other fusions, sure, but it’s reliable damage that can’t be negated. Blergh. Hate it. Kill it with fire.

Editing and formatting are very good on a formal and rules-language level. Layout adheres to the series’ two-column full-color standard, and the artwork is nice. The pdf has no bookmarks, but needs none at this length.

Owen K.C. Stephens’ sluagh are a cool critter – the builds are precise, well-executed and interesting. The fluff is cool and I love the notion of providing unique rewards for critters defeated!

I hate untyped damage. For multiple iterations of d20-systems it’s been a bane, begs to be exploited, and I frickin’ LOATHE the weapon fusion. I hate what it represents. Let’s take away interesting options, and instead provide boring, but consistent damage that can’t be negated. This never was a good idea; it’s not interesting, and the sad thing is, much like static bonuses to atk versus choice, they might be boring, but they are more efficient, rewarding players for doing stuff that’s less fun. I love the idea of rewarding PCs for slaying bosses with unique treasure – the notion is great, but I…can’t…get past the untyped damage. I’m sorry. It just makes me angry. If you don’t mind that, then consider this to be a solid 4-star critter file. If you’re like me, this decreases the appeal of the supplement considerably, and I’m assuming I’m not the only one with such a reaction. As such, my final verdict will clock in as a median 3 stars.

If you consider my reviews to be useful, please consider leaving a donation or supporting my patreon.