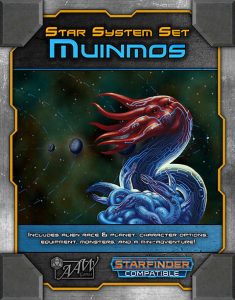 Since I will base my reviews on the collected sets, I will provide an overall conclusion etc. at the bottom

This section is penned by Michael Allen.

Here, we get planet stats with atmosphere hazards where applicable and a nice visual rendition of the star system. We also get notes for Branch 67-128TT, a station that comes with brief notes and an abstract mini-write-up of the station. 3 adventure hooks are provided, but there is a rules-language hiccup here: It’s Computers check to scan, not “Scan Check.”

This section is penned by Justin Andrew Mason.

The race herein would be the Sideribus Volunt, Medium humanoids descendent from Aventyr’s humans. They have managed to extend their lifespans greatly and adapted to life among the stars, gaining a +2 racial bonus to Piloting checks to navigate or astrogate. They get two bonus languages, low-light vision and immunity to radiation, but reduce their speed to 25 feet in normal gravity. They get 4 HP and deviate from Starfinder race conventions in that they get +3 Int, +1 Con, -1 Str. Uneven modifiers engender minmaxing as much as in previous d20-based games. Not a fan. They get 4 hp. Weird: The write-up, per se interesting, mentions that they are tactile empaths with their own race, but fails to specify how exactly that’s supposed to work, rules-wise. We do not get a “Playing a Sideribus Volunt”-section in the write-up. They get a decent b/w-artwork that looks pretty fantasy-ish.

Verdict: Not a fan. The race has a nice idea, but fails to capitalize on it, ending up bland. Rules-wise not impressive. 2.5 stars, rounded down.

This section is penned by Colin Stricklin.

We get two variant themes and a new one, as well as a nice little section of prose. The first variant theme is the Black Market Med-Tech, a variant Outlaw. Theme knowledge nets Medicine as a class skill (or a +1 bonus if you already have it) and +1 to Wisdom. Checks to remember diseases, drugs or obscure medical knowledge are 5 lower. Instead of the 6th level benefit, this fellow gets the envoy’s Surgeon expertise talent, reprinted here as part of the ability. At 12th level, you get chop shop, which lets you sell augmentations second hand at 10% value, and implant augmentations at base price into your body. The second theme-variant is the sideribus volunt wanderer, a variant of the scholar, whose 6th level ability reduces the time information gathering takes to 1d2 hours. You also get a bonus equal to ½ the number of languages you speak. Instead of the 12th level ability, you get a palm-sized holographic crystal orb that records thoughts and memories of the assigned wanderer. 1/day, you may commune with it as a “full round action” (should be full action). This communion nets you a +2 competence bonus to Perception checks and Knowledge checks you’re trained in for an hour. You may also dismiss the effect when rolling for initiative for a +4 bonus. The third option here would be the primitive. These folks get to choose two terrain types froma list. DC about hazards and geographical features pertaining them is reduced by 5, Survival is the theme-knowledge skill and the character gets +1 Strength. 6th level nets the mechanic’s quick repair trick. 12th level provides another terrain, +2 to initiative in the chosen terrains, and lets you take 20 on Survival check in the terrains. 18th level, up to 2/day when acquiring items of significant value sans purchasing them, you regain 1 resolve. Okay, what’s supposed to be “significant value”? No idea.

Verdict: Okay, but not mind-boggling. 3 stars.

This section is penned by Colin Stricklin.

Okay, here, we have a burnt scrivener as a new technological item with an item level of 6. This duplicates holographic terrain but misses the italicization and level. If the hologram is dispelled, the facet burns out. 20 facets are provided. If all facets burn out, the item explodes. Metamorphic tissue sample would be a level 1 magic item sans bulk. The rules-text references full round action instead of full action. It’s basically grey goo that can be transformed into facsimiles of items, which can net you a bonus to social skills. The goo must be fed and doesn’t actually replicate the items. We also get the graviton capacitor, which reduces damage of extreme gravity, utilizing a special adamantine shard that can be fired in starship combat. Complaint here: Can scanners pick up this mine of sorts? We also get 3 ship styles, including a tier 15 Gargantuan carrier and a tier ¼ survey drone, as well as an unmanned prove depicted with vehicle stats.

Verdict: Solid, but not brilliant. 3 stars.

This section is penned by Michael Allen.

We get three monsters with two cool original artworks: Giant data leeches (CR ½) can sunder equipment and data may be recovered from them. A swarm of these critters is also included – these can temporarily short circuit items. They also cause an injury-based mental disease. The second critter is the videssian shifter (CR 4), a gooey-aberration with an amorphous body. They can form ooze bullets, 1/week boost their holographic image SP. Racial traits are included, but I wouldn’t recommend using these as a a PC race. They are lopsided and pretty damn strong.

The adventure is “The Fate of SKL-167H”, intended for 4 PCs. It comes with a solid map (sans scale noted) and reprints the data leech monster swarms. It’s penned Michael O. Holland.

The following brief discussion contains SPOILERS. Potential players should jump to the conclusion.

Okay, just GMs around? Great! The PCs are sent as bodyguards to help scan a gravitational anomaly with their scientist in charge somewhat obsessed with the shapeshifting Videssians. The PCs find the abandoned ship, get to explore it and may save a member of the weird species. Returning him home will net the PCs a grateful, if weird ally.

Verdict: Fun little sidetrek that introduces the critters and themes of the system. 4 stars.

Editing and formatting are good on a formal and rules-language level – a few PFRPGisms have crept into the supplements. Layout adheres to a 2-column full color standard and artworks range from okay, if fantasy-looking b/w-pieces to really nice full-color artworks. The pdf comes fully bookmarked for your convenience.

Colin Stricklin, Michael O. Holland, Michael Allen and Justin Andrew Mason’s first star system is a bit of a mixed bag. It’s not a bad system per se, but neither did it really capture my imagination. The two races could have yielded more interesting interactions, and there are a couple of rules-hiccups. My final verdict for the complete set is 3 stars.

You can get this set here on OBS!

Just want the planet? You can get it here.

Just want the race? You can get it here.

Just want the equipment? You can get it here.

Just want the themes? You can get them here.

Just want the monsters? You can get them here.

Just want the mini-adventure? You can get it here.