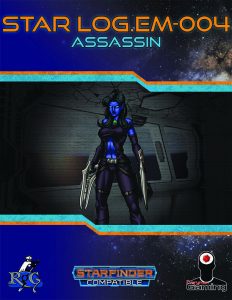 This installment of the Star Log. EM-series of minis clocks in at 6 pages, 1 page front cover, 1 page editorial, 1.5 pages of SRD, leaving us with 2.5 pages, including the usual introduction, so let’s take a look!

See, this archetype is a great example why I like Starfinder’s pretty open archetype-system – Assassins should be varied! There’s a reason I adore the more modular solutions presented for Assassin concepts in Pathfinder (most notably, the great Modular Assassin by Interjection Games and the exciting Assassins of Porphyra by Purple Duck Games). But I digress.

6th level nets Death Attack. In order to use the ability, you must succeed a Bluff, Disguise or Stealth check against 20 + 1.5 times the target’s CFR; the respective checks are properly codified. On a failure, the target notices you as a threat, preventing you from performing death attacks against it for 1 day unless you spend 1 Resolve Point. Okay, is that an action? I assume not, analogue to many envoy improvisations, but I still think it would have been nice to see it explicitly stated. You must study the target for 3 consecutive round, and after that, you may move up to your base speed and then perform the death attack as a full-round action.

The death attack must be executed with a melee or ranged weapon that you’re proficient with or a spell with a casting time of 1 standard action that deals Hit Point Damage and requires an attack roll against the target’s respective appropriate AC. Minor complaint – personally, I probably would have specified that the means of delivery determine the AC used, but that is pure aesthetics and won’t influence the verdict. If you hit with these paradigms, you deal normal damage to the target, the victim must succeed a Fort-save (governed by your key ability score modifier) and either be temporarily paralyzed or take bonus damage governed by item levels of the weapon in question. Nice for fans of the Starfarer’s Companion: 9th level-spellcasting classes get their spell-levels translated alongside Starfinder’s regular 6-level spellcasting progression. If the damage exceeds the remaining hit points, the target must succeed a second Fortitude save…or he’s dead – no bartering, no resolve – dead. You can’t make death attacks with unwieldy or explosion weapons or those that require a full action to attack. Spring Attack and Shot on the Run synergy are provided. It should btw. be noted that death attacks are NOT death effects!

9th level yields Hide in Plain Sight, already hinted at in Starfinder’s Hide skill use of Stealth, makes an appearance here – it pretty much does what you expect: Hide while observed, provided you have some sort of cover etc. The ability concisely defines interaction with darkvision etc. and other senses. At 9th level, there would be quiet death, which lets you make successful death attacks that kill or paralyze silent via Stealth. Pretty much the lack of the paralysis-option’s an oversight here. The 19th level ability enhances death attack: You can spend Resolve Points to reduce the number of rounds required for death attacks to a minimum of 1 round (2 Resolve) –spending Resolve this way doesn’t take an action, fyi. Additionally, foes slain via death attacks crumble to dust, preventing the more common ways of returning the dead to life.

The last 0.5 page is devoted to the contextualization of the assassin archetype within the Xa-Osoro system shared by Everyman Gaming and Rogue Genius Games – we hear about the Dragonheir Concordance corporation, a ruthless kobold mining corporation; we learn about the roles of freelancers, the deoxyian gene-trading goliath helix and Sanguinary stewards, sworn to protect the coffins of the vampire lords – some cool angles here.

Editing and formatting are very good, I noticed no grievous glitches. Layout adheres to the 2-column full-color standard of the series. The pdf comes with a solid full-color artwork and has no bookmarks, but needs none at this length.

Alexander Augunas’ assassin had me start rather skeptically – the Skill-check based mechanic may yet be unhinged, as Starfinder, so far, is a very young system. That being said, the strict limitations in place and the relatively conservative formula mean that, basic math-wise, this will, at least for not, not come apart – and after that, the archetype still has some knobs to turn, so kudos there – smart design. I generally liked this archetype. I Sooo, how to rate this. I did enjoy this supplement, though, frankly, I would have liked to see some benefits for less optimal assassin-weapon-choices; RAW, range is pretty much king here, since the studying doesn’t have a range. That makes sense in Starfinder’s universe, obviously, but yeah, consider that to be a bit of a lost chance in my book. Ultimately, my final verdict for the revised editionwill clock in at 4 stars, +0.5 stars for getting the paralyze-oversight right in the revision.

You can get this nice archetype here on OBS!