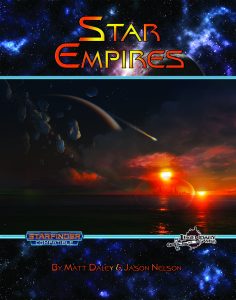 This massive supplement clocks in at 100 pages, 1 page front cover, 1 page inside of front cover, 2 pages of editorial, 1 page introduction, 2 pages of ToC, 1 page SRD, 1 page back cover, leaving us with 91 pages of content, so let’s take a look!

Okay, so the tl;dr-version of this book would be that it’s Kingdom-building for Starfinder; as such, the supplement includes army, colony and empire record sheets in the back – nice to see them included!

Okay, so, regarding terminology: A Sector is a significant area, which should be at least a 12-mile diameter hexagon; a District is a region, neighborhood, etc. – a Sector can contain up to 100 Districts. A Colony is pretty much that – it can be a village, a metropolis, etc. – it must contain at least one District; for every District beyond the first, the Consumption increases by 1 BP. A District can also hold up to 36 Modules – this is the smallest size that something that has a serious impact oin society can have; it could be a home, a specialized planetoid, etc.

Time is measured in Turns – each of these roughly equates to one month. A Moment usually represents one day; both of these are not cast in stone, though – it is perfectly possible to engage in empire-building over centuries. A Turn contains 30 of these Moments.

Every empire has four stats – Economy, Loyalty, Stability and Unrest; these are also the  basis for the respective checks – roll a d20, add the respective stat, done. As before, BP is the measure of abstract resources; BP are paid on a Turn-basis, as denoted by consumption, and the Control DC of an Empire action or situation has a basis of 20 + Size in Sectors + total number of Districts in all Colonies + special modifiers. Population is abstract, and Size represents the number of Sectors an empire has – a new one has a Size of 1. Treasury denoted the amount of BP the empire may access, and dipping into the negatives there increases unrest.

We begin with choosing an ethos (which is opposed by another) – these increase either Loyalty or Economy by +2. This ethos may be changed by leaders during the Edict Phase, and slots left open net a bonus to Stability instead. Minor nitpick: This erroneously refers to Ethos as trait once, which confused me for a second.

A leader has a Rulership Bonus (RB) that starts at 0 and increases by +1 for every 6 levels, for every 5 ranks in a relevant skill, for having an appropriate feat, or for having an exceptional (+3 or greater) ability score bonus in the relevant ability score. The leader positions are ruler, ambassador, chief justice, chief technologist, general, head of security, high priest, magister, space warden, speaker, spymaster and treasurer. Optional roles included are consort, successor and viceroy. As before, vacancy penalties are included.

An empire’s Turn sequence is as follows: Pase 1 is the Upkeep Phase – you make a Stability check, and on a success, you  decrease Unrest by 1 – if your Unrest would be decreased below 0, you gain 1 BP.; on a failure of less than 5, you increase Unrest by 1; if you fail by 5 or more, you instead increase Unrest by 1d4. Then, you subtract Consumption from the treasury; if treasury becomes negative, you increase Unrest by 2. Unrest also increases by 1 for every Empire attribute that is negative. The Enforcer, if present, may attempt to reduce Unrest during this step. Having an Unrest of 11 or more makes the empire lose one Sector.ö Unrest of 20 means you fall into Collapse, which prevents taking actions and makes all Empire attributes behave as though they were 0.

Phase 2 is the Edict Phase . vacant leadership positions are assigned, and Sectors are claimed. A Sector must be adjacent to at least one other Sector. The Sector to be claimed must be explored, cleared of monsters or hazards; thereafter, you spend 1 BP to claim the Sector. You may also abandon Sectors to reduce Empire Size, but this does increase Unrest by 1 for every Sector abandoned, by 4 if the Sector contained a Colony. In a claimed Sector, you can prepare the construction of a Colony, which requires paying the Preparation Cost. You can construct Infrastructure in your Colonies, which apply benefits to the empire. Then, you issue edicts.

During Phase 3, the Income Phase, you can spend credits to increase BP, collect taxes (determined by taxation edicts) – this Phase deals with filling your treasury. Phase 4, the Event Phase, has a 25% chance of an event occurring; if no event occurred during the previous Turn, this chance rises to 75%. So, that’s the basic Turn-sequence.

Edicts fall into several categories: Expansion edicts, armament edicts, holiday edicts, improvement edicts, recruitment edicts and taxation edicts. These are generally self-explanatory and feature their own tables, though recruitment deserves special mention – It is based on a Loyalty check, with the CR (Army Challenge Rating) capping at a Colony’s Capability score.

This brings me to Colonies – these have an alignment, and 5 attributes: Capability, Culture, Defense, Law and Supply. These are generally equal to the colony’s level, but are modified by forms of government (8 provided) and infrastructure. Colony-levels are determined by the amount of BP invested in them, with a handy table provided. Speaking of whioch: I already touched upon founding a colony, and indeed, proper time-frames for exploration, preparation, etc. are provided by region – establishing a Colony in the void of space requires less exploration, but is BP-wise more costly to prepare for than, say, doing the same in wetlands. Farm, Road and Mine costs are provided, and beyond the topography, the richness of the respective biome  and the atmosphere also impact costs and behavior of the Colony. This sounds complex, but once you’ve grasped it, is a pretty smooth process.

Special terrain features like ruins, free colonies and the like are included in the engine as well. The pdf then proceeds to go through the vast amount of types of infrastructure you can generate, with higher levels in each category costing more BP and more modules. Each such type of infrastructure also presents a category boon for the Colony. The system is simple and easy to grasp. The events follow a similar paradigm, differentiating between empire and colony events that could affect a Sector, a Colony, and some of them, like Plagues, may remain continuous until dealt with.

The basic system is cleanly and tightly presented, but if you’re like me, you may want more out of this book – and it gladly obliges, providing a serious set of advanced rules. Colony size modifier based on Empire Size, Commission edicts, diplomatic relationships (which become harder, the more different the ethos of the parties is from one another) include treaties, alliances, embassies and the like – all covered. Endowment edicts allows for a focus on art and learning, sponsoring certain infrastructures; espionage and exploration – you get the idea.

An empire also starts with fame or infamy 1 (ruler’s choice) and every level 3 or 4 infrastructure increases fame or infamy by 1; a level 5 infrastructure instead increases your choice of either by 2. At certain Size thresholds, these values also increase. For every 10 points accrued, your citizens gain a Diplomacy or Intimidate bonus. Festival edicts take place in a specific Colony, and are concisely defined – as is a suggested array of XP-gains for leadership. Declaring Independence and Unification are also found.

Trade deserves special mention: Establishing a trade route increases your BP every Turn. In order to deal with these, you add together the Moments of exploration you require for a trade route – the total is the Trade Route length (TRL); divided by 10, this is the RM (Route Modifier); TRL minus empire’s Size to get the Length Modifier (LM). Establishing a route takes 1 Turn, and establishing one costs at least 5 BP. The first time a colony is reached thus, you must make an Economy, Loyalty and Stability check, with the DC equal to Control DC + RM +LM – BP spent provisioning the expedition. 2 success are required to establish the route; 3 fails = total failure, 3 successes a grand success. A Trade Route provides its benefits for 10 Turns, and deals with Food, Goods, or Raw Materials.

The book also deals with warfare. ;V, RV, DV, Morale – the system operates smoothly and analogue to PFRPG’s rules. Army sizes range from 1 – 10, are abstract, and have a number of divisions based on size, Hit Points based on size, and the ACR is determined by the CR of constituent creatures. The mass combat rules follow a similar, classic paradigm, with abstract battle zones featured – we have a camp zone, a command zone, a ranged zone and a melee zone. We have overall strategies and 5 battle phases – Recon, Tactical, Gunnery, Melee and Rout phase. Bloodied (below half HP), Defeated (0 HP), Destroyed and Disbanded (0 Morale, failed Loyalty check) are provided. Costs for army equipment are grouped by tier, with costs provided and a serious array of different tactics provided. The supplement also accounts for the talents of special commanders, and a massive array of boons included. Some of these are permanent – they are designated with a (P), but t5ehre also are ones designated with a (A) – this is not properly explained, but I’m pretty sure that this only applies to a single army. I may be wrong, though. Cool: The engine has accounted for SFRPG’s critical effects in the serious list of special abilities available, and from envoy improvisations to technomancer hacks, there are quite a few cool options here.

Extended time in the field, covering travel, living off the land, battlefield terrains and the like – a metric ton of awesome material here! The book also contains a massive amount of sample armies for your convenience.

Editing and formatting are very good on a formal level (minor note, for example: The colony record sheet erroneously refers to modules as “lots”) and on a rules language level. Layout adheres to a really nice two-column full-color standard, and the book offers quite an array of nice full-color artworks. The pdf comes fully bookmarked for your convenience, and the sheets are also included as separate pdfs.

Matt Daley and Jason Nelson deliver big time here – this is the inspired means to weave truly grand narratives among the stars. While the starship/mass combat synergy has been relegated to another supplement, this is still one amazing, glorious supplement. There are a few instances where e.g. stating explicitly that, if not noted, an infrastructure takes up one module would have been nice, and the (A) hiccup noted similarly could have used explicit mentioning. That out of the way, these are ultimately nitpicks in a truly inspired, amazing supplement – if you liked kingdom-building. If you didn’t like the system, then this will obviously not convert you, but as far as I’m concerned, it is amazing to see this book so soon in SFRPG’s life-cycle! For me as a person, this is a truly grand and fun offering – my final verdict will clock in at 5 stars + seal of approval, and this does receive my EZG Essentials-tag for SFRPG-campaigns that seek to tell sweeping stories of empires and civilizations rising and falling in the vastness of space; as such, it also is a candidate for my Top Ten of 2018.

You can get this massive, inspired empire-building toolkit here on OBS!

Enjoying my reviews? They take a lot of time and effort to write, so if you could spare a tip via direct donation or by supporting my patreon, that would be greatly appreciated!