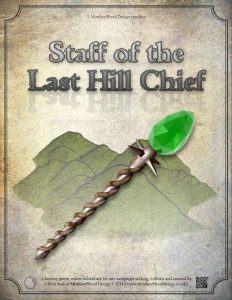 This brief system-neutral module clocks in at 8 pages, 1 page front cover, leaving us with 7 pages of content, so let’s take a look!

So, how does the module achieve its system-neutral approach? Via symbols. The pdf utilizes several symbols to denote ceiling height, depth below surface of a given room, lighting, sounds, smells. The respective entries offer a first and second glance entry of information and combats are rated via sword-icons – one is easy, 5 is very hard. Loot is represented by gem-symbols. Skills, tasks and the like are represented by hand-symbols – again, one symbol indicates a very easy task, 5 a very hard one.

The basic presentation and inclusion of way to surface etc. adds a nice level of detail to the module and collates information for a region pretty smoothly, so kudos there. The map of the complex presented here (a cairn) is provided as a front- and a side-view version in b/w and is pretty detailed and rather well-made, considering the low price-point. However, if you’re like me and a GM who wants key-less versions redacted for player use, then you’ll be disappointed – none are provided.

And this is as far as I can go without going into SPOILERS. Potential players should jump to the conclusion.

All right, only GMs around? Great! The staff known as Wyreaus was a symbol of leadership and he who holds it would also hold sway over the people – strife blossomed regarding the staff’s ownership until a wise chief, one Skaeus Blackwyr, claimed the staff. When he died, the people buried the staff with him. The hill folk have since moved on, but now orcs are staging raids from this tomb, which is probably how the PCs are led to this place. As the PCs approach the cairn, they will have to deal with a Bear Owl and then with orcs, giant rats and finally, more orcs and an ogre. As the PCs explore the crude caverns, they will probably stumble over the entrance to the ancient chief’s tomb, where a silty well is guarded by living statues. The spirit of Skaeus, tormented by the theft of the staff, still roams these halls, begs the PCs to take the staff with them…and summons his last ounce of strength to dislodge the staff from its hiding place in an adjacent room – swimming to the staff (underground river) will attract the attention of a giant crab, which acts as the boss. The pdf assumes that the PCs hand over the staff to gain their proper reward.

Editing and formatting are good – apart from affect/effect-level glitches, I noticed nothing glaring. Layout adheres to a printer-friendly two-column b/w-standard and the pdf has no artworks. The cartography is excellent, as mentioned, but sports no player-friendly map versions. The pdf has no bookmarks, but at this length, that’s still kinda okay.

Glynn Seal’s little system-neutral module excels in the level of detail: I really like the emphasis on senses and first/second look differences in what can be perceived. The cartography is excellent, considering the PWYW-nature. The module itself is a painfully vanilla mini-crawl, though. It does not have much branching or choice or consequence to offer. I have seen pretty much all aspects here done better, even in briefer modules, so if you expect anything out of the ordinary, then look elsewhere. I you just need a classic scenario and can’t be bothered to make one, then this certainly has appeal. That being said…you can actually find better ones out there that do have system-relevant information, sparing you that additional work-load…which leaves me in a bit of a pickle, for I can’t fathom a scenario where I’d seriously get some use out of this. This is not bad, but even for PWYW, it is not the best of options out there. My final verdict can’t go higher than 3.5 stars, rounded down to 3 – it’s a harmless, inoffensive standard scenario with a nice level of detail.

You can get this for PWYW here on OBS!