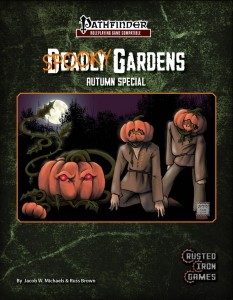 The first extra-length special of the Deadly Gardens-series clocks in at 13 pages, 1 page front cover, ~1/2 a page editorial/SRD, leaving us with 11.5 pages of content, so what do we get?

Well, after a brief introduction, the first piece of crunch we get is the spirit cudgel, a +2 gloom bough heartwood club that protects the wearer as protection from evil when an incorporeal undead comes within 60 ft. Okay, I guess.

More interesting would be the first creature, the delightfully twisted CR 5 brain pumpkin – basically, these thinking plants have dangerous tendrils and a gaze that can enthrall those subject to it, who thereafter get close to the pumpkin, only to have it implant a brain seed (a new infestation) in their brains, which then proceeds to subvert the host. Implantation also ends in a short-term confusion effect. If the host fails to remove the seed (which requires magic!), he’ll turn into a pumpkin-headed creature (CR+1 template), of which 4 sample builds are provided. Additionally, the killer pumpkin has an array of rather twisted SPs…however, this sentience does have a price – in a cool Achilles heel, the creature is subject to mind-affecting effects, unlike normal plants. f you want, you can combine these more mature body-snatcher pumpkins with AAW Games’ “A Frightful Time” kid-friendly module, since said module sports pretty much such creatures as foes…only more goofy and less potent. Just add this creature, change the hook, et voilà – nastier, adult scenario.

The second plant covered herein would be the CR 8 Gloom Bough, a huge, bone-white, leafless tree with an affinity for negative energy. These trees increase the numerical penalties and bonuses of emotion-effects and those sans numerical effects seen their saves penalized while in the presence of these sinister trees. Gloom boughs can convey general emotions and hijack emotion-based effects – both spells and even barbarian rages, though effects that need to be willingly ended require a save. Absolutely awesome: The sinister trees work in symbiosis with haunts, increasing their potency. Following the theme of emotions, there is the vengeful creature template (CR +1,with 3 sample creatures applied, ready for use) that grants a fear aura and a sonic damage-causing, stunning shriek. The template didn’t blow me away, but I did enjoy the 6 sample haunts added to the fray – from spectral crows and horsemen to critical miss-punishing ego whips, skeletal arms from the ground or a harsh demand that may castigate the hapless, the haunts may not be too subtle, but they are generally well-crafted and fun – particularly compelling would be a compulsion to slay teh kin of the affected – really nasty one!

Now, one of the staples of the series have been natural items harvested from defeated creatures and we get a bunch herein as well – from the gloom bough heartwood already hinted at in the beginning to skeletal powder, zombie flesh and brain pumpkin pulp, these are pretty awesome. The new, negative energy resistance granting drug bone white makes sense when facing evil clerics and the use of parts of the monsters as power components further provides depth for the two plant creatures featured herein.

Editing and formatting are very good, I noticed no significant glitches. Layout adheres to Rusted Iron Games’ two-column color standard and the pdf provides gorgeous artworks for the critters – in color for one (see cover), while the gloom bough gets a beautiful pencil-drawn b/w-illustration – kudos! Beyond these, the pdf also sports some nice, smaller pieces of b/w-art. The pdf comes fully bookmarked, which is nice to see indeed.

Russ Brown and Jacob W. Michaels deliver two killer plant-creatures, both of which sport unique and fun mechanics, which are further complemented by the awesome power-components and interesting mundane, natural items. Granted, I saw the killer pumpkin done before, but the incarnation herein is nasty and unique and does the trope more than justice. I’m a sucker for haunts, so I enjoyed these as well – while the grasping skeletal hands may sound trite, the haunt dealing damage based on movement is pretty cool (and dangerous). That being said, if I have one complaint here, then it’s that the two templates don’t live up to the cool drug, items and critters – they are pretty standard fare as far as I’m concerned. Still, at the low asking price, my final verdict will clock in at 5 stars.

You can get these critters and items here on OBS!
Endzeitgeist out.