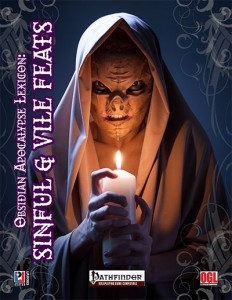 This collection of dastardly feats clocks in at 19 pages, 1 page front cover, 1 page editorial/SRD, leaving us with 17 pages of content, so let’s take a look!

Okay, before I go into this pdf, let me state that loudly and clearly – this is a book of feats, yes…but it is a book full of Clinton J. Boomer-feats. This sets this pdf pretty much apart from every feat-pdf you’ll ever seen…why? Well, we all know how feats work, right? Basically, they are short pieces of crunch that provide a rules-option, for the most part a relative generic, wide-open one that makes a character better at something or adds an option to the character’s arsenal or makes it viable. Mr. Boomer’s approach to feats is completely different, beginning with flavor-text – most of his feats sport a whole paragraph of flavor-text before going on to present the prerequisites. But guess what? Said prereqs are actually pretty hard to fulfill – when one takes a look at Bright-Burning Tempter, for example, one notices that the feat requires class levels as antipaladin AND of the wishcrafter ifrit sorceror archetype, a rather uncommon option.

So yes, there are feats intended to make less viable options that make for cool character concepts more viable. The second thing a newcomer to his design-approach would note is that the benefits…are complex. As in “I can literally list a huge amount of archetypes that do less” level of complexity.

To take the aforementioned feat as an example: When a creature benefits from your wishbound arcana, it is thereafter declared as a “supplicant” – said targets may be healed via touch of corruption as though they were undead and you may spend 2 uses of it to remove a variety of different negative conditions. In a twist, this does not remove disease or addiction – just the effects. Additionally, when you use wishbound arcana, you may expend a number of daily uses of touch of corruption, capping at sorceror level, to evoke one of two or both of the following effects: Effect 1: You may apply a metamagic feat to the spell cast, requiring expenditure of touch of corruption equal to the amount of spell level increases the metamagic feat would apply. The second effect makes the power you bestow addictive, prompting the supplicant to save versus a scaling DC to not fall prey to your power’s addictive qualities. Additional expenditure of touch of corruption uses increases the potency of said addiction.

That was one feat. You’ll notice 3 peculiarities here – a) this does more than a simple archetype, b) is incredibly cool and evocative and c)…is arguably pretty strong, as it basically unlocks paladin mercy-style tricks for the antipaladin class. Via a follow-up-feat, you can use touch of corruption as a free or immediate action to gain the benefits of e.g. air walk/water walk, bypass fire resistance (but not immunity – immune targets instead get half damage), destroy unattended objects, lace flaming burst on all attacks, king’s castle or elemental body II (fire elemental only) for 1 round and you may expend 2 uses to provide the benefits until the end of your next round. Oh, and the supplicant needs to be able to ask for the respective benefits. This feat is aptly called Answer to Apocalyptic Desires and it should pretty much highlight something to consider – these feats are powerful; specific and complex, but very powerful.

Now this is pretty much what makes Obsidian Apocalypse the perfect fit for this kind of design – after all, most “regular” folks have either been killed or corrupted…and these feats very much make clear how the forces of darkness could win.

Another feat herein, Devil’s Gate, allows you to expend ki in the dark/dim lighting to summon eidolon/lesser eidolon surge as a SP, with higher levels allowing for progressively higher expenditures of ki for more powerful SPs. There is also a similar feat that substitutes grit for that, which is slightly more problematic, considering that grit is a refreshing resource as opposed to ki. Both feats have btw. in common that they don’t have a prerequisites-line. While it’s rather apparent that one should have both eidolon and the respective pool, the nitpicker in me still would have wanted a line à la “eidolon class feature, ki/grit pool class feature.”

Elemental Adeptness is also interesting – it locks your Elemental Fist into a given element, but grants you a revelation associated with the given energy type (oracle class level = character level) and allows you to, as a standard action, expend spell-level ki or grit points to cast mystery-spells, though they are treated as SPs, get a scaling save DC and they are governed by Wisdom.

Another feat basically takes the skinwalker-theme – you can wildshape into a disgusting proto-beast (at decreased duration – only 10 minutes per level) and fluidly switch between forms – including swarm forms, though these make you exceedingly vulnerable versus AoE-effects. Oh, and yes, animals and vermin shy away from your abominable form. There is also a feat that ties Bloodrager to Charisma, making the class work better with the undead, while Sense of the Shrike allows you to know when your name/title is uttered – the more often the target has spoken your name, the easier you can sniff out the fool who dared to speak your name.

It should be noted that the pdf blends Boomer’s design rather well with the unique options of Obsidian Apocalypse – the genesai-race, for example, can extend greatly the use of shattersoul blade, expending it for alternate, defensive purposes. Several other feats follow similarly complex rules-operations, codifying spells as castable via class resources, extending spell-lists.

There is also a feat called Terrifying Blow that lets you utilize natural attacks as Awesome Blows, in spite of not fulfilling the prerequisites for the latter and while the feat provides synergy with the Awesome Blow-feat, the potency of the maneuver and the minimal prereqs here mean that this is rather nasty – even before the added AoE shaken-effect accompanying the attacks. On the plus-side, however, it should be noted that a vast amount of synergy between other feats and this makes the mechanics here solid. Insane gunslingers (or swashbucklers) worshipping the elder gods can inflict damage upon themselves (to hasten activation action) and expend grit/panache to temporarily gain the tarrasque’s carapace…and yes, the damage cannot be mitigated.

It should also be noted that the Burning Necropolis provides a feat tree, which, when combined, in text exceeds two pages – and they are intriguing, for prereqs contain exposures to various environmental hazards and the feats add necropolis tokens you can expend to increase the potency of your summon monster spells…oh, and the final feat lets you call forth a fully statted golden-clad legion of skeletons (using the mob rules)…and it can be remotely detonated.

What about a mantra of madness that allows you to use Linguistics as an immediate action to negate attacks or touch attacks by substituting it for AC? Yes, these feats are powerful…but oh so well-written. No, I haven’t even touched upon e.g. the feat that makes undead gunslingers basically revenants and lets them rejuvenate for as long as they have grit…including the return of their weaponry…

The pdf also contains the Singer of Praise, a bard archetype, who gets a cleric’s Ref- and Will-save progression, 4+Int skills per level (and a decreased class skill-list), but replaces bardic knowledge with access to a mystery (but no revelations, though they can be gained via Extra Revelation). The archetype may only inspire allies sharing their faith (or are within one step of the alignment axis) via bardic music. 2nd level provides a domain, subdomain or inquisition instead of versatile performance, while well-versed only applies to creatures opposed to the patron deity. 5th level provides channel energy at -4 levels instead of lore master and 10th level unlocks a sorceror bloodline, adding bonus spells, treating sorceror levels for bloodline powers as -6. This archetype is very complex, considering the amount of moving parts – so yes, depending on the amount of resources you use, it can become problematic. However, it doesn’t have to be.

Editing and formatting are very good, I noticed no significant glitches. Layout adheres to LPJ Design’s two-column full-color standard for Obsidian Apocalypse-pdfs and the pdf comes with gorgeous full color artworks. The pdf is fully bookmarked and a second, smaller version intended for mobile use is provided in the deal.

Okay, so why did I ramble on for about half the review on the design philosophy behind these feats? Well, because I need you to understand that these feats are not balanced against your average standard feat – what we have here are essentially character concepts in feat form, narrative options. Unlike most feats, the material contained herein, sans exceptions, is so evocative and unique, it made me really want to create characters FOR the feats, not the other way round – prior to reading this, I wasn’t aware I needed a wishcrafter antipaladin villain – now I certainly KNOW I need one of these guys in my rogue’s gallery! Much like the feats Clinton has crafted for Legendary Games’ Legendary Villains-series, these feats are pure, evocative brilliance….and should not find their way into the hands of players unless you’re gunning for a truly high-powered campaign or need them to make a character concept work. (Alternatively, these make for great story-rewards…) One can also see Jeff Lee’s talented design in these pages.

Here’s the thing, though: This approach to feat-design fits perfectly with Obsidian Apocalypse’s brutal, high-powered and twisted setting – the last heroes and villains, the sheer epic scope of their conflict…it works with the setting exceedingly well and complements it in a delightfulyl wicked wayx – even among master Boomer’s feats, some of these stand out by virtue of their imagery and awesome themes. If the title wasn’t ample clue for you: These feats are intended for the bad guys out there and at best, provide morally questionable power and yes, they stumble here and there regarding the precise implementation of prerequisites…but they also manage to juggle extremely complex concepts sans stumbling.

Let me reiterate this: I am going to rate this according to its intent -as a feat-toolkit to craft truly astounding villains or high-powered anti-heroes. And, oh boy does this do its job – usually, reviewing feats is a rather tedious, none-too-exciting process. While reading this book, however, I thoroughly enjoyed myself…and when it was done, I immediately felt the urge to craft some unique adversaries. A single feat herein can inspire a whole cadre of villains – and that is, pardon the horrible pun, a feat indeed. As a GM toolkit, this is pure awesomeness, the astounding concepts and overall execution mitigating the minor issues this has. So what’s my final verdict?

Well, I can’t rate this the full 5 stars…but this is the first feat-pdf in ages that really blew me away. Hence, my final verdict will clock in at 4.5 stars, rounded up and I’ll add my seal of approval to it. Seriously, if you’re looking for complex, inspired and extremely flavorful design and a crunch-book that is actually a good read, get this! Beware when using this for PCs, though.

You can get these inspiring feats for the champions of darkness, madness and all things unsavory here on OBS!

And while I’m at it – the Crisis of Infinite Earths/Ultimate Galactus-crossover adventure-saga Crisis of the World-Eater by LPJ design is currently in its kickstarter’s final days – 3 days to go as per the writing of this post, and it’s moving towards 5e-conversion! So if you haven’t, take a look at it here! We need more far-out, creative supplements that push boundaries and genre-conventions!