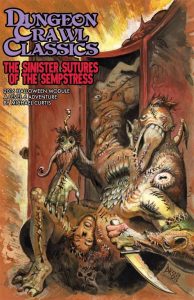 The second Halloween adventure for DCC clocks in at 22 pages, 1 page front cover, 1 page editorial, 2/3 of a page SRD, 1 page back cover, leaving us with 18 1/3 pages of content, so let’s take a look! It should be noted that this adventure is laid out in 6’’ by 9’’ (A5), which means you can fit up to 4 pages on a sheet of paper when printing this.

This review was requested and sponsored by one of my patreons.

Unlike the previous Halloween-module “They Served Brandolyn Red”, this one begins at the lofty level of 6. It is strongly suggested to have a well-rounded group of characters in order to survive this one. The module comes with plenty of read-aloud text and provides some guidance for conversations.

All right, only judges around? Great! So, the theme of Erblast, i.e. a form of inherited sin that is passed down through the generation, is a potent theme, and one that can have serious repercussions ina fantasy context. Turns out that, unbeknown to the PCs, some ancestors of theirs during the millennia have vanquished the eponymous Sempstress, an entity of pure horror. Said entity has trailed their bloodlines throughout the aeons…and now it’s time for the PCs to pay for the “sins” of their ancestors. And there is nowhere to hide.

Seriously. The module begins with the scene on the cover, where horrible amalgamations of flesh, stitched together in a grotesque para-life, shamble impossibly, from wardrobes, from drawers…any enclosed space, to attack. Hopefully surviving the assault by the horrific things, the PCs can investigate the respective furniture…and they *will* be able to enter drawers, for example – even if they’re too large to fit them. Closing the drawers sees the PCs transported to a nightmare realm of pulsing, stitched together planar fragments, bloated flesh…

Okay, we have to talk about an obvious inspiration here: the dungeon the PCs explore, the prison/fortress of the mighty Sempstress, is nothing short of a genius riff on Silent Hill’s Otherworld. Instead of aesthetics based on metal, rust and flesh, mirroring the dystopian industrial complex and related visions, this module instead takes a step back and basically transports the Otherworld concept one step back through time, tapping into cultural anxieties of stitched together corpses and the like. A strong Frankenstein angle, a realization of church-propaganda horror-scenarios, comes alive within this place, all while retaining the central leitmotif of fear of the flesh, of disfigurement, of bodily integrity.

Breaching the skin of the pulsing, organic and disgusting foyer, the first room of the “House of Tattered Remains”, drives that home from the get-go, with bodily fluids congealing into a twisted, disgusting thing. Quoting Tuzun Thune, windows to elsewhere may be found…and the monsters are so disturbing, they might as well have been taken from Silent Hill, Rule of Rose, or similar games: We have spiders puppeteering corpse-marionettes on an endless-seeming staircase. We have timekeepers that ask for a moment – and if the PCs answer in the affirmative, that’s just what they steal from their minds! Heck, these nasty buggers may strip an unlucky PC of all experience, reverting them to their humble beginnings! This is, difficulty-wise, one of the most brutal DCC-modules I’ve GMed, but it, like all good, hard modules, earns it: The monsters all have a trick (or two) that rewards clever players over high rolls: Observation, smarts and the like are just as important as PC-brawn here: The timekeepers, for example, have a pretty hefty Achilles’ heel; the spider-like spuppeteer-spiders can be noticed, etc. Traversing a bloody ballroom, finding a room where the PCs are threatened by regression to an infantile state, avoiding the sempstress’s scrying devices…the exploration of this nightmarish realm is just fantastic and evocative.

It should also be noted that a gigantic, horrid blob may well be the impetus for a TPK – the “Custodian of Parts”, erstwhile servant of the Sempstress, may actually be the best chance the PCs have to find something that will give them a much-needed angle against the deadly creature – provided the PCs play their cards right and don’t antagonize the…thing. They will need to find “The Bright” – which is somewhere in vats of eyeballs, slimy mucus, marrow…and here, the module becomes meta in an amazing way: It suggests peeled grapes, etc., the creation of an old-school “Halloween Feelbox”…and to have the players grasp for “The Bright”, hidden somewhere in the icky things. So turn of the lights, and have fun!

Did I mention that the metaphysical house’s attic contains animated flesh-dresses, gruesome perversions of the bridal gowns many of us have seen up there, collecting dust? And did I mention that the Sempstress is really tough, that players that don’t play their cards right, will die horribly in the finale? If they get to life that far.

You see, there is one more aspect about this module that I love: Do you know the kid-horror-movie Caroline? How it can be twisted and disturbing for parents and adults? That’s the final blending of ideas here: The transformative aspect. Instead of a mundane sanity engine, or using the corruption-engine, exploration of the house and fighting its denizens will put the PCs eye to eye with the Sempstress’s horrible power of “Unraveling” – they find tiny stitch-marks on their skin; clothing and body fuse, skin becomes translucent, one eye become a doll’s eye or a button-eye…their very presence herein not only subverts their sanity, it actually corrupts their bodily integrity, even when it comes to being…well, organic. And yes, many of these effects do have mechanical effects. When their bodily stability has been reduced to zero, they unravel, like a piece of abruptly unwoven cloth…for a fate that an enterprising judge will make most fearsome indeed!

Editing and formatting are very good, bordering on top-notch. The rules-language is super-tight, and I noticed no undue accumulation of glitches of a formal nature. Layout adheres to a 1-column b/w-standard with amazing and creepy artworks. The 2 pages of maps are beautiful, b/w,…and lack player-friendly versions, which is a big downside as far as I’m concerned. Pity that players won’t get to see it. The pdf comes with basic bookmarks – they could be more detailed.

Michael Curtis delivers in frickin’ spades in this adventure. The breakdown of physical borders and rules, courtesy of the nature of the dungeon, also provides a genius justification and carte blanche for an eclectic series of encounters that still makes sense; the different leitmotifs and themes blend together in an ingenious way that is greater than the sum of its parts: While the comparison to Silent Hill remains most apt in my book, it should be noted that the module has its own identity: Its blending of early/pre-industrial revolution anxieties, childhood fears and Otherworld (-ly) horror runs a the thin tightrope with panache aplomb, generating a vision that is slick, twisted and frankly glorious. I honestly wished that this had been a massive boxed set depicting a much larger realm, but one may dream of horrific realms for DCC, right? This adventure, in spite of its copious Appendix N/Sword & Sorcery quotes, which clearly designate it as having the DCC-style, actually achieves the goal of being a HORROR-module. It is so good, so resounding a success in its atmosphere and flavor, that I’d recommend it sans hesitation as a module that is amazing not only for DCC, but also for other rule-sets. The adventure deserves being experienced and played – in spite of its brevity and the lack of player-friendly maps, this gets 5 stars + seal of approval. It’s one of the best horror modules I’ve analyzed in the last couple of years. If you enjoy horror, don’t miss this short, but oh-so-sweet gold nugget of grimey, sewn-together, gory madness!

You can get this delightfully icky, amazing horror-module here on OBS!