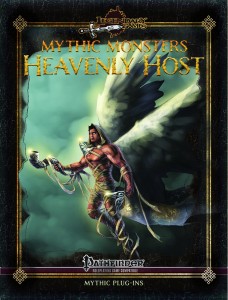 All right, as always, we begin this installment of the mythic monsters-series with supplemental material, which this time around, would be an array of 9 mythic feats – the first of which would be Sanctified Servant, a feat that denotes you as a servant to the forces of the high heavens, which serves as a gateway-feat that allows the character to from then on take (Sacred)-feats, including means for increasing healing, halos, using channel energy/lay on hands to add Purify Spell to item-based spell effects – which btw. translates to making the spell [good] and changing energy to 1/2 untyped, with evil targets having a harder time resisting this. At only +1 level cost, this one would be too strong sans the gateway-feat, so nice job there. Better SR versus evil effects and better sneak attack versus evil foes are solid, but overall, I wasn’t too blown away by these – they are nice and balanced, though.

We begin this supplement’s monsters with agathions, the CR 11/MR 4 avorals being the first – and from the get-go, you’ll notice something: They play differently than their non-mythic versions – radically so. As skirmishers, they can quickly disengage adversaries and withdraw with adversaries in tow, if need be!) and fire Toppling salvos of magic missiles…oh, and yes, dual attacks after moving. This makes the avoral actually excel at its target role – kudos!

The CR 18/MR 7 Cetceals may grant their regneration to others and create truly devastating fields of encroaching ice and unleash devastating spear-attacks that bypass immunities…ouch! Speaking of ouch – you thought that was brutal? The Cr 25/MR 10 draconal’s very presence erodes the personality of evil daring to rear its head in their presence. Lying similarly is nigh-impossible under the auspice of a draconal and their brutal claws can add vast amounts of damage to evil creatures. Fluid increase of SR and rebounding of magic upon the vile originators make this creature a true champion of the light. BRUTAL! (And you thought WotW’s regular final scenario was hard? Use these guys and see the evil PCs SQUIRM…oh, and yes, they can strip you of immunities…)

The CR 15/MR 6 leonal has a similar bonus damage array to melee attacks versus evil-doers, but is more focused on melee and teamwork, as befitting the nature of these leonine champions of goodness. Rendered in a surprisingly creepy full-color artwork at CR 3/MR 1, the Silvanshee is subject to a continuous nine lives and makes for a superb familiar for good spellcasters, including a gaseous form that retains the creature’s defensive properties. The CR 7/MR 3 vulpinal is all about bardic prowess, freedom and calming emotions – champions of the downtrodden and enslaved, these creatures may grant metamagic via mythic powers to allies.

Obviously, this book also contains angels and the astral deva (CR 17/MR 7) not only receives access to the powerful litany-spells, they may actually end challenges, judgments and the like and render the damage caused nonlethal…speaking of judgment: A scroll allows them to pronounce judgments. Pretty awesome build! The CR 3/MR 1 Cassisian receives a defensive aura and may use its powers to support allies, allowing them to roll two Will-saves and combine mythic surges with that. They also get a nice artwork.

At CR 15/MR 6, the monadic deva may use mythic power to unleash an anti-elemental/evil-creature burst and purge elementals and chain devastating morningstar attacks together. The CR 12/MR 5 movanic deva has an always-on bane and their purifying greatswords can unleash daylight via mythic power and sever the enslavement of animals, plants and undead. The CR 20/MR 8 Planetar can unleash flurries of razor-sharp feathers and actually unleash lethal wing buffets with all 4 wings and as celestial master strategists, these creatures may share teamwork feats among their allies. Oh, and their very flesh of emerald ice is anathema to evil. Awesome! Speaking of which: Arguably one of the most lethal creatures out there is the solar and the CR 28/MR 10 mythic version is so lethal, I can see theory-craft threads springing up on how to take them down. AC 56. Regen 15. Almost 500 Hp. DR 20/- (applies even against SPELLS, smites, etc!); exceedingly high SR, deadly SLs and spells, no-save dazzle aura (blind on failed saves), miss chances, immunities…oh, and spontaneous negation of negative levels, ability damage and mythic power-based negation of conditions…and know what? Offense is just as brutal. This may actually be one of the most deadly builds to have ever been printed for PFRPG – love it! These guys *WILL* put up a brutal fight against even the best of PCs!

Now, as always, we receive a new creature herein, which, this time around would be the CR 8/MR 3 Rhampholeal agathion – small bipedal chameleon-humanoids that not only look cute, but also kind of badass – and yes, they are superb infiltrators and foes of demon-kind and their abilities sport trickster path abilities. Nice to see stealthy scouts enter the ranks of the heavenly host, particularly with such a nice visual.

Jason Nelson, Jonathan H. Keith and Sean K Reynolds deliver in this installment: Much like devils, angels and agathions are determined by their hierarchies as well as by their alignment-axis: They need to excel at their respective areas of expertise and provide accordingly well-crafted, precise and lethal builds – and oh boy does this deliver!

The forces of goodness need to be fearsome and the creatures herein deliver in spades. Better yet, where some base creatures were mostly defined by their SPs, they now have their distinct, unique tricks that render them an integral part of heaven’s armed forces. No admittedly, compared to some creatures in the series, the new critter herein didn’t blow me away, but the builds overall can be considered to be truly astounding and even this nitpick regarding the execution does not rattle the awesomeness of the idea of a celestial chameleon humanoid. Come on – that’s truly cool! All in all, this is an inspired addition to the series, well worth 5 stars + seal of approval.

You can get this cool installment in the series here on OBS and here on d20pfsrd.com’s shop!