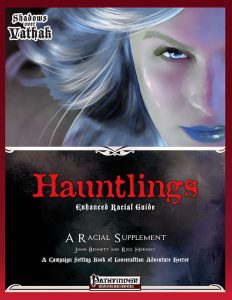 The second enhanced racial guide for the Shadows Over Vathak setting clocks in at 40 pages, 1 page front cover, 1 page editorial, 1 page ToC, 2 pages of SRD, 1 page back cover, leaving us with 34 pages of content, so let’s take a look!

All right, hauntlings are easily one of my favorite races of Shadows Over Vathak, and after a brief introductory text, we get information on the race in general, then regarding races and their take on religion, nomenclature, etc. – in case you did not know, these fellows are basically those touched by spirits. And yes, we get an age, height and weight table. Hauntlings get +2 to an ability score of their choice and are Medium creatures with normal speed. Hauntlings are half-undead and thus gain darkvision 60 ft. as well as a +2 racial bonus to saves versus diseases and mind-affecting effects. They take no penalties from energy drain, but can be killed by it. They shrug such negative levels off automatically after 24 hours, though. They are harmed by positive and healed by negative energy as a strong drawback for this, though. They have memories of past lives and thus may choose two Knowledge skills, treating them as class skills and gaining a +2 bonus in them. They also add +1 to the DC of spells of the phantasm subschool they cast and hauntlings with Charisma 11+ gain ghost sound, pass without trace and ventriloquism as SPs.

There is a metric ton of alternate racial traits that sport an actually narrative-wise relevant tie in regarding the unique flavor of the race: A hauntling with faint memories of dying in a fire, for example, may mean you replace the phantasm DC-increase and SPs with burning hands and spark 1/day. Similarly, accidental deaths may result in hauntlings with different SPs. Instead of the Knowledge buffs, hauntlings can perhaps really impersonate a previous identity exceedingly well, and there is an option to 1/day, as an immediate action, treat positive energy and negative energy as usual for 1 minute. Having been drowned may result in a swim speed and the ghostly magic may be replaced for a frightening 1/day rictus grin that is properly codified, with DC scaling. What about generating a mist that can obscure even darkvision or auto-stabilizing after dropping to 0 hp? Remembering weapon training? Or a potent trick to become incorporeal for brief stints? Yeah, these alternate racial traits are not only precise and tight, they are AMAZING and flavorful.

We also get full-blown, distinct racial variants that are more than just a combination of alternate racial traits: Caoineadhs, for example, get +2 Dec and Cha, -2 Con and can emit a frightening howl once per day, with a full-round action and a scaling. They also get their own SPs. Cha-governed save DC. Gan Ceans get +2 to one ability score of their choice and are…HEADLESS. I kid you not. You can attach e.g. a skull of the like. The original head does exist, btw., and makes for a unique adventuring option, for retrieving it can result into a transformation. They also get their own SPs. Shadowlings get +2 Dex and Wis, -2 Strength and treat Stealth as a class kill, gaining a +2 racial bonus in it. They also get two neat SPs and enhance shadow-spells. Wraithlings get +2 Con and Cha, -2 Wisdom and have a 1/day Con-draining touch, with a Con-based scaling save to negate. Once more, unique SPs provided. I have no balance-concerns with any of these.

The favored class option array is MASSIVE and provides flavor as well as benefits for them, contextualizing what they represent in-game. Really cool. These include all Paizo-classes minus the ninja and samurai, but including ACG & OA classes and even the vigilante. No issues here and even fortune teller and reanimator are included.

The pdf also includes 4 racial archetype: The dirge caller bard replaces fascinate with an ennui-inducing debuff and expanded necromancy spells instead of inspire competence. Soothing tune is replaces with a bardic performance-powered phantasmal killer. Loremaster is replaces with an improved speak with dead. Nice archetype! The ghostly gunner gunslinger swaps out the quick clear, startling shot and expert loading deeds in favor of having ghostly firearms float around her. How cool is that?? The archetype lets you move these and fire unattended guns, even if they’re not loaded! The archetype can increase the number of floating firearms by +1 instead of taking a bonus feat. This archetype is mechanically deceptively simple, but in fact precise and awesome. The section also sports two different slayer-archetypes, the first of which would be ghost hunter slayer, who is a specialist in slaying incorporeal targets. They can only apply studied target against incorporeal creatures and their weapons are considered to be ghost touch (not italicized properly). They also get automatic Perception checks to notice targets and become experts at quickly and efficiently using holy water. At higher levels, they can bestow final death to spirits and trap them in containers. The archetype comes with a list of suggested slayer talents. The second slayer archetype are the grim harvesters, harvesters and grim judges that can see death, attune a bonded weapon and, at higher levels, generate a circle of death. The capstone lets them pronounce a dire fate for a target which will then come to pass. The archetype btw. rewards choices of weapons like scythes, without penalizing other choices. Flavorful and cool!

The pdf also includes 8 different feats: Floating Presence nets you a balanced floating option; Phantasms and Major Phantasm nets silent images and worse, which exist only for one target – perfect gaslighting/horror device. They can also be made to render yourself invisible to the target via Selective Apparition. Steal Memory lets you claim the skills of those you’ve slain (amazing), and yes, it is limited and restricted properly. Better social skills vs. ghosts and the option to affect more targets with Phantasms and make them spread – I adore these feats here. Full of roleplaying potential for smart players, the feats are precise and unique. Now, I absolutely ADORE the notion of Vathak’s Lineage feats: Unlike corruptions, they allow the PC to properly play the descent into becoming a monster while retaining balance and without being overly punitive. As such, I was ecstatic to see the concept explained here once more (should you have missed SoV’s Lineage-concept so far) and get a proper Spirit Lineage, with no less than 9 options to choose from and 3 general levels of taint. These are potent and amazing. Love them.

The pdf also includes a TON of race traits. These are superb examples of what traits should be: Mechanical effects are correctly codified and types AND we get actually narratively-relevant ones! For example, there is one that nets you the following: “Once per day, you can clear your mind and know where the most recently deceased humanoid creature is and where the largest graveyard is. Both have a range of one mile.“ Come on, that trait offers a variety of cool character concepts on its own! How often can you say that about a frickin’ TRAIT? What about having a ghostly phantom limb? It does not really exist, having no slots, but it *can* affect spirits! This is amazing! It lets you play bad-ass disabled person, something we only very, very rarely get to do!

Beynd these damn cool traits, we also get mundane equipment: Holy ash. Cremation ash that can open your eyes to spirits. Salt to make your armor apply versus incorporeal targets…Really cool, and yes, comes with Craft DCs. There also are 5 new weapons, including a flail that can generate an eerie sound, a disguised rhompia and war scythes. The pdf also provides the new corpse hair material, tapping into classic myth and providing a wide variety of applications for the material. Ghost glass and spirit coal are also presented, making this chapter a winner!

There are 4 magic items, which include dead man’s tongues, which can animate the dead and fortify the half-undead. Funerary shrouds conceal the target from mindless undead and can absorb one energy drain. Funerary urns let you entrap the slain, preventing their return. Tombstone hammers are just what they sound like. Come on, you want to smash the undead while wielding a tombstone hammer! You know you do! Particularly since the names of your foes may show up on the stone…which is not good for morale… There are 7 new spells included as well: Cold spot is a thematically fitting low-level soft terrain control that also makes the unseen visible; ghostly light is an upgrade of light that also detects spirits. Murder of crows generates a damaging area that also can blind targets and that may be moved. Release from pain rots slowly away the flesh of the living, turning them into skeletons under your control. Tear the void creates a negative energy vortex that can be moved. Through the eyes of the dead lets you imbue a skull to watch through it. Tolling bell destroys weak, mindless undead. Minor complaint: There is no such thing as holy damage in PFRPG Dear lord, I love these spells! Their levels and classes make sense. They are evocative and relevant for their levels. The pdf also includes a new occult ritual, namely Last Chance. This nets you a safety net as an undead on a success and makes for a cool and potent ritual.

The pdf closes with an amazing dressing table of random hauntling features.

Editing and formatting are superb on a formal level and almost perfect on a rules-language level. I noticed only a very minor hiccup: Lucus Palosaari and Landon Winkler did a phenomenal job here. Layout adheres to a drop-dead gorgeous two-column full-color standard and the pdf sports fantastic full-color artwork, original pieces, mind you. The pdf is fully bookmarked, but the first chapter’s bookmarks are a bit wonky.

John Bennett’s development of Rick Hershey’s original hauntling concept is one of the single most inspiring racial guides available for PFRPG. The options are meticulously balanced to work in both more high-powered and grittier games. More importantly, we get no feature bloat and instead opt to focus on story-telling. Heck, even usually bland, min-maxy rules-components like traits and favored class options are inspiring and matter! Favored class options have flavor. You can play HEADLESS FOLKS. You can gaslight folks with selective illusions. This is phenomenal.

This is a truly fantastic, glorious racial guide that makes the hauntlings one of my favorite races in all of PFRPG! I mean, you can play balanced, headless folks! You can have a good reason to play a one-armed character! From items to options to feats, this breathes care, passion and love – this supplement is inspiring in all the right ways. This is a perfect example of what a racial guide should be. 5 stars + seal of approval. Oh, and since I really love this one, it is hereby nominated as a candidate for my Top Ten of 2017.