Shadows over Riverton I: A Page of Scrolls

Shadows over Riverton I: A Page of Scrolls 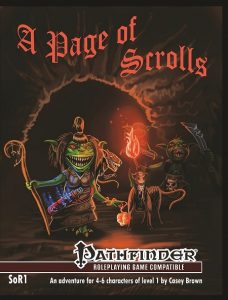 This first module in the Shadows over Riverton AP clocks in at 34 pages, 1 page front cover, 1 page SRD, 1 page back cover, 1 page editorial, leaving us with 30 pages of content, so let’s take a look!

This adventure was moved up in my reviewing-queue due to me receiving a print copy in exchange for a critical and unbiased review.

Wait: Before we do dive into the SPOILERS, let me make something very clear. Are you interested in Greyhawk’s bandit kingdoms? Well, if you’ve been following my homepage, you’ll notice how last Friday, I reviewed basically the unofficial chronicles of the Bandit Kingdoms, right? Right. Note how I enjoyed the sentiments there, the style and everything? How I wished that this institution was still around, that I could play in it? Well, the Living Greyhawk campaign may be gone, but this module, in themes and presentation, very much breathes the spirit of the bandit kingdoms, if not, obviously, the IP. This does mean a couple of things: For one, there is a more than pronounced level of detail available here, with footnotes helping with less common rules, concise use of skills and DCs – the presentation does show the experience of author Casey Brown in the harsh realities of living campaigns – and yes, this includes notes to scale challenges to higher APLs. This level of detail, and this is very important for the potential buyer to know, extends to the eponymous town of Riverton as depicted herein: Apart from the map and the handout, the pdf has no less than 7 pages devoted to Riverton -and the city’s details are truly captivating.

Without spoiling anything, here’s basically the gist: 18 years ago, The Bastard, a powerful cambion, gathered an army of humanoids and, via the support of shadow demons as assassins, managed to take Riverton and subject it to his brutal yoke. The people did not let that stand, however – they slowly, but surely eliminated the powerful abyssal assassins and then, civil war erupted and Riverton’s champions managed to drive The Bastard and his servants from the town. However, a significant population of humanoids remained, which is probably one of the reasons Riverton, to this day, is governed by a Plar – “Someone who rules over a motley group.” Beyond the racial tensions between the more monstrous humanoids and the general populace, recent weeks have brought dire warnings and refugees from the North streaming to Riverton, further adding tinder to the explosive cocktail brewing. If that does sound interesting, you’ll be happy to hear that Riverton’s depiction in its details goes one step beyond what just about every sourcebook does: We get full-blown settlement statblocks and write-ups for not only Riverton, but also beggartown, the somewhat remote harbor town-quarter and the respective districts (!!!), overall generating a truly compelling backdrop, which, in style, presentation and theme would work perfectly with just about every Frog God Games or Raging Swan Press-supplement in theme and style.

So yes, this, theme-wise, pretty much represents the best of Greyhawk-aesthetics. This does extend to creatures though: Goblins are e.g. not illiterate here and the revised background stories and flavor assumed for Golarion does not necessarily hold true within these pages. Which brings me full circle around to the unofficial bandit kingdom summary I mentioned before. In case you haven’t noticed: This pdf, in its spirit, detail and style, very much can be considered the heir to the Bandit Kingdoms aesthetics and flavor. Having read the guide, it is very hard to divorce the module’s premise from this heritage; you see, the section that amounts to a mini campaign setting with Riverton and its environments reverberates with the stories of the bandit kingdoms to an exceedingly pronounced degree – it feels like the sequel the narrative was always supposed to have.

Okay, this is as far as I can go without resorting to SPOILERS. Potential players should jump to the conclusion.

All right, only GMs here? We begin with an establishing shot, as the PCs make their way towards the gates of Riverton, towards Flaneur’s gate, where access to the city can be gained; against a backdrop of refugees and yes, slavers, the PCs will have a taste of the frontier spirit and rough and tumble mindset beyond the borders, as they can save Stafania Wunderlich Homeagain, a halfling associated with the prominent Homeagain family, from slavers. The level of detail employed here is stunning and something you usually only see in modules by Raging Swan Press or 4 Dollar Dungeons – whether via combat or Intimidation, the pdf is not content in simply resolving the task with a skill check, but takes roleplaying and decisions as well as circumstances into account, extending this care to the consequences of the encounter as well. Beyond this intermezzo, the PCs will also have an easy means of bypassing the notorious anti-elven orc-captain Llerdnirg, who far exceeds the PCs in capability – probably with the help of one Ahren, a clumsy diviner in the employ of the local wizard’s college. Pcs that understand Orcish may actually be rewarded with additional read-aloud text, to give you another example for the commendable level of care employed here.

Having entered the city, it is also Ahren that tries to recruit the PCs for a specific task: You see, the clumsy diviner has lost a scroll, which has fallen into the canalization under Riverton, a place that is the home of quite a few unpleasant folks. It is here that the brief mini-dungeon episode begins, as the PCs climb down into the canals to retrieve the scroll. The canals as such extend the level of detail employed for the social encounters above ground to the terrain and encounter with both intelligent and nonintelligent adversaries, providing a diverse set of challenges and including means for nonviolent conflict resolution, tough as those may be.

So yeah, while you may well roll your eyes at a sewer level, it actually is a well-crafted one, with a handy GM-reference for underwater combat being included in the deal. Beyond that, it should be mentioned that, while CR-appropriate, this is no hand-holding exercise: There are ample harder modules out there, but PCs unwilling to act and fight smart will be tested to their limits if Fortuna does not favor them. The brief sojourn into the stinking and infectious depths does end with some interesting loose ends: Hints towards a conspiracy/slaver-ring and the very nature of the scroll – blood biography – render the potential for future developments more than pronounced, particularly since the PCs will have had their first taste of the sunken remnants of former ages of Riverton below the surface…and since they may have made a tenuous alliance with goblins…or eradicated them completely. The overall sense with which this pdf leaves you is one of baited anticipation – much like a good establishing shot/first module, this seeds a lot of hooks and potential and provides a fascinating vista for further developments and already points towards a serious array of potential consequences for the actions of the PCs. The pdf also sports a new spell that lets you detect hidden writing and the scroll case in question is actually a new magic item.

Editing and formatting are superb – I noticed not a single glitch. Layout adheres to a clean two-column full-color standard with the pages sporting a yellowish used parchment look. The artworks are serviceable and the full-color map is neat as well, though we do not get a player-friendly map to cut up and present to the players. I hope that future installments of the series will sport a map of Riverton, but for the purpose of this module, it is not (yet) required and therefore absent. The pdf has no bookmarks, which constitutes a nasty comfort detriment. The print version is thus preferable and can be considered to be a nice, solid softcover.

Casey Brown’s “A Page of Scrolls” is an establishing shot of a module: It establishes a tone, connections and challenges, a specific design approach and does so with flying colors. The flair and atmosphere evoked are superb and captivating, particularly for those of us even remotely familiar with the bandit kingdoms, to which this is a predecessor in anything but closed IP. That being said, as much as I adore the flavor and design approach, the level of detail and care, this module ultimately remains just that – the establishing shot. If you take the level of detail, the atmosphere and the setting up away and look at this on its own, it loses some of its appeal due to the overall brevity of the module. The easiest means of understanding what this is would be to simply picture this as an excellent first part in a multi-part organized play saga, with some excellent gazetteer-style information added. As such, the module feels a bit lacking in its resolution, but does so by design. In the end, this made me exceedingly excited to see where the saga will go from here, but also left me somewhat dissatisfied regarding cliffhangers or first, pronounced consequence, instead just hinting at the things to come.

It is thus, that I arrive at a final verdict of 4 stars, with the explicit note that I can’t wait to see where this series will go.

You can get this neat module here on OBS and here on d20pfsrd.com’s shop!

Want to grab the bundle with the bandit kingdom guide? You can get that here!