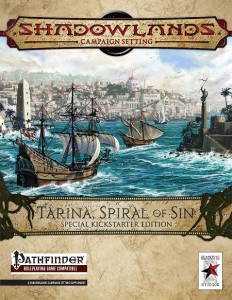 Wait, what? Well, it’s arguably been a while and this book has slipped somewhat between the cracks of my reviewing folder, but let’s recapitulate, all right? Beyond being the setting of the Gates of Tarina-adventure, the eponymous city is an important jigsaw piece in the panorama of the Shadowlands, also known as Sæmyyr.

The world of Sæmyyr’s ambition is rather significant, to say the least: The basic idea lies in a fantasy-realism: Magic is based on nigh-unknowable level of technology (though players will probably never find that out) and Gygaxian realism is another key tenet for the setting. Basically, shadowlands takes the old adage of advanced technology being indistinguishable from magic (look at your smart-phone and doubt that one’s veracity…) and applies it consistently to a huge planet. The result is surprisingly interesting, for the basic premise, consequently, results in magic behaving slightly differently, being treated differently – since the set-up implies a certain level of consistency you’d only see in hard scifi, the result feels surprisingly organic…feasible. This is coupled with a take on fantasy usually not seen elsewhere: Namely, that of a quasi-Roman empire that is, in fact, more developed than traditional Middle Age-based fantasy. Coupled with aforementioned take on magic and have a setting that feels not only novel, but also consistent. And yes, this is enhanced by the massive map of the city: Tarina’s map looks like a satellite map taken straight from Google Sæmyyr.

But enough, you want to know what’s in this book, right? Well, we begin our trip to Tarina with several pages depicting an immersive, well-written short-story that portrays life in this metropolis before taking a glimpse at relationship demographics, including racial subtypes and sub-species – instead of bogging the game down with alternate stats for each of the classic races, these entries are based mostly on the captivating and well-presented fluff, with respective entries featuring information on nomenclature, personality and the like. Now usually, this can end up being pretty bland, though not in this book – the write-up is captivating and diverse and actually, and this will be true for the whole book, a pleasure to read.

However, at the same time, one can see the relative (then) inexperience of the designers – a little sidebox provides additional racial powers that are supernatural abilities – sans codifying them properly as either alternate racial traits or as race traits – instead, they seem to represent modifications of the base racial stats – which is fine with me, but would need to be explicitly stated to avoid confusion. Design-wise, they tend to be solid and feature scaling mechanisms for daily uses and DCs where applicable, though one in particular is just bad design: Ghost Hammer. Dwarves (here called Durinn) with this power call upon ancestral spirits to provide minor +2 atk or AC bonuses in combat…in the most convoluted way I can imagine. Each round, at the character’s turn, sans expending an action, the character may perform an attack based on BAB and Wis-mod versus AC 10, the bonus lasting 1d4+Wis-score. The ability fails to specify whether both bonuses can be granted by subsequent uses; the bonuses are untyped…and I don’t get, at all, why the ability requires the time-consuming attack in the first place. It’s just die-rolling for the sake of die-rolling sans justifiable benefit.

Thankfully, the book quickly focuses again on more interesting components – the means by which classes are codified and assigned culturally relevant places in the framework of Sæmyyr enhances the sense of immersion featured in this book – the very fact that magic is nigh-monopolized by the Brotherhood, for example, is certainly a relevant factor in global and local politics. On the positive end, the pdf does sport a number of unique traits that help root characters in Tarina – and here, the pdf manages to provide the required precision.

Tarina is a conquered city and the majority of this book is, obviously, devoted to this metropolis – its crime families, its occupying force, its politics and unique places. The general depiction of this city is ultimately hard to capture properly in a review sans quoting passages upon passages of material from within – suffice to say, the quality of the prose here is high – unlike many similar supplements, I found myself reading this supplement without an internal wish to skip ahead. The portrayal of the metropolis of Tarina is an excellent example of what good writing can make or break a supplement – the numbers and nomenclature are important, sure, but this one’s writing is what it makes captivating. This level of quality extends to the write-up of the organizations and the visuals provided for them are great – though, once again, the crunch falls somewhat flat of the imaginative potential of the fluff: The Knights of Kashouli, for example, can take a feat that allows them to 1/day, as a swift action, heal twice Wis-mod Hp. Yeah, let’s go ahead and spend a feat on that. Yeah, you read right – no scaling of uses or increasing healing. Urgh. Similarly, the 5-level PrC for the knights is pretty much the definition of mechanically bland – some minor talents, better Knowledge, Diehard and finally, +1 Int or Wis as a capstone. You may not properly grasp this, but in view of how good the fluff is, this is jarring.

Now noted, the authors can actually create solid mechanics – particularly the magic-rules that take into account the specifics of Sæmyyr are interesting – non-brotherhood members are subject to flux-rolls when casting – these can provide critical/maximum effects to spells and the like, minimal effects and have a chance of forcing a roll on the rifts of insanity table, providing a complex and surprisingly concise system – granted, not one for every game, but mechanically it is interesting – though the damage-maximization/minimization will make magic and psionics ultimately more swingy. It should also be noted that, while the presentation is concise, a short explanation text would have made the flux-table and the rifts-mechanic associated with it more user-friendly. The aforementioned brotherhood caster class is also provided and can be considered to be a variant full caster with some flavorful order abilities (which work akin to cavalier orders – they offer a linear progression of abilities) and the class also provides titles for the respective levels (and the color of the eyes of these casters) – flavor-wise, this is a well-crafted class, though the omission of pluses in the table remains an obvious formatting glitch that should have been caught in editing. Still, flavorwise, this class is awesome and inspired – though I wished more than 2 of the sample orders were provided.

The next chapter deals with the power players of Tarina and their interaction with the respective PCs, providing a vast, inspired tapestry of adventure ideas galore and further insight into the intricately woven tapestry of Tarina.

Editing and formatting are good – on the one hand, formally, the editing is pretty awesome, though the depiction of the rules-components herein is simply less refined – a good developer/rules-editor would have helped here. Layout adheres to a beautiful two-column full-color standard and the book sports extremely awesome Paizo-level quality artworks and excellent cartography – this book is BEAUTIFUL. On the downside, the electronic version has no bookmarks, which represents a massive comfort detriment. This review was written by using mainly the print edition of this book, which was kindly donated to me by a friend and reader – the full-color KS-print is absolutely gorgeous and well worth getting.

Chris Merwin, Stephen Michael DiPesa and Jaye Sonia have created one truly astounding city herein – and, quite frankly, I shouldn’t like Tarina as much as I actually do. There are quite a few rough edges in the crunch and some material that is flavor-wise awesome, but crunch-wise falls flat. Similarly, you won’t find a settlement statblock for Tarina herein. I really shouldn’t like this to that extent…but Tarina MAKES SENSE. One can clearly see the work of academics, of smart people that understand how culture, politics, society and the like work – and who manage to actually convey this knowledge and apply it. Tarina feels incredibly alive to me, chock-full of potential.

Similarly, this may be a detailed, very detailed setting, but one that does not drown in micro-management, walking the perfect balance between detail and high-concept: Whether you’re interested in the big picture or in the small, Tarina delivers in spades and makes me anticipate the long-delayed campaign setting even more. How to rate this, then? This is kind of difficult – you see, if you’re getting this for rules, then you’ll probably be disappointed. But if you’re getting this for the writing, for reading pleasure and inspiration, as a means of looking at a fascinating world I actually REALLY would love to play in, then this may well be an excellent investment. Still, with the minor flaws, I can’t rate this as highly as I’d like to. The print version does receive a final verdict of 4.5 stars from me; If you’re getting the electronic version, detract a star for the bookmark-issue, though if you even remotely have a thing for well-crafted cities and cultures, I’d suggest rounding up even then. My final verdict will hence clock in at 4.5 stars, rounded down to 4 for the purpose of this platform.

You can get this well-written, captivating source-book here on OBS!
Endzeitgeist out.