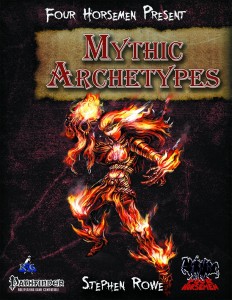 This installment of the Four Horsemen Present-series clocks in at 11 pages, 1 page front cover, 1 page editorial, 1 page SRD, leaving us with 8 pages of content, so let’s take a look!

So, what are mythic archetypes? Well, the short and simple response is that they represent different foci for mythic characters – archetypes before paths, if you will. Instead of modifying mythic paths (and jumping straight into a huge hornet’s nest, considering how intricate the diverse expansions for them out there are), the archetypes herein replace e.g. hard to kill, amazing initiative, recuperation and unstoppable – basically, you switch out the basic abilities gained by every mythic hero. For your convenience’s sake (and due to not all archetypes replacing the same abilities, each of the respective archetypes in this book still notes which ability replaces which – kudos for adhering to rules-language standards there!

All right, so what do we get herein? Well, the first archetype would be the Adaptable Hero -exposed to some strange artifacts or spawn of an unearthly bloodline, this archetype is defined by adaptability (D’UH) as a survival-strategy – as such, SP disguise self that is harder to dispel, skill-boosts, quick retraining of feats that render them wildcard and, at 8th tier, at-will greater polymorph capture this one’s focus pretty well – and seem like a valid trade-off for the basic mythic defensive abilities.

The Celestial Hero receives a mythic power-based protective aura, learns more mythic conjuration [healing] spells (be sure to check out LG’s Mythic Magic-series to broaden your options) and may grant temporary hit points via the expenditure of mythic power by touch – interesting here: That can be combined with regular healing. And yes, paladin lay on hands, channel etc. is covered. Later tiers provide Cha-bonus (or tier) to saves, meaning you can get exceedingly good saves – particularly paladins, since the benefits stack, can get ridiculous saves thus – not a fan there, even though it replaces mythic saving throws. Finally, the archetype adds a brutal penalizing effect to the aura. All in all solid, if a bit heavy on numerical escalation for my tastes. This would btw. also be as good a place as any to note that layout/formatting is wonky in this pdf: There are quite a few abilities herein that have their whole text bolded for no discernible reason, which does not render them any less functional, but which is aesthetically somewhat jarring.

The Commanding Hero has design-wise some interesting choices, to be precise, it has abilities that reward maintaining the full complement of mythic powers. Ability-wise, being a stellar face and significant expansions of aid another in versatility and efficiency are coupled with 9th tier losing immortality – but also allowing the hero to bestow mortality upon foes, which at tier 10 even extends to demon lords and similar beings! Suddenly the foes have a reason to target the commander destined to defeat them – love this design-decision!

The Elemental Hero elicited the obligatory “oh, elemental – how novel”-sigh from me – apologies to all fans of the theme. That being said, you choose an element and receive better mythic spell access for spells with the associated descriptor (again, get the Mythic Magic-series for a wider selection) as well as the obligatory associated resistance. Each of the elements also comes with an elemental form that has several tier-based bonuses that can be considered to be BRUTAL: Hardness for earth, concealment (though technically, that should probably be concealment miss chance, since concealment is pretty much defined at 20%, not 5% per tier, but I digress and nitpick unduly here) for air…over all, I liked these benefits in their mechanical execution, even though the theme feels tired to me at this point.

The Ethereal Hero may freely target ethereal creatures and my mythic power-based perform immediate action blinks and gets one AWESOME ability at 6th tier: No gravity aura coupled with flight speed. Glorious! The high-level ability allows for pretty free shifting between material and ethereal plane – see, this one is tactical, it’s unique, short, to the point and evocative. Can you see the legendary burglar with these tricks? I know I can. Awesome!

The Fiendish Hero would pretty much be the evil pendant to the Celestial Hero, though he does receive different bonuses, namely attribute-enhancement and gets a surprisingly brutal blaze of glory ability: The fiendish hero may take negative levels (which bypass any immunity) instead of expending mythic power. This is insanely strong and quite frankly, delimits the one component of mythic rules that keep them in check. This is not happening near my game. Mythic power-based charm monster of fiends is solid. 7th tier allows for the expenditure of one mythic power to grant a +6 profane bonus to an ability score as well as Mythic Companion as a bonus feat to a willing target – ending the pact causes 2d6 Cha drain sans save and the hero can have tier such pacts active at a given time. Again, rather brutal, considering the significant power the companions bestow. While I liked several ideas here, I will not use this one in my games.

The Mortal Hero is a jack-of-all-trades with equipment, armor and weapons and may quickly learn to use them superbly (skill bonuses and gained proficiencies) and may further enhance mythic surges via mythic power and escalate this via more expenditure of mythic power further. I am not a fan of this, since it makes math-wise impossible tasks possible at CRs and tiers where that is not intended. 5th tier nets universal immunity to mind-affecting effects and freedom of movement, even pertaining mythic spells and effects. Again, I’m not sold on this one.

The Shadow Hero once again benefits from having all mythic power to significantly increase the use of traditional thieving skills with illusions, see in darkness and use Stealth while being observed, courtesy of mythic power expenditure. Glamer-based “immunity” to all weapons (watch them gawk…) is awesome and full recuperation as soon as 3rd tier may be strong, but requires darkness. 5th tier nets a double-edged sword – bonuses/penalties that run the gamut from -4 to +6, depending on lighting conditions – and yes, the most significant bonuses penalties are reserved for mythic daylight/darkness.

The final archetype herein would be the Undying Hero – who either gains negative HP when undead or a significant array of immunities when alive. The immunities are excessive and pretty much in line with the undead- personally, I’m not a fan of this at first tier. Why not introduce a choose-your-immunity based on tier? Would be less front-end heavy… 3rd tier nets mythic power-based fast healing (or an upgrade thereof, if you already have it) and 5th tier allows for the healing via both positive and negative energy, constituting a unique benefit.

Editing is top-notch, though the bolding glitches herein are jarring and imho should have been caught. Layout adheres to Rogue Genius Games’ two-column full-color standard and the pdf sports numerous nice full-color stock artworks. The pdf comes fully bookmarked for your convenience.

Stephen Rowe’s mythic archetypes are innovation-wise awesome – taking the design-paradigm of general archetypes and applying them to mythic rules is pretty much a brilliant idea I really enjoy. In fact, several of the archetypes herein sport interesting decisions, even though concept-wise, many cover classic tropes. In particularly the Commanding hero, Shadow Hero and Ethereal hero feel balanced, versatile and unique to me – I literally came up with ideas for such characters while reading them. At the same time, this pdf’s archetypes do something I am exceedingly weary of in some cases – namely, numerical escalation. You see, mythic’s main problem can be found in exactly such numerical escalations – sans fixes, they can quite frankly make the game reach the somewhat problematic echelons – but I’ve commented on those components in my review of Mythic Solutions.

Basically, this is a pdf that has some inspired bits and pieces and some components that require some care when implementing them. Still, the innovation weighs more heavy for me than the annoying formatting hiccups and escalation-issues and thus, my final verdict will clock in at 3.5 stars, rounded up to 4 for the purpose of this platform

You can get this nice, if not always perfect pdf here on OBS and here on d20pfsrd.com’s shop!