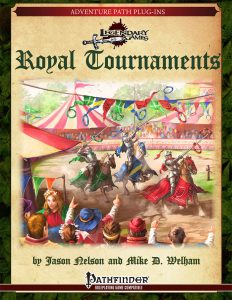 This supplement clocks in at 44 pages, 1 page front cover, 1 page inside of front cover, 1 page editorial, 1 page SRD, 2 pages of introduction, 1 page ToC, 1 page advertisement, 1 page back cover, leaving us with 35 pages of content, which, as always with Legendary Games, manages to cram quite a lot of text on each page, so let’s take a look!

It is an interesting observation for serious students of history, whether professional or amateur, when one discovers the extent to which religious and regular festivals have shaped the course of life for literally thousands of years; while we tend to glamorize the iconic knight tournaments and jousting, the fact is that both combat challenges and religious festivals have had a huge impact on daily life in ages past, perhaps to an extent that surpasses what we nowadays can experience in festivals and the like. Religious festivals in particular have shaped the experience of the middle ages to a much more significant degree than most folks realize.

It is interesting to note, then, that tournaments and the like, as important as they are, only rarely feature prominently within the context of roleplaying games. While I do know of a few modules featuring festivals as backdrops, there isn’t that much material out there to create them yourself. This pdf, which should come as no surprise, seeks to remedy that. We begin by establishing festival size and mechanical impacts of these on the game – whether it’s the GP-limit or, if you’re using Ultimate Rulership (which you should!), the basics are provided in detail. If you don’t have the festival edict rules from that book, fret not, btw. – they are included in the back.

The pdf provides the rules for navigating the throng of the crowds and finding particular locales next – and these take cost of living status into account: rich folks have an easier time finding exclusive places.

Tournaments are more than entertainment, though, and indeed were a place of politicking, where fortunes could be made or lost – as such, the pdf provides synergy with various subsystems from honor to relationships, without necessarily requiring them. The right seating and lodging can make a difference on the localized fame or infamy the PCs have; this value is known as renown and based on honor or reputation, with the starting value being the sum, divided by 10. Big plus: In the absence of these subsystems, there is another way to calculate this value – you can use them all in conjunction, but you don’t have to! Using magic to create illusory splendor, winning the “king of the hill” spot in the lottery and the like are all discussed.

In advertisement, there is the saying that promotion’s everything – and this held true back in the day as well, with 5 sample promotions and associated skills and special effects accounted for. The pdf also discusses differences in magic saturation – how a gritty, low-fantasy foot-race may well become a teleportation-contest in a high-fantasy game, for example – it’s nice to see such concerns spelled out. Speaking of which: For as long as there have been games of chance and contests, there have been attempts to cheat. The supplement proceeds to discuss on how to quickly and easily assert attitudes towards cheating, and using background checks in conjunction with the fair is similarly discussed.

These basics out of the way, we move on to the section aptly titled “Rural Delights” – here, we are introduced to 5 minigames, ranging from caterpillar eating, rope swing and jump to squirrel racing and whittling. These have in common that their rules are tightly presented, easy to grasp…and the contests are quickly resolved, preventing boredom at the table. Furthermore, we get two potential complications per such contest. Obviously, eating and drinking contests as well as jumping events have been included as well, though these do get their own dedicated sections, differentiating between different contests within. The racing event section also deserves special mention, with sprints, endurance races, relays, steeple chases and riding or swimming races covered in detail. A minor note of complaint: It would have been awesome to see a flying race rule-array as well, though it’s easy enough to extrapolate from the concisely-presented rules here.

Tests of strength, from Scottish caber tossing, distance throwing, tug-o-war, weightlifting – quite impressive array, with simple and quick to play rules. The pdf also features rules for mock battles (performance combat synergy provided): We get easy to grasp jousting rules that take actual mounted combat prowess into account (yep, those fellows will be better than characters who don’t have feats pertaining mounted combat), and resolution is explained in a tight manner. The special considerations of fantastic settings are taken into account, mentioning the potential for vertical jousts or aquatic or aerial variants. 7 sample competitors are provided for the GM here. Target shooting and unarmed combat events are presented in a similarly tight manner: The latter actually provides rules for boxing, wrestling and even sumo! Scoring is noted and the respective unarmed combats actually have a strategic element: In a boxing match, it makes a difference whether you try for a combination or a head butt. As an interesting note: I can see these rules fitting regular unarmed combat just as well, making that aspect of the game more interesting.

Speaking of which: if that sounded to mundane for your tastes: What about a variety of distinctly fantastic minigames/festival events? The pillars of life and death is about using positive and negative energy to capture pillars conductive to these energy forms! I can see this work great as a means in a neutral (or sufficiently cosmopolitan) society to deal with disputes between churches, for example – sample contestants and cheating methods are provided, fyi. Magical shooting galleries with magic-powered wind, hacking through logs as fast as possible or fighting magical creatures in a kind of illusion-powered endurance combat are provided as well. What about retrieving gems from a 60 ft. pole…or the half-fiendish nightmare assassin who relishes in humiliating would-be jousters, ruining their reputation before killing them? (Yep, the latter comes with full stats, and sample competitors are provided for the contests, where applicable.) The pdf then ends this discussion with renown gathered designating their overall performance – and yes, the PCs could theoretically get a company with Ultimate Battle synergy.

Editing and formatting are top-notch, I noticed no glitches or issues on a formal or rules-language level. Layout adheres to a two-column full-color standard and sports some amazing full-color artworks I haven’t seen before. The pdf comes fully bookmarked with nested bookmarks for your convenience.

Jason Nelson and Mike Welham provide a truly amazing supplement here: Royal tournaments fills a criminally neglected niche in the game, and does so with panache aplomb. The various rules within take the extensive array of subsystems into account without requiring them; the presentation is easy to grasp, and implementing the rules within is next to no work on the GM. The various minigames and events are characterized by being quickly resolved, preventing boredom, though expansion always remains a distinct possibility. If anything, this book, like a good festival or tournament, ended with a somber note for me – I didn’t want this book to end and wished it was even longer! There are few books that manage to elicit this kind of response to this degree. The effortless simplicity of the rules for the contests and games is deceptive, as anyone who has attempted to design such minigames themselves can attest to. Personally, I will combine this one with Everyman Gaming’s superb Skill Challenge Handbook, the latter helping with team-challenges.

So yeah, Royal Tournaments succeeds with a grace befitting of the “royal” moniker at its chosen task; it represents an amazing toolkit for the GM and should be considered to be a must-own supplement. Heck, even if you’re not interested in running a tournament, this is worth getting. Why? Because all of these mini-games are one reskinning away from working as puzzle-challenges or weird obstacles in the dungeon of your choice! This book thus manages to surpass its designated design goal by leaps and bounds and represents, even in Legendary Games’ extensive canon of excellent books, one of my all-time favorite supplements. As such, this is well worth a final verdict of 5 stars + my seal of approval, and this also qualifies as a candidate for my Top ten of 2018. This is pure gold and belongs in any GM’s toolbox.

You can get this phenomenal book here on OBS!

Missed Ultimate Rulership? You can find it here!

The amazing Ultimate Battle can be found here!