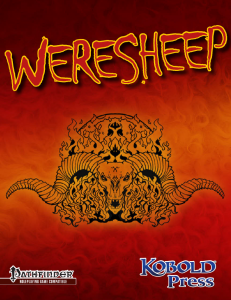 This pdf clocks in at 13 pages, 1 page front cover, 1 page editorial, 1 page introduction/SRD, 1 page advertisement, leaving us with 9 pages of content, so let’s take a look!

Well, before we do – this pdf is one of the cool things that just…happen. What started off as a running joke during the Advanced Races Compendium KS became its own file.

We have to specify what exactly we get here first, though: This does not provide a variant lycanthrope template or the like; instead, this pdf represents an NPC collection of 3 weresheep of the apocalypse. While the concept of weresheep may sound stupid, rest assured that they can be CREEPY and that the NPCs herein are anything but jokes. They, in fact, are extremely deadly adversaries. Each of the three NPCs comes with two statblocks, one for the regular form and one for the hybrid shape, meaning that you won’t have to do any work – kudos there!

On the downside of these builds, it should be noted that the weresheep aspect itself does not yield any specific signature abilities, following PFRPG’s unfortunate decision to streamline all types of lycanthropy, but the respective builds do make up for that in their imaginative potential. They all are CR 15 villains and cover quite a wide array.

All right, enough tiptoeing around the subject matter, the first of these guys would be chosen by Death, none other than Gromek Palebones, a natural weresheep shaman 7. And yes, these do come with flavor-text: “This towering humanoid’s gray skin is ashen and gaunt, and his eyes are sunken into their sockets. He is bedecked in sheepskins and bleached bones, and the great black scythe in his hands slices the air with a moan.” Yeah, your PCs will NOT be laughing at these guys. Gromek’s life-drinker scythe will certainly make sure that they rue the day they cross him…

Goref Tamerk would be a less—in your face deadly adversary: He’d be a gnoll afflicted weresheep oracle devoted to Famine – in his hybrid form, he has a “bleeding sheep skull for a face and a coat of thick, black wool.” Yeah, CREEPY. Have I mentioned cannibal curse, erosion’s touch and the appropriate abilities to make foes really rue the day they went out of bed to don those adventuring clothes?

Thirdly, there would be Lord Silas Nareshorn, the weresheep of pestilence…who would be a human natural weresheep vivisectionist with a seeking hand crossbow that makes for a truly deadly adversary and killer…and the ticking timer of his family’s dread secret drove him towards the horrid plague he seeks to unleash to secure his own fortune and well-being…and his ambitious plan is coming closer to fruition, making good use of his abilities and resources. In fact, that is a component that deserves special mention: The weresheep builds make sense within their abilities and sport some really cool angles.

Editing and formatting are top-notch, I noticed no significant glitches. Layout adheres to a 2-column full-color standard and the pdf has bookmarks in spite of its brevity – kudos! Unfortunately, we don’t get artworks for the NPCs, though the fair price-point makes up for that shortcoming.

The four horsemen deliver three amazing adversaries for high-level PCs in this pdf and the 3 weresheep, universally, are amazing. I noticed no glitches and the builds themselves are appropriate, deadly and brim with cool ideas. While I would have loved to see unique signature abilities, weapons or the like, for the limited focus of this pdf, it most certainly delivers. The absence of a weresheep of war (due to, to my knowledge, the horsemen having had a vacancy back then before Tim Hitchcock joined their ranks) is a pity, though. That being said, for the more than fair price point, this is worth a final verdict of 4.5 stars, though I feel it misses rounding up by a margin.

You can get these deadly…weresheep (never thought I’d write that sentence…) here on OBS!