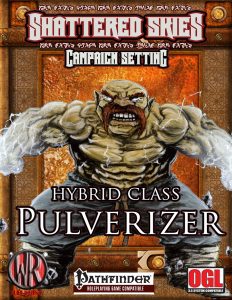 The pulverizer class receives d12 HD, 4 + Int skills per levels, proficiency with simple weapons + handaxe, shot sword and the close fighter group as well as light armor and shields, sans tower shields, of course. The class gains a full BAB-progression, good Fort- and Ref-saves and a monk’s unarmed strike damage progression, with the usual Improved Unarmed Strike at 1st level. They count as Intelligence 13 for the purpose of meeting the requirements of combat feats and treats his level as barbarian/monk levels for the purpose of feats, magic items, etc. The pulverizer begins play with rage, 4 + Con-mod-rounds, +2 per level, with the usual bonuses and restrictions. 2nd level nets Improved Grapple (or an untyped bonus to CMD/CMB).

2nd level nets a rage power, with another one gained at every 2 levels thereafter, but they may not select totem rage powers. The class receives a total of 11 exclusive rage powers. One would be an immediate action bashing aside of incoming attacks via opposing attack rolls (not a fan), but the once per rage limit keeps it in line. Powerful Blow 1/rage (Greater) Cleave is solid, doubling swift foot’s speed when moving in an ape-like gait, gaining ferocious at higher rage round cost. Reflexive Intimidate after being crit, more slaughter rage power uses per rage…interesting. Slaughter? Well, adds coup-de-grace as an immediate action after reducing a foe to -1 hp. Cool!

Entering a rage as an immediate action can be pretty nasty – I’d be careful with that one. Adding damage to attacks that reduce a foe to -1 hp, completing movement after a charge defeats a foe or using elemental smash to cause sonic-damage cones…pretty decent array. At 3rd level, the pulverizer may use Bodysmash as a full-attack action, granting unarmed TWF with full Str-mod and higher levels providing the further TWF-options and the option to substitute combat maneuvers for attacks here, with higher levels providing scaling bonuses to maneuvers beyond the initial boost to grapple. 3rd level also provides bravery and +10 ft. fast movement. 4th level nets Catch Off-Guard (or its Improved brother).

5th level provides close weapon mastery, substituting his unarmed damage at level -4 for weapon damage…which can be cheesed. Not a fan there. The level also nets uncanny dodge. 6th level provides +2 to grapple checks and maintaining a grapple becomes a move action. 6th level nets Object Smasher and 7th, maneuver training. 7th level provides +1/4 level to CMD and grapple and gain AoOs versus anyone stupid enough to grapple the pulverizer. 9th level makes the unarmed strikes magical, 12th level alignment and 17th level adamantine as the type of the strikes. 13th level lets the pulverizer 3 + Wis-mod times per day (+2 at 17th level) substitute energy types as a swift action. Dumb: The energies feature sonic and FORCE, which means it makes no sense to ever choose anything else.14th level nets rock throwing – oddly with the monster statblock formatting information.

The pdf notes the rules for Improved Uncanny Dodge (why?) and features Improved Off-Guard, which renders foes flat-footed against improvised weapons if they fail Sense Motive vs. your Bluff. Broken, even with the 11/24 hour caveat…not gonna start with the second one.

Editing and formatting are solid in the formal area and in the rules-area, though far from perfect in both ways. Layout adheres to a solid 2-column full-color standard and the pdf sports a decent artwork, though I’ve seen it used in numerous publications since the release of this pdf. the pdf is not bookmarked, which constitutes a minor comfort detriment. The text, oddly, unlike in other Wayward Rogues Publications, looks less crisp, a bit muddy, making the pdf slightly harder to read than it should be.

Robert Gresham’s pulverizer is a nice idea: The monk/barb-hybrid is a cool concept and e.g. Forest Guardian press’ Savage class has done a great job depicting it. The pulverizer’s completely different focus is nice here…or should I say: Lack of focus? The class, to me, feels a bit odd – on the one hand emphasizing hard punches, on the other grapples. Lower case attributes make me cringe a bit, as do obvious cut-copy-paste glitches that could have been caught by even remotely careful observation. Which brings me to the big BUT: When the class employs original abilities like elemental smash, I am left with question marks: The ability LOOKS like it means that the elemental energy damage is substituted, while the table suddenly mentions bonus damage. The lack of a grasp of sonic and force being more powerful than all other energies is similarly troubling. Is the pulverizer a horrible class?

No, it does have some solid ideas, but its execution could use more care and in a game that has this many amazing classes, including at least two classes (Savage for Monk/Barb-hybrid, Luchador for the grappling/unarmed gameplay) that do literally everything the class does better, I can’t go higher than 2.5 stars, rounded down.