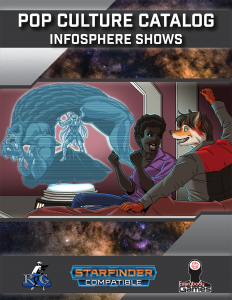 This installment of the Pop Culture Catalog-series clocks in at 25 pages, 1 page front cover, 1 page editorial, 2 pages of SRD, leaving us with 21 pages of content, so let’s take a look!

This was moved up in my reviewing queue as a prioritized review at the request of my patreon supporters.

Okay, so the Pop Culture Catalog series so far is one of my favorite things available for SFRPG, no hyperbole. Since it’s been a while since I’ve covered one of these, let us recap briefly: The core idea of the engine used, is that experiences and interests shape who we are. As such, the series introduces a fandom-engine, which lets you benefit in specific way from frequenting a certain restaurant, enjoying a certain drink, following a certain show, etc. Now, the benefits are nice and all, but beyond mechanical benefits, the system ahs a pronounced further plus side: You start thinking about what shows your character would watch, what food they’d consume – in short, you add depth to the character. Actually roleplaying through the process of becoming a fan of something also is intriguing, as it grounds the game, and provides an interesting change of pace for the party. Beyond that, there is also the fact that the lore in these pdfs tends to be fantastic – some lampoon e.g. companies with various degrees of subtlety, and provide plentiful adventure hook ideas based on unique settings. There is for example that wonderful, high-class beauty spa on the moon where the unfiltered air can cause lycanthropy. In another installment, we have a redesign for drugs and similar vices, which makes them scale throughout the levels! (And yes, I do have plans to use these rules for a stoner comedy in space type of scenario…)

Anyway, you can belong to 1 + Charisma modifier, minimum 1 fandoms at a given time, and leaving one or becoming a fan are rather easy processes as well, which retains a flexibility in play – it’s not a singular character build choice, but one that you can switch and adapt in a flexible manner as the game progresses.

We begin this supplement with the respective infosphere shows – each states its type, its price-modifier, the streaming service where they’re available, and a very quotable tagline. Beyond that, we actually get proper logos for each of them; in case you didn’t get some of the allusions here, the logos will often help. I should mention that, as a German, there are bound to be some references I didn’t catch, no matter how immersed in US-culture I may be. The shows run a VERY wide range of themes and topics: Take #MutantSchool, a procedural set in the MSU (Mayhem Superhero Universe) obviously inspired by the X-men. It doesn’t simply copy the standard heroes of its terrestrial version – it provides its own cadre of familiar, yet distinct heroes. Did I mention an assembly ooze with a puppy’s disposition? Now I want an assembly ooze with a puppy’s disposition of my own! Interesting here on a mechanical level: The fandom perk nets a +1 enhancement bonus to Bluff, Diplomacy and Intimidate against adolescents, since you understand their mindset better. See what I mean regarding the blending of flavor and crunch? Fans of Alluria and the Primordial Princesses’ perk helps dealing with relationships, as codified in the Advanced Skill Guide, to a greater deal than usual for a perk, but balances this against the fact that it only works if the relationship isn’t dysfunctional.

“As the Asteroid Spins” is a soap opera that started off with a high budget, and received a horrendous reception; however, when it was cut down and all but done and over in season 3, said season was so trashy and enjoyable that it attracted a huge fanbase. This one nets you Bluff as a class skill, or a bonus to it f you already have it as a class skill. Prefer reality series? “Cabinet of Curiosities” is a format where curios are presented to a team who then estimates their value – I can see PCs starring there, and, fun fact, the format also exists in Germany, where it’s called “Bares für Rares”, so “Cash for rare stuff.” The fandom perk makes selling items, regardless if they can normally be sold for 10% or 100% of their price, 5% more efficient, which is particularly at higher levels very useful.

The space equivalent of Topgear would be “Catch my Drift”, and it lets you add bonuses to skill checks used for crew actions of skill checks made to pilot vehicles, but has a 10-minute rest (including, obviously, Resolve expenditure) to regain caveat to keep it in line. Ole’ nerdy me also was beaming from ear to ear when learning about “Crimson Goblin”, the tale of Oswald Verr, a dwarven food synthesizer repairman alone on board the eponymous vessel, with only a living hologram, a senile AI and a catfolk as company. Fans of the series can benefit from the Engineering knowhow conveyed, and may use Engineering untrained regarding ships and crew actions, even getting ½ class level as a bonus when doing so; if you are trained, you instead get a +1 bonus to the checks, which, while potentially meaning that you be better untrained than trained, kinda fits the premise of the series perfectly. And in case you haven’t realized the obvious real-world version: Go watch Red Dwarf now if you even remotely enjoy darkly humorous scifi. It’s a cult series for a very good reason.

Dead station features protagonists like a vegan vampire (XD) and is a black satire about a station overrun with undead, who are primarily cast from a nearby planet…but yet, rumors of there being living actors in deadface continue to circulate… Deisauryu (still love the linguistic compound, invoking god of dinosaurs), Xa-Osoro’s Godzilla (fully statted in their own Star Log.EM) also gets their own cartoon-series, and its strong themes of cooperation are represented by the fandom perk allowing you to enhance covering or harrying fire, as well as aid another, with the usual rest + Resolve regain caveat to prevent abuse. Televangelism/a primer to the philosophy of solarians is particularly useful for solarians, who can spend 1/day Resolve to gain one attunement at the start of their turn; and yes, non-solarians also get a benefit. Habitat, Xa-Osoro’s version of Cribs, was recently wrecked by a scandal that unearthed that several shows were actually fakes made with the vidgame Simulacraft Zeta! Shirren police procedurals, medical dramas…but there are also some less cute ones. Pain Game, a kinda illegal show of brutally gory fights, is particularly notorious, as it has so far evaded the authorities. While officially, it’s supposed to be primarily show and effects, there are plenty of people suspecting foul play and actual deaths happening…now doesn’t that sound like a great adventure for your party?

My favorite show herein, though? Well, much to my pleasant surprise, I’ve seen “Rimestone Squox” – which is obviously a take on the phenomenal indie cult-series dealing with Slenderman; since the Tall One (i.e. ole’ Slendy) is canon in Everybody Games’ supplements, this would allow you to do as the Unfiction community (if you’re interested: Check out NightMind’s summaries on Youtube after watching the series, or to get some recommendations) has done, and build your own adventures surrounding the myth. (Also: Yes, I’m one of the guys who bingewatched Marble Hornets obsessively; if you enjoy that show, I’d also recommend Everyman Hybrid; that one starts slow, but becomes REALLY cool.) so yeah, the diversity of shows, genres and benefits provided is pretty wide, with Disney-like shows (Whacky World of Whimsy) and a proper news-show all included as well. The former lets you btw. spend 1 Resolve for a 1d6 surge to a Culture check to recall a culture’s history, the latter lets you reduce the DC to recall knowledge pertaining current Xa-Osoro events by 5, explicitly stacking with theme-based benefits. Balancing-wise, I had no problems here.

After this section, we get a similar treatment for no less than 6 fully-realized streaming services: These include the magic-focused Dweomervision owned by kitsune billionaire Tashinado Tymira, or the horror-streaming service howler (bonus types smartly chosen and balanced with regards to Rimestone Squpx, for example. I know I’d have the latter at the very least, in spite of the rumors that it’s actually a study of 1010 Robotics regarding the effects of fear on intelligent beings. I’d certainly also be interested in the educational streaming platform Icewire, and if you’re into sports, there’s no way past Kapow! The new Disney streaming service’s analogue, UltraWhimsy, btw. also owns the MCU-representation – and in the entry, we learn a bit more about some of the legendary heroes of that universe.

Now, one of the things I always appreciate about this series, is its commitment to actually defining its content – as such, streaming platform types then proceed to be concisely-defined. Beyond that, we get proper prices for pay per views of different quality-levels, subscirptions, vidjacks 6 mks of streamcast modules, prices for autographs, print media, collectibles, trading cards, production drones, and rates for professional actors based on their skill bonus. The items among those, like the streamcast modules, are properly defined, and include holovid editing modules; if “toy” seems too generic too you, by the way, fret not, for different subcategories are presented…oh, and did I mention the level 1-6 technomancer spell mystic streaming? With the rules presented here, you could run a whistleblower/investigative journalism module…just saying…

Editing and formatting are top-notch on a formal and rules-language level, I noticed no serious hiccups. Layout adheres to the series’ two-column full-color standard, and the pdf sports quite a few neat full-color artworks. The company/series-logos are an awesome touch, and I really love them: One look at e.g. the Marble Hornets-version, and fans of the series will immediately recognize it. The pdf comes fully bookmarked for your convenience.

George “Loki” Williams is an excellent writer for this series; considering the exceedingly high standards Alexander Augunas has set, it is impressive to observe that the installment retains the combination of whimsy, imagination and gameable content that made me fall in love with the series. How much do I enjoy it? Well, as some of you might know, I don’t enjoy writing bad reviews – I’m ultimately a fan of RPGs, and I want to see creators rewarded for their efforts, help them improve. So sometimes, being a reviewer can be strenuous. I know how much time and effort flows into many books. Anyways, when I’m starting to feel a bit down, when I want to read something that has a high chance to put a smile on my face, that lacks any issues and makes me recall why it’s also fun doing this? Well, then Pop Culture Catalog is a series that has so far ALWAYS delivered. Reviewing this series makes me feel good, and it puts a smile on my face. It makes the space opera that is SFRPG feel alive, fills in details usually ignored in world-building, and has these satirical touches woven into genuinely interesting adventure hooks that make you smile and jumpstart your imagination. I love this series, and this pdf, in case you haven’t guessed it, continues this impressive streak. My verdict: 5 stars + seal of approval. If you haven’t checked out the series, now’d be a great time – after all, we can all use some good news by now.

You can get this awesome booklet here on OBS!

If you enjoy the series and the vision behind it, you may want to join the patreon Alexander Augunas has started for his upcoming Eversaga RPG. I have seen quite a lot of it already, and it looks amazing!

If you consider my services to be useful, please consider leaving a donation, or joining my patreon. Thank you.