Places of Power: Monastery of the Marble Palm

Places of Power: Monastery of the Marble Palm 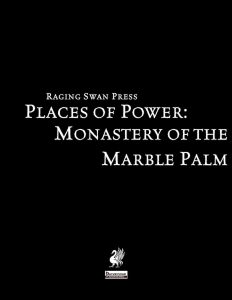 This installment of the Places of Power-series clocks in at 11 pages, 1 page front cover, 2 pages of advertisement, 1 page editorial/ToC, 1 page SRD, 1 page back cover, leaving us with 5 pages of content, so let’s take a look!

On the ocean’s shore, crafted from alien blue marble found nowhere in the vicinity, rises a titanic hand from the landscape, as if grasping towards the sky. The strange structure is impervious to magic and only enchanted weapons have ever managed to mar its facade. Known as Alrakkham’s Glory, some ancient time ago, living quarters have been carved from the structure and those that spend time here tell of strange phenomena, with the marble’s veins pulsing oddly at night and damage incurred due to the common earthquakes in the area mysteriously repairing themselves…

It is here that a tiny enclave of monks is studying their arts and local lore can yield more information for the PCs to unearth about this evocative set-piece. As always, the location is further enhanced by 6 sample events and 6 whispers/rumors – the former do feature rival monk sects, tensions between the two students reaching a boiling point and similarly interesting occurrences. Beyond notes of the lavishly mapped hand-like fortress and its individual rooms, the pdf also features common gossip (Hint: Alrakkham may be Bigby by another name…)…

The monk tradition featured in the monastery actually has mechanical representations here: Monks that study the way of the marble palm replace slow fall with the ability to spend 1 ki as an immediate action to increase the reach of their unarmed attack by 5 feet. – I assume for 1 round, but I’m not sure there. Starting at 5th level, monks that study this way of fighting gain DR 1/- while they have at least 1 ki, increasing that every 3 levels by 1, replacing purity of body. At 13th level, instead of diamond soul, they gain +2 dodge bonus to AC and CMD when facing more than one opponent. Slightly odd: The explicit mention of CMD here. Does that mean they get +4 to CMD? Dodge bonuses, as a default, apply to CMD. The ability increases in potency to +3 at 17th level. Instead of quivering palm, 15th level provides the option to generate grasping hand as a move action supernatural ability. The variant uses the wielder’s Strength +10 (no idea what the 31 in brackets is supposed to mean) and may inflict 1d8 +10 damage when grappling – the damage doesn’t note its type and it’s odd that it’s damage bonus is fixed, considering the variation’s base on the monk’s Strength score. Utterly OP; btw.: This can be done as many times as you like, provided you have at least 1 ki left. Alas, the archetype this represents is pretty flawed and requires some serious GM work to properly work; the rules-language isn’t as precise as it should be.

The CR 14 master of the monastery gets a full statblock, which is neat indeed, and the two pupils currently there also are covered, though fluff only and not in as much detail as usual for Raging Swan Press.

Editing and formatting are generally top-notch, with the exception of the monk tradition being not up to par regarding its rules-language. Layout adheres to RSP’s elegant 2-column b/w-standard and the pdf features some nice b/w-artworks. The pdf comes in two iterations, one optimized for screen-use and one made for the printer – kudos there! The fantastic cartography by Simon Butler and Dyson Logos is excellent. I think by joining Raging Swan Press’ patreon, you can actually get the high-res map for the evocative place, but I am not 100% sure. The map provided is cool, but sports keyed rooms.

Anthony Jennings’ monastery is per se a great, evocative place – and I really, really enjoy the intention behind the monk archetype featured herein…but, alas, in that aspect, the pdf falters. If the archetype worked properly, this would be one excellent installment of the series; as provided, it unfortunately drags down the offering to a final verdict of “only” 3.5 stars – though, if you’re looking for a great little monastery, it’s certainly worth getting for the low asking price. Hence, I will round up for this pdf.

You can get this place of power here on OBS!