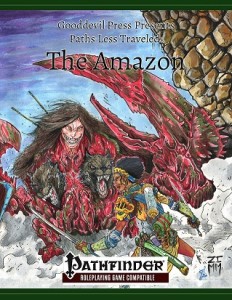 This freshman offering by Gooddevil Press clocks in at 13 pages, 1 page front cover, 1 page editorial, 1 page SRD, 1 page back cover, leaving us with 9 pages of content, so let’s take a look!

The amazon as depicted herein is a female-only, d10, full-BAB-class with good Fort and Will-saves. The class gets 4+Int skills as well as simple and martial weapon proficiencies, light and medium armor and shields, including tower shields. At first level, the amazon receives Amazonian Strike, which adds +1 to damage with piercing weapons, increasing the bonus by +1 at 3rd level and every odd level thereafter. This number may also be substituted for Strength modifier when using composite bows.

…and that’s what you get at first level. No active ability, no player agenda, not even a bonus feat-choice. Granted, this becomes better at 2nd level, but still – why would anyone, ever want to play a 1st level Amazon? Starting at 2nd level, the amazon receives the confidence ability, which nets DR 2/- (+2 at 6th level and every 4 levels thereafter) until “she begins her second round of combat.” Does this include surprise rounds? If so, why? I assume no, since that would make ambushes less preferable, but RAW, I’m not sure. At 9th level, the amazon receives confidence whenever she charges for 1 round. More importantly, the class receives the amazon training class feature, which represents the talents of the class, with 10th and 16th level unlocking advanced and major amazon training talents, respectively.

The talents themselves follow pretty much a formula you’d expect – +10 ft charge and run base speed; class-level-based scaling bonuses to Diplomacy or Intimidate; a witch’s hex at -3 levels; a bonus combat feat; 3/day charm person with male-only targets and a DC of 11 + Cha-mod – the like. Odd: Witch Hexes are governed by Int; The SP is governed by Cha and somewhat odd in that it (and a LOT other abilities) deviate from the “attracted to the character”-default: Why male targets only? What about lesbian or bisexual women? Similarly, selective skill bonuses have the same odd caveat. The internal balance of the talents is a bit odd – when one looks at e.g. a rage power that is always applied when her confidence DR kicks in, one can see amazons that reached 9th level and the charge-based DR execute them indefinitely, which is problematic.

The advanced talents have some odd ones – armor trick, for example: 1/day, as a swift action while wearing medium or heavy armor, the amazon counts as wearing a shield. Okay…so, what kind of shield? Does she get the AC-bonuses? Does she need a free hand to gain the bonus? Does this only apply to Shield Bash and similar abilities? How long does it last? No idea. Similarly, adding amazonian strike to ranged damage at this high a level is odd – if ranged characters did not need one thing, it’s a damage-upgrade. They need versatility. It’s also odd from a build stand-point: You’re primarily the melee gal until 10th level and then suddenly become the ranged monster? Not a fan. Worse, a further talent can double this bonus damage, which can result is pretty ridiculous salvos in the first combat round. Sudden Death. Among the high-level options, bleeding damage can also be found and at 16th level retributive AoOs versus missed AoOs become a possibility. On a nitpicky side, one of the abilities is incorrectly bolded.

As a capstone, the amazon becomes invulnerable (!!!) in the first combat round. The pdf sports a brief write-up of amazons in real world mythology and one for amazons in the setting of Midgard by Wolfgang Baur. The pdf also has a write-up for the olume campaign setting, on which I unfortunately found nothing. Feat-wise, you can select +1 amazonian training via a feat.

The pdf also provides archetypes, the first of which would be the racially-limited Androktone, which loses the amazonian strike to composite bows, but receive an array of special training options, which allow for further doubling of bonuses versus males as well as some other anti-male tricks that basically exacerbate the issues of the main class. The second one would be the Hex Archer, who replaces confidence with the ability to deliver hexes via arrows, learning new hexes at 2nd level and every 4 levels thereafter instead of amazon training. This is pretty OP, with hexes’ only limitations being the daily uses and short range, the latter of which becomes eliminated. Adding in hexes that provide instantly lethal effects via kisses that RAW now suddenly can be executed with arrows and we have an issue. Yes, the hex archer’s list is very limited – but the infuse hex ability nowhere specifies it can only apply the hexes of the class. Similarly, the infuse ability should have a caveat for the type of hexes that can be applied – as written, you can apply all hexes and shoot as a standard action, even if a given hex has a much longer duration. Via a feat, you can also infuse hexes via light melee attacks – I assume, still as a standard action as per the base infuse ability, but again, not sure.

The Onna-Bugeisha, intended for the glorious Kaidan campaign setting and written by Michael K. Tumey would be the amazon/samurai-crossover class, gaining challenge and order, replacing the potentially problematic abilities (i.e.: all) and also working for samurai – over all, the most solid of the options herein and one that is supplemented by a solid new order. On a downside, this one does result in quite a few dead levels.

Finally, Panther Warriors would be the gender-inclusive version of the class, with better primitive/fragile weapon tricks. Additionally, at 2nd level, they can call forth spectral panthers that can’t be attacked or defeated, but which threaten and can perform AoOs taken from the panther warrior. these spectral animals, powerful though they be, can be called forth as swift actions, indefinitely. At higher levels, he can transform into a powerful panther-form (which should be codified as a polymorph-effect) and gains bonuses versus bleeding foes. What? Well, at 6th level, all slashing/piercing attacks and spectral panther attacks cause 1d6 bleed. Yes, that’s pretty hardcore.

The pdf closes with the Muse-PrC, which requires a BAB of +3 and a Will-save of +2 as well as high Cha and some social skills. The PrC nets 4+Int skills per level, an AC-bonus that scales up to +2 (which makes not much sense and contradicts the ability’s wording that instead assumes Cha-mod, which is per prerequisites at least +3), 3/4 BAB-progression, good Ref-saves…and obviously no HD, for the pdf fails to specify them. The muse can choose a class ability from a previous class and stack her levels with her former class levels for the purpose of them. Additionally, she gains Swap Places and the capstone allows for 1/day AoE enemy-action-wasting – though the ability is not sure whether it should be called “Shout of Command” or “Voice of Command.”

The pdf also sports the genderbane magic item ability, which deals +1d4 untyped bonus damage versus the target sex for a +1 enchantment, which feels OP to me, considering there is no means of reducing this damage, unlike the elemental tricks.

Editing and formatting are rather good, also on a rules-language-level – at least, for the most time. The justification for amazonian strike and explanation of the math behind it is sure neat – though the finer intricacies of the rules and their tricks seem to fall by the wayside here and there. Layout adheres to a solid 2-column full-color standard and the pdf does sport some nice, original pieces of full-color artwork. The pdf comes fully bookmarked for your convenience.

William Senn and Matthew Stinson have crafted a decent class here – though one that has some pretty significant exploits just waiting in the wings…but that’s not my issue with this book. With the exception of some of the setting write-ups, this pdf can be summed up in its impact on me in one word: Soulless. I was not alone: When I translated this for one of the kids in my kiddie group, her response was: “Red Sonja can do cooler stuff, I’ll rather make her with the Savage class.” (Released by Forest Guardian Press and vastly superior in every way, just fyi.)

The amazon, ironically for such a great concept, has nothing going for her, but dry, numerical escalation – no unique maneuvers, no tricks, nothing. I’ve seen all components herein in more compelling combinations. Worse, the “unique” benefits are dry, passive ones. There is no feasible in-game justification for the arbitrary DR – does it apply to haunts? Traps? What about surprise rounds? How does this work in-game, within the logic of a given setting? No idea.

It’s not even perfectly functional. When the pdf does try to do something unique, it falls flat with some pretty abuse-open combos and/or dead levels. Don’t get me wrong – this is kind of functional and it sure doesn’t have to be broken – but I don’t get why you’d want to use this pdf. The class tries to support diverse builds, but ends up with a minor identity crisis regarding governing attributes and what an amazon is supposed to be doing with her tricks – there are straight talent-trees and abilities, but they all feel cobbled together, inconsistent and don’t really create a concise identity – which, again, is ironic, considering how amazons are perhaps one of the best known cultural tropes. In fact, this class and all options herein felt like someone tried painting some evocative fluff on a bland mechanical construct, sans really managing to maintain the connection between them. Where are all the tropes we know from diverse mythologies? The Wonder Woman-tricks? Those popularized from pop culture heroines and villainesses? Not in this book.

I tried hard to like this, but neither I, nor my players managed to – beyond the sometimes wonky mechanics, the class just feels like craftsmanship sans any artistry. In fact, I’d go lower, but seeing how the cultural tidbits for the settings provided brief glimpses that interested me, I will round up from my final verdict of 1.5 stars for a final verdict of 2 stars for the purpose of this platform.

This pdf can be exclusively purchased on Paizo at this point. You can get it here. Don’t say I didn’t warn you.