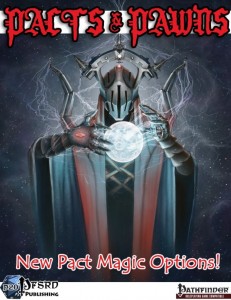 Or rather…not so fast. The first 9 pages are devoted to explaining the basic terminology of pact magic/how it works – while surely appreciated by someone out there, explaining the base system again in the expansion feels slightly redundant to me, but I’m not one to complain about that – there’s nothing wrong in this approach.

We begin then truly new content herein with a chapter on new spirits, first of which would be the 3rd level hero constellation spirit Cort Eiding, the golden gunman – a notoriously indebted gunman, Cort was a mercenary through and through and thus, the totems the spirit has to ease binding him include high-stakes card games – nice! Now I am not a big fan of ranged combat maneuvers, however, the reduced versatility of them somewhat helps and the cool-down also serves as a balancing tool. Not 100% comfortable, but in the end, an okay option to represent the concept. Constant undetectable alignment may be a bit strong. Buying bonuses for gold is pretty neat, but another ability is somewhat cool, but problematic – Sulphur City Shuffle drops an explosive at the feet of a feinted foe, which can be ignited by fire to explode. Per se, damn cool! However, can the explosives be noticed? Thrown? Moved? Disabled? No idea. Pity, really, for the balance with charges in gold that prevents abuse is pretty nice. Speaking of which: Cort’s vestigial companion, the intelligent +2 revolver Last Word and the ability to detect pact spirits as per the new spell are pretty awesome and made me fondly flash back to the Dark Tower.

The 4th level Fiend spirit Arkensang, Fortune’s Apostate. Once a barbarian who subverted a prophecy of a goddess of death, this one favors the godless and maimed. Per se flavorful, this one’s implication has a vast impact on a given game world. These guys may sever the threads of magic on targets, implying that magic works via threads between the target of a spell and its caster – so what about non-instantaneous effects? Magic items? Accepting this ability has severe implications for the logic by which magic operates AND it is by no means exhaustive enough to work. Which is a pity, for the concept is cool and the added debuff effects for capstone empowered severances sounds like a cool idea. Why not use Spell Sunder as a base-line and instead use this convoluted strands of magic-concept? The wilderness/anti-divine tricks the spirit grants beyond these is pretty nice and one-handing appropriate-sized two-handed weapons also is a rather nice ability per se…but what about abilities that apply to 2-handed weapons and definitely need two hands to execute? Two-handed weapon exclusive feats etc.? Do they still apply?

The third spirit, Ia, the illuminator, a 9th level Dark beyond spirit, allows you to generate difficult terrain AND untyped damage and even sanity-draining fascination. Also rather cool – you leave trails of difficult terrain and receive quite an array of cool tricks – what about damaging e.g. all creatures adjacent to the squares you land in after falling (which does not cause damage to you anymore!)? Two thumbs up for this spirit!

Next up would be new archetypes, e.g. the haunted occultist. These guys receive only 1/2 binder level, but may sick spirits upon targets, who then have to save against the binding check. The more personal components (like true names, blood, etc.) are available, the easier the haunting. The spirits haunting a target confer none of their abilities, but do confer the modifications of behavior upon those that fail their save, making this essentially an offensive use of spirit#s behavior-changing components – pretty…interesting. Why? because Pact Magic is often depicted as stigmatized, which provides sheer endless potential for cool narratives. On the other hand, the spirit’s compulsions usually are neitehr crippling, nor particularly effective in properly scourging the foe as opposed to regular curses – an added debuff would probably be appropriate in face of the halved binder level. Now on the cool side, the bonus here would be the option to call upon the vestigial companion to attack and try to kill the haunted target for binder level minutes, which seems pretty limited regarding the ability only delivering the companion within one mile of the target -who is the only one who can see it or is affected by it. This, on the other hand, is simply glorious – though it needs precise rules-codification – does the haunting companion just benefit from invisibility or does it simply not exist for other creatures? Can e.g. blind attacks into its square by non-haunted characters dispatch it? Awesome ability, but needs clarification. At higher levels, the archetype may add further debuffs to the targets of their hauntings. Here, wording is a bit wonky “-1 insight bonus to AC and CMD” are not proper PFRPG-rules-language. At higher levels, the archetype also receives sneak attack and allows you to treat haunted creatures as flanked. The progression is pretty solid and at high levels, the haunting companion can remain manifested for a *long* time. Damn cool, high concept archetype that needs its rough edges polished off and its balance slightly adjusted.

The Legion Occultist does not bind spirits to her own body, instead binding them into effigies of either straw and mud (later also ice, wood, stone and iron); 4 basic shapes are provided and while the effigies are constructs, but are treated as animal companions for progression purposes, with binder level = effective druid level. Spirit personalities influence the effigies and going against a spirit’s wishes damages the effigy. Constellation Aspect has a slight wording glitch, with the text having the potential to be misread to apply all constellation aspects to all effigies, when they instead should only receive their respective constellation aspect. Problem here – do the effigies have to be commanded as if an animal companion? If so, a list of tricks they have would be nice, as well as information on whether the archetype can teach effigies possessed by the same spirit over and over tricks.

The final archetype, the soul armorer paladin/antipaladin archetype, receives diminished spellcasting and never suffers from the effects of bad pacts. Good pacts allow for the use of major granted abilities, but only against the favored enemy of the spirit. Falling from grace, if applicable, renders the pact immediately poor. Soul armorers may smite the enemies of their bound spirits. There is some confusion regarding the effective binder level here – while it is obvious that the class was intended to count as binder level -3, that conflicts with binding at first level and the 5th level ability that makes class levels count as occultist levels for angel or fiend constellation spirits respectively, make this more palpable. Clarification on effective binder levels here would help.

The second part of the pdf presents rules for cults and covens – including generic awards, prestige and statblocks containing information on obeisance, service period, initiation tests and excommunication criteria – fame + prestige point mechanics help streamline them into PFRPG. Kudos! From the Cthonocracy cthulhoid kingmakers to the anti-deist Cult of Man to the enlightened Lantern Collective and Ia’s exceedingly well-spoken doomsday cult to the Hall of righteous pain, the cults are all cool and the feat supplementing membership in a cult is also solid.

The pdf closes with some previews of Pact Magic Unbound 2.

Editing and formatting are pretty good on a formal level, not always perfect on a rules level. Layout adheres to a relatively printer-friendly full-color two-column standard and the pdf comes with full bookmarks. The pdf comes fully bookmarked and the pdf provides hyperlinks.

Michael Massey delivers a nice expansion to pact magic – while it does contain less content than one would expect from the page-count, I won’t hold that against the pdf. Why? Because the ideas are pretty awesome. The spirits and archetypes are high-concept, one and all, and surprisingly, author Michael Massey manages to deliver quite a few complex rules-tricks one rarely sees among the repertoire of new authors. That being said, the crunch does suffer from some unpleasant rough edges and ambiguities that need to be taken care of. And honestly, I’d usually probably come down harder on this pdf than I did in the review, but the ideas herein are, more often than not, inspiring. Now if you are not interested in the cults herein, the pdf loses some of its appeal – they are pretty awesome and should fit pretty seamlessly with most worlds, especially with settings à la Vathak and Ravenloft/darker campaigns – I loved these.

So fluff and idea-wise, we have a winner here, though the complex crunch does have some issues, and not all of them minor. Now if you’re, as a DM, comfortable with making rules-decisions of the slightly more complex variety, then go for this neat supplement. If you want your crunch polished to a gleam, you may want to take a very careful look before allowing this book. So is this good? It is high-concept. Its execution may not be perfect, but it *is* an inspiring read and the content herein does make for a compelling assortment of material, for cool narrative potential – while e.g. the haunting oracle’s terminology is sometimes mixed up, while the soul armorer sometimes still is called “paladin”, the general concepts are just nice and daring. Conceptually, this could have been a 5 star killer file with a good developer, but as much as I like the content, the flaws are there – hence, I cannot go higher than 3 stars with this one. Still – kudos to the author and congratulations for a solid job for a newcomer!

You can get this Pact Magic-expansion here on OBS and here on d20pfsrd.com’s shop.