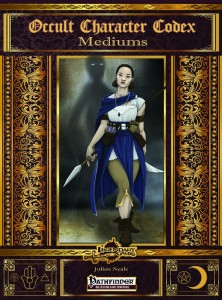 This installment of the Occult Character Codex-series clocks in at 28 pages, 1 page front cover, 2 pages editorial, 1 page ToC, 1 page how-to-use, 2 pages of advertisement, 1 page SRD, 1 page back cover, leaving us with 19 pages of content, so let’s take a look!

Occult Adventures is a great book, but the rather complex classes in the book do provide a challenge regarding time-investment to create sample NPCs. This is where this series comes in for the time-starved GM – basically, we have a collection of characters herein, spanning the CRs from 1 – 20, all ready and set for your perusal.

So how were they made? Well, for one, the builds use Pathfinder Unchained’s automatic bonus progression, which means that the characters have a better chance to stand against the PCs sans flooding the campaign with magic items. The builds are not made to be sheer exercises in powergaming superiority that exist in a vacuum, instead championing the approach of making viable characters that work concisely as though they were proper characters, complete with a brief personality sketch, but expect no lengthy elaboration of motivations etc.. Options and buffs are included in the statblocks, though handy pre-buff sections provide the information sans them, should your PCs be able to catch the character unaware. There are also some minor pieces of advice for GMs using the character

As far as diversity of the statblocks is concerned, there is, particularly concerning the racial variety, enough going on: Beyond the core-races, we actually get e.g. centaurs and berbalangs. Now, as in previous installments, e.g. the berbalang and centaur-builds look similar in archetypes used, but that similarity comes apart almost immediately once you take a look at feat-choice, spells etc. – so no, no boring straight progressions.

Archetype-wise, we slightly deviate from the formula established by the series – that is, this time around, three archetypes are used in builds: Here, that would be the relic channeler and the storyteller and we also get a reanimated medium – unfortunately, the others aren’t covered. On the plus-side, the tactics-section for the respective builds is relatively detailed and the statblocks include buff-suites, where applicable as well as stats for the unbuffed iterations of the respective character. Now, class-specific things to consider would be the following: The mediums presented here are presented with the spirit they usually channel – different spirits obviously have different ramifications. The general selection of spirits featured in the builds is pretty diverse. Taboos have not been preselected – an array of suggested taboos would have been nice. The pdf also noted that archmage’s spells do not suffer from arcane spell failure and tactics are based on mediums not gaining additional influence.

Julian Neale’s collection of mediums is diverse, concise and covers a significant array of different roles and builds. While I would have loved to see all archetypes covered, I get why not all of them are part of this pdf’s cadre of NPCs. All in all, this is a solid collection of NPCs that does what it says on the tin. My final verdict will clock in at 5 stars.

You can get these mediums here on OBS and here on d20pfsrd.com’s shop!