Bullet Points: 7 Feats for the Shaman 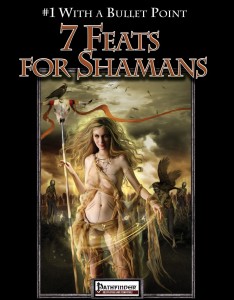 -Rebuke Spirit: As a standard action, cause all spirits within 30 feet to take 1d4 damage per class level, will for halved damage. Useable 3+cha-mod times per day.

-Spirit of Ancestors: This one is complex, since its benefits depend on the shaman’s totem; Gaining animal empathy, +2 when devoted to a single task (but -2 when spreading attention), better perception/appraisal and ferreting out dirty secrets, quicker see spirits and bonus to saves versus illusions, +1/2 class level to knowledge-checks (with a penalty for all non-class non-knowledge skills), a bonus versus fear but incur the surprised penalty for two rounds instead of one or the option to net allies bonuses on successful cha-checks at the cost of arrogance-related penalties.  Per se cool ideas of further distinguishing the respective totems, though I’m not sold on the extended surprise round – I assume that being flat-footed is part of the penalties, but since the wording is a tad bit opaque, I’m not sure. Anyways, it feels a bit off when compared to its benefits.

-Spirit of Retribution: When your companion is destroyed, the creature that deals the final blow incurs HD times 1d4 damage – will-save for half. Unfortunately, the feat does not specify against which DC the save is – I assume something akin to either the standard for spell-like abilities, but I’m not sure.

-Spiritual Blessing: When using a healing spell or healing class ability on an ally, other allies within 10 ft of the target get 2+cha-mod temporary hit points. I assume these cannot be dispelled and last until used up since the feat doesn’t specify otherwise. Problematic here – in theory shamans might use their 0 level spells to buff up allies every day prior to combat. While temporary hit points from one source don’t stack (which would have rendered this one broken), a good cha-score and 0-level spells suddenly deliver quite a bunch of hp. Personally, I don’t like the thought of my group’s charismatic Shoanti shaman adding 5 temporary hp to all allies prior to any battle – 5 times per day. Your mileage may vary, but further clarification it doesn’t work with 0-level spells could help.

-Spiritual Eyes: +4 to perception when with spirit companion in 30 ft, +8 when having more than 10 ranks. Okay, but feels a bit like filler.

-Strength of the Spirits: Reroll saves versus mind-affecting magic as an immediate action. Does not stack with other rerolls. Weird: Prerequisite specified 5th level, but the feats mentions “At 5th level, if you are targeted…” – why? Was there a benefit cut here?

Editing and formatting are good, but by far not up to SGG’s excellent track record – duplicated information and slightly less concise writing than usual plague unfortunately this pdf. Layout adheres to the elegant 3-column landscape-standard and the pdf has no bookmarks, but needs none at this length.

I really like the shaman and my player was looking forward to more fodder for it and this pdf does deliver – though with more rough edges and ambiguities than I’ve come to expect from Super Genius Games. Idea-wise, these feats are cool and awesome, but in execution, their benefits seem a bit off, some minor incongruities remain..and in spite of offering some cool options, as a reviewer, I can’t go higher than 3 stars – were the content not that nice, I probably would have gone lower.