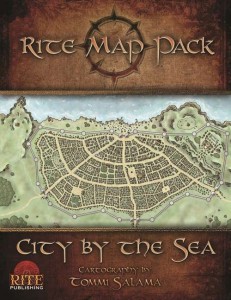 This map pack depicts a City by the Sea on 16 pages, 1 page front cover, 1 page editorial, leaving 14 pages for the maps, so let’s take a look!

The first map depicts a massive, walled city by the sea, with streets connecting organically gates with the area around the harbor and one section of the city on a hill. It should be noted that unlike Port Shaw, Freeport etc., there is no huge harbor here, but rather the harbor can be considered just one part of the city, not one of its defining, center features.

The second page also has the city, this time depicted horizontal – with a truly jarring white box of text on the parchment-like header and a similarly jarring list of important buildings. Layout-wise, these white, angular boxes on a background of parchment are a total disaster that thankfully only mars this one rendition of the map – until you click on it, when the white box disappears. Printing it out, the boxes disappeared, but for those of you aiming to use this incarnation of the map online or via tablets should be aware of that.

Edit: I’ve been made aware of the fact, that my copy seems to be the only one suffering from this glitch, independent of the system on which the pdf is opened. Some weird personalizer-issue, I guess. So ignore that part

6 pages each, both in b/w and full color, depict the city in a larger version.

Tommi Salama is a glorious cartographer, and he obviously is just as at home with city maps as with battle maps – and this one comes beautiful indeed – craftmanship-wise, tehre’s nothing to complain. A minor downside would be the lack of bookmarks to e.g. the b/w-version -while a marginal gripe, it still would have been nice to see.  The pdf is also accompanied by an array of 4 cool high-res jpegs with and without labels. Internal logic-wise, I also have a minor gripe – for a city constructed so all roads lead towards the harbor, said harbor is VERY small when compared to the size of the city. My final verdict will clock in at 4 stars.

You can get this nice city map here on OBS and here on d20pfsrd.com’s shop.