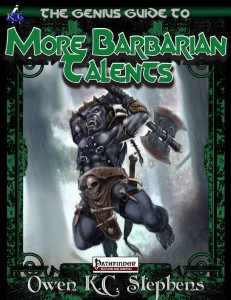 The expansion for the superb talented barbarian clocks in at 10 pages, 1 page front cover, 1 page credits, 1 page SRD, leaving us with 7 pages of content, so let’s take a look, shall we?

A total of 4 new edges are provided – one to make an animal whisperer (wild empathy, then non-magical charm effect -wrap your head around that!), one to further improve cleaving, one for a mule-style barbarian with more carrying capacity/better str-checks and one to grant immunity versus compulsions, but with the caveat of including a higher-HD-by-4-caveat similarly to how sneak attack versus those tentatively immune to flanking is handled.

A total of 24 talents are also part of the deal, covering wild empathy, being able to appraise non-magical objects/getting a kind of pidgin means of communicating simple concepts, speaking with animals of her form while skinwalking at will, one that lets you treat a very select array of weapons as a lighter category, improvise objects, becoming harder to get by failing respective saves and gaining bonuses while under negative conditions. The latter is a problem, at least a minor one – while I get the design intent here, the reality of the game will see more than one barbarian with this talent asking his/her compatriots to inflict e.g. bleed damage on them to get the melee damage boost (hey, +2 to damage ain’t that shabby…) – too metagamey in the way it will be (mis-)used for my tastes. Kind of weird would be head smash – unarmed attacks with the head, executable sans AoO and even when grappled or pinned, but deals half damage to the barbarian. Again, I like the idea, but the execution would probably not see me ever take it unless I had a DM who used super-grappler foes all the time. On the other end, half damage from all falls and never landing prone when falling AND +2 to CMD versus trips? Yeah, can see that one.

Rather disappointing for me was also the way in which blood oaths are portrayed herein – when below half max hp (Hello, 4th edition design!), a barbarian may once per day choose one of 4 bonuses – none of which are too strong and require line of sight with the target of the oath and a relatively short duration, but still. Kind of anticlimactic and not like an epic blood oath of vengeance, more like a minor revenge theme. Better bracer-fighting and a talent that nets bonus hp when not wearing armor and the like, on the other hand, help quite a bit with some character concepts. One of the 4 greater talents allows you to execute two combat maneuvers at once as a standard action and -2 to either. A complex one here…on the one hand, there is nothing per se wrong with this one per se thanks to the action-economy-caveat, it is still one that somewhat leaves me with a bit of hesitation, especially with the grand talent that 1/round allows the barbarian to add yet another maneuver to a combat maneuver or attack – and since there’s no other caveat, that means potentially three combat maneuvers in one attack – and I *know* there are some creature/build combos that can do very nasty things with combos like that… Getting a final attack when being downed or killed on the other hand is a rather neat one.

We also get 7 new rage powers and they are interesting – more CMD and more importantly, an AoO if a maneuver fails against the raging barbarian (even if otherwise not provoking one from the barbarian) -yeah, these I can see. Draw Aggression deserves special mention – when a foe the barbarian threatens targets a foe other than the barbarian with a spell, ability or attack, the barbarian gets an AoO – add reach, have fun. Seriously, nice way of making the aggression drawing work. Getting a free round of rage for being critted, on the other hand, at least theoretically fails the kitten test in a very minor way – while theoretically, the rage could be infinitely prolonged by crits of declawed kittens, in practice, it’ll be hard to maintain. Still, not particularly elegant design in my book. Getting a shaken-inducing defense versus mind-inföluencing effects on the other hand – yeah, neato! Ditto for inciting minor, detrimental rages and a fast intimidate (swift or immediate action) upon entering a rage.

The pdf concludes with a list of the edges, talents etc. by theme – nice to have!

Hmm…this one left me with mixed feelings. On the one hand, the further exploration of skinwalking/animal-whisperer-style tricks is cool – as is the fact that some of the abilities herein make vambraces more viable and help unarmored barbarians. The thing is – they, at least in my book, don’t do enough to offset the downside of not using armor in the long run – some further talents/edges to improve this conceptual path would have been more than cool. After all, unarmored barbarians, frothing at the mouth while charging those pansies in their shining mail are a staple of fantasy art – a step further in that direction would have been awesome. Usually, the “More X Talents”-series has provided some of the more iconic, cool talents, unique options etc. – and this one does so as well…but also uses quite a bunch of rules-solutions that are slightly less elegant than what I’ve come to expect from the series. Overall, a few of the talents herein left me either shrugging or simply not sold on their viability. Now don’t get me wrong – chances are, you’ll find at least some cool tidbits to use herein, but compared to previous installments, this one’s mechanics felt a tad bit less streamlined to me, with some reflexive abilities tied to negative conditions and the like. While the wording is water-tight enough to prevent copious abuse, some minor metagamey moments might well arise from this one. All in all, I can bring myself to rating this higher than 3.5 stars, rounded down to 3 for the purpose of this platform, with the caveat that talented barbarian-fans should probably still take a look, but carefully check with their DM regarding the talents herein.

You can get this expansion to the awesome original pdf here on OBS and here on d20pfsrd.com’s shop.